If you are agonizing over the poor performance of your energy investments in 2014, you aren't alone. Plunging oil prices have sent the entire sector on a ride that is almost the exact opposite of the S&P 500 this year. 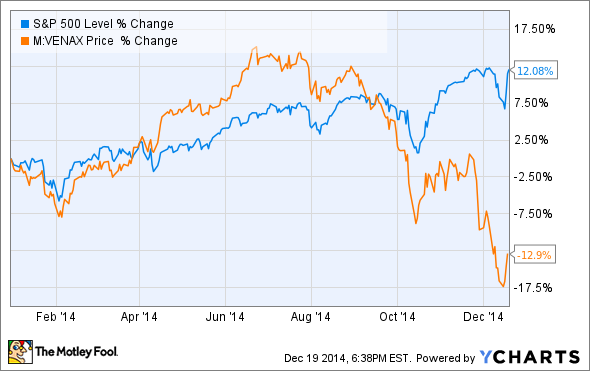 But hey, it could be a lot worse! You could be invested in one of these five energy companies that were the worst performers in the space in 2014. For those of you who are -- myself included -- my condolences. Let's look at what went wrong with these companies this year and what might turn them around. 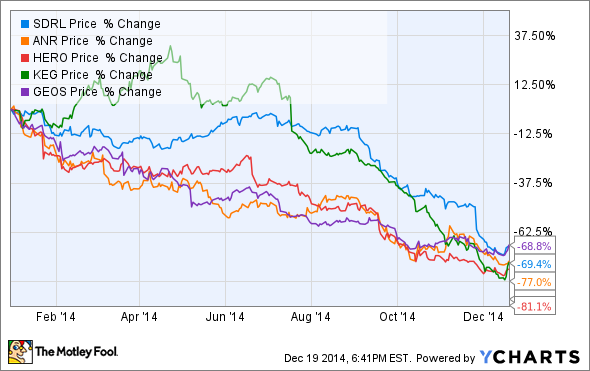 No. 5: Geospace Technologies (NASDAQ:GEOS), down 68%
It was a tough year for oil and gas equipment and service suppliers as the price of oil plunged. Many investors have anticipated that this will result in a major reduction in drilling capital expenditures in 2015 and possibly beyond. This issue was compounded for Geospace Technologies, because its specialty service is closely tied to offshore and deepwater exploration and production. Since this is some of the most expensive oil to produce, these are among the first projects to go when finances tighten, putting particular strain on Geospace.

To make matters even more difficult, a major supply contract with Statoil ended this year, and revenue hasn't really picked up since then as Geospace has not found replacement contracts. The one bright spot is that Geospace has a relatively clean balance sheet that should allow it to endure a downturn without too much trouble.

No. 4: Seadrill (NYSE:SDRL), down 69%
In some ways, Seadrill's woes are similar to those of Geospace. Its fleet of ultra-deepwater drilling rigs and harsh environment jackup rigs are tied to high-cost barrels of oil, and the slump in oil prices means many of Seadrill's clients will be less inclined to go searching for oil. Adding even more trouble is that Seadrill and every other major offshore rig owner face a major oversupply of rigs in the market.

Over the long term, Seadrill's young fleet should capture market share from other companies that have older, less-effective rigs. In the meantime, Seadrill has possibly the worst balance sheet among its peers, with loads of debt on the books. Seadrill might not look attractive during this rough patch, but once through it the company should be better positioned than its competitors.

No. 3: Alpha Natural Resources (NYSE: ANR), down 77%
Oil isn't the only commodity market suffering right now. In fact, you could probably argue that coal is having a rougher time these days. Today's thermal coal spot price for central Appalachian coal is $51 per ton, which is considerably less than what Alpha can produce that coal for on a cash per ton basis. While Alpha has some slightly profitable sales in the Powder River Basin, that has not covered the losses on its Appalachian operations.

The outlook for coal does not look too promising, either. Coal use is in structural decline in the U.S. as old power facilities are retired and it becomes too costly to build new plants that meets carbon emissions standards. Throw in Alpha's less-than-stellar balance sheet, and you have the recipe for a company that could struggle mightily in 2015.

No. 2: Key Energy Services (OTC:KEG), down 75%
What a surprise, another small oil and gas equipment and services company that is heavily tied to expensive oil. Key Energy suffers from specifically servicing horizontal and hydraulically fractured wells. With the major drop in oil prices, many of Key's clients will scale back their drilling programs, reducing demand for Key's services.

Another nagging issue is that Key can't quite compete on the scale of the Halliburtons or Schlumbergers of the world. Key has an international footprint, but the foreign countries in which it operates -- Russia, Colombia, Ecuador, Oman, Bahrain, Mexico, and Canada -- all rely on high oil prices as well. Persistently low oil prices could dig hard into Key's profitability.

No. 1: Hercules Offshore (NASDAQ:HERO.DL), down 81%
Yet another offshore rig owner on this list, but one with problems beyond the macro issues impacting the entire industry. Along with the price of oil and oversupply of rigs, Hercules is also faced with the fact that its fleet of jackup rigs is old. Of the 25 rigs on the company's books, 20 are more than 30 years old and are approaching retirement.

Unlike Seadrill and its young fleet, Hercules owns rigs that are at the highest risk of being scrapped even as new rigs enter the market. With an already-strained balance sheet, it will be increasingly difficult for Hercules to revamp its fleet with new rigs, which will make 2015, and even beyond, difficult for the company.