Plenty of tech companies are dipping their toes into the Internet of Things water. And then there are companies like Silver Spring Networks (NYSE: SSNI) that have jumped right in -- for better or worse. This company is a smart-city pure play, making connecting meters, lighting, and other city connections.

These are promising technologies, but Silver Spring's stock has been anything but promising. Since the beginning of the year, shares are down more than 60%. 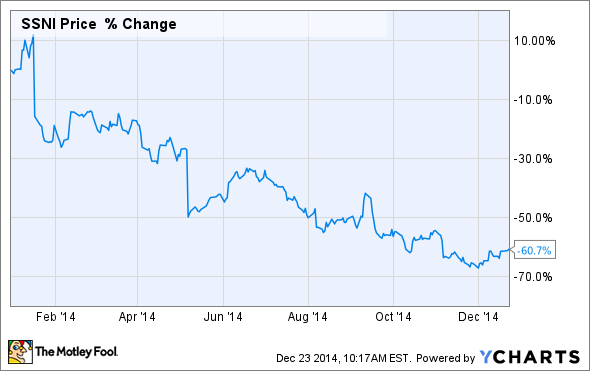 A year to forget
At the beginning of January, Silver Spring revised its first-quarter guidance down due to software contract delays. The company said that while it had long-term contracts, it had not been able to bill for some of them in the fourth quarter. The stock fell about 23% on that news, and has been declining ever since.

More bad news came in May when the company reported first-quarter revenue of $71.8 million and an adjusted loss of $0.19 per share. Wall Street was actually expecting more of a loss, but the main problem for investors was that Silver Spring's revenue fell 3% year over year.

"As we said on our last call, we expected a softer first half 2014 as some of our newer customer deployments are taking longer to ramp up," CEO Scott Lang said on the earnings call. He added that some of the company's customers had "delays in decisions," which hurt revenue projections for the rest of the year.

This clearly did not reassure sharholders, particularly as Lang had said in January the company had a backlog of deals, "And as those projects ramp up, I believe that we will return to growth in the back half of 2014, and 2015 is already taking shape."

Contrast that with his comments on the May earnings call: "Based on looking at our backlog and our pipeline of opportunity, we expect strong growth in 2015 and gross margins to expand." Apparently, investors should continually look to the future and dismiss the ongoing backlog of deals.

Silver Spring has for a year now talked about its potential deals, yet has fallen short of its own projections as it waits for more revenue to materialize.

In June, Goldman Sachs put Silver Spring on a list of top Internet of Things stocks, and slapped a buy rating on the company. Four months later it downgraded Silver Spring to a neutral rating, saying, "While Silver Spring has added to its backlog YTD (now at approximately $1 billion, up from $875 million), revenues are on track to decline 13% in 2014 due to an air pocket between deployments." Goldman mentioned that while revenue in 2015 should improve, it believes that revenue is already included in Wall Street estimates. Basically, revenue will increase next year, but it's not going to be the windfall investors are looking for.

What to expect in 2015
While Silver Spring might see more revenue from its backlog, I would have a problem investing in the company today considering that it continually falls short of its potential. On the bright side, Silver Spring ended the third quarter with $110 million in cash and investments, and no debt.

But I think this company is a prime example of the volatility of pure-play Internet of Things stocks. While the upside is tremendous, if lucrative deals and subsequent revenue don't come at the right time, investors get burned. That is exactly what's happening to Silver Spring right now.