Quiet markets generally dominate the week between Christmas and New Year's Day, and Monday was no exception, with the Dow Jones Industrials (DJINDICES:^DJI) trading at breakeven as of 12:25 p.m. EST. Broader markets were little changed as well, as traders pointed to a slight rebound in oil prices to justify the generally positive trends in stocks. Yet even though Dow investors have enjoyed a roughly 9% gain in 2014, they still have every right to be disappointed, because two other less-followed Dow averages crushed the Industrials this year. For those reassessing their investments at year's end, the big question is whether these outperforming markets could beat the Dow again in 2015. 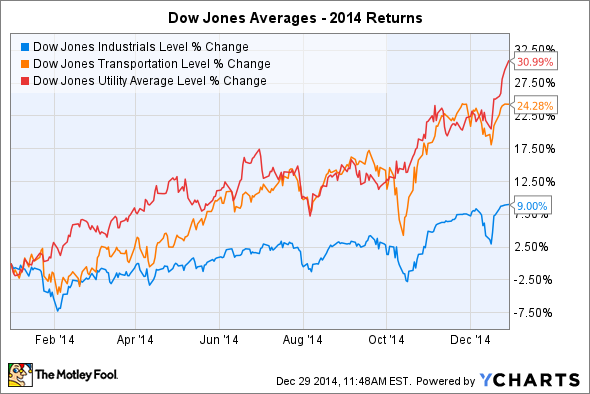 Many people don't realize there is more than one Dow average, especially since the broad Industrial Average includes stocks from sectors ranging from industry to consumer goods to technology. Two other Dow averages look at more focused parts of the market, and both the Dow Jones Utilities (DJINDICES: ^DJU) and the Dow Jones Transports (DJINDICES: DJT) have this year dramatically outperformed the Industrials.

Why the Dows diverged
Utility stocks have soared more than 30% in 2014 for a very simple reason: interest rates again defied expectations. Coming into the year, most investors believed the Federal Reserve's gradual pullback from its quantitative easing program would cause long-term interest rates to rise, and rising interest rate environments tend to be bad for utility stocks. Because utilities don't have much opportunity for growth, most of the appeal for their stocks comes from their relatively high-dividend yields, and those dividends become relatively less attractive when bond yields rise. Yet interest rates remained low throughout the year, and long-term rates actually dropped substantially, falling from nearly 4% for the 30-year Treasury at the beginning of the year to about 2.75% as of today.

A number of favorable factors contributed to the Dow Transports' gain of nearly 25%. Airline stocks continued to press higher, with American Airlines Group (NASDAQ:AAL) more than doubling in 2014 and other major carriers posting gains that were nearly as strong. Rising strength in the economy heightened demand for air travel, and most carriers attempts' to reap additional profits from ancillary fees such as charging for baggage have taken permanent hold in the industry. Moreover, the plunge in oil prices has led to immense cost savings for airlines, and also for fuel-intensive railroads and trucking companies, all of which benefit when energy costs make it less expensive to carry on their operations.

Looking to 2015, the Dow Utilities' prospects don't necessarily look as favorable as they did this year. Interest rates have already fallen substantially, and the Fed has signaled its intent to start raising rates to more normal levels in the near future. Even if the economy slows, it's unlikely that long-term rates will fall substantially enough to produce a 30% gain again in 2015.

For the Transports, though, favorable fuel prices could bring continued gains well into the new year. If the broader economy gets a shot in the arm from lower gasoline prices that translate to more disposable income for consumers, then the companies that carry passengers and goods from place to place could benefit immensely if oil prices stay low for a while.

A nearly 10% gain for the Dow Jones Industrials is nothing to be disappointed about. But the outperformance from the Dow Transports and Dow Utilities is a good reminder that looking around for the highest-potential opportunities is always a smart move.