Please ensure Javascript is enabled for purposes of website accessibility
Free Article Join Over 1 Million Premium Members And Get More In-Depth Stock Guidance and Research
By Matthew Frankel, CFP® - Dec 29, 2014 at 7:03AM

Fannie Mae and Freddie Mac's largest common stockholder thinks shares could be worth a lot more then they are trading for. Will he be right?

After rebounding from pennies per share just a few years ago, Fannie Mae ( FNMA -2.63% ) and Freddie Mac ( FMCC -2.93% ) have dropped again, each trading for around $2 per share. Despite this fact, many investors and some hedge fund heavyweights like Pershing Square's Bill Ackman, are putting a lot of their energy (and money) into the mortgage giants, hoping for an eventual payday.

Ackman has made the case several times that both companies could be worth well over $20 per share if the pending litigation involving the agencies is decided in the shareholders' favor, but that's a pretty big "if." Here's where things stand, and what could happen in 2015.

What's going on with Fannie and Freddie? (The short version)

The short version is that Fannie and Freddie shareholders are outraged that the Treasury unilaterally changed the agencies' profit distribution once they started making money. Now, 100% of both companies' profits go straight in to the U.S. Treasury as "dividends", meaning that the bailouts given to them during the financial crisis will never be paid back.

Naturally, shareholders think they have a solid claim to some of the profits, and it does make a lot of sense. After all, a lot of these people bought or held onto their shares when they were trading for as little as $0.10 and the agencies were left for dead by many market experts. They took the risk, now they want some of the reward. Sounds reasonable, right?

Plus, Fannie and Freddie have actually paid back more to the Treasury already than they received in the bailouts. In fact, as of the most recent quarterly earnings report, the Treasury has received $225 billion in "dividends", which is about $37 billion more than the amount of the bailouts. Shareholders seem to think that's enough.

However, shareholders suffered a major setback a few months ago when U.S. District Court judge Royce Lamberth dismissed several shareholder lawsuits, ruling that the Treasury has the right to take Fannie and Freddie's profits due to the Housing and Economic Recovery act. This is what caused shares to fall to their current price range. 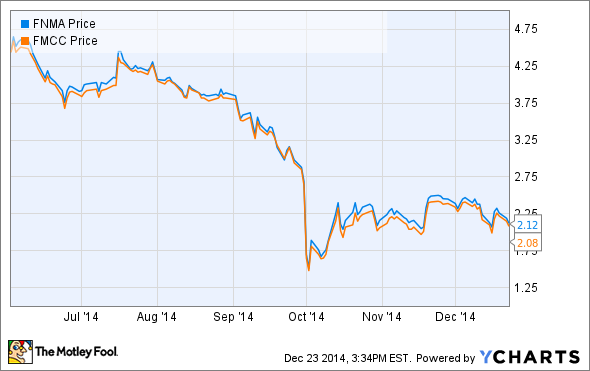 So, what happens next?
It's important to mention that the dismissal didn't include a bunch of lawsuits, including some high-profile ones like Ackman's. Ackman actually filed a voluntary notice of dismissal for his suit in the same court as the dismissal, and there is currently a back-and-forth going on to determine whether he can do that. In the short-term, it's entirely possible Ackman will lose this battle and have his lawsuit (involuntarily) dismissed by Judge Lamberth, which could cause another negative reaction by shareholders.

Regardless, Ackman and several other shareholders have lawsuits filed in the U.S. Court of Claims. These will be heard by a different judge, and the plaintiffs seem rather optimistic of a positive outcome. While it's impossible to know exactly when something will actually happen with these, it's probably safe to say that we'll get some clarity on the future direction of the litigation in 2015.

In fact, just last week Ackman announced that he has added to his positions in Fannie and Freddie, emphasizing that returning the agencies to the private sector and allowing them to recapitalize is the only responsible way to protect the U.S. taxpayers from further liability.

And, he feels this is in the Treasury's best interest as well. In a 111-slide presentation, Ackman makes the case that the Treasury stands to make more than $600 billion from its current preferred stock holdings by reforming Fannie and Freddie.

It might make sense, but it's still a real gamble
Ackman's logic is actually pretty solid, but it's still a big "what if" at this point. A lot of things need to happen in the shareholders' favor before they'll ever see a dime, and in a best-case scenario, any profit-sharing is likely to be several years away.

Still, with shares trading at just $2 or so, and a "potential" value of $23-47 per share according to Ackman's analysis, the risk/reward here might make sense. Just realize that at this stage of the game that buying shares of Fannie and Freddie is not much different than buying a lottery ticket, even if the odds are slightly in your favor. Chances are very good that shareholders will eventually get wiped out completely, so know what you're getting yourself into.