2014 has been a solid year for the stock market overall, with major market benchmarks sitting at record levels. But Cliffs Natural Resources (NYSE:CLF) has found itself among the absolute worst performers in the market, with its stock down 75% on the year. The producer of iron ore and metallurgical coal is suffering from one of the poorest environments in the natural-resources industry in decades, and recent moves have made even longtime shareholders question whether Cliffs can survive the shakeout in the industry. Yet there are a couple reasons to believe that Cliffs might have successfully positioned itself for a rebound in 2015. Let's take a closer look at what happened to Cliffs in 2014 and how the future could turn brighter for the company in the coming year. 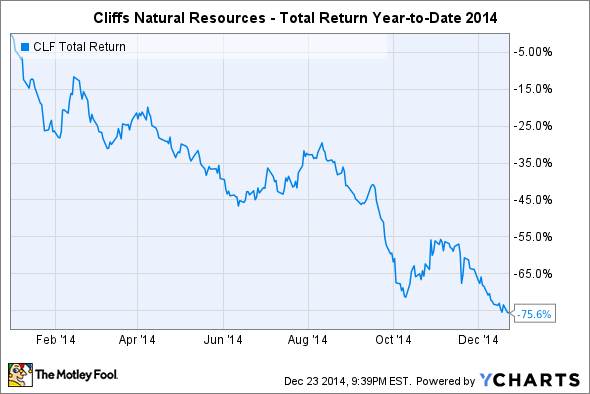 What made 2014 a horrible year for Cliffs Natural Resources
Cliffs Natural Resources has dealt with disappointment all year long in 2014. Iron ore has been under pressure for much of the year, with Cliffs' competitors in Australia having boosted production of iron ore after prices rose in 2013. At the same time, the customers in China and elsewhere that buy iron ore from Cliffs have reduced their demand, and that has boded ill for the future of iron ore prices in the near-term. A harsh winter hurt Cliffs' earnings in the first part of the year, and plunging revenue later in the year held back Cliffs despite an improving U.S. economy.

At the same time, Cliffs had to handle the distraction of an activist shareholder that lobbied hard for fundamental change at the company. Casablanca Capital argued that Cliffs needed to break the company into two parts, putting its domestic assets into one entity and transforming it into a master limited partnership while spinning off its international assets, including its Bloom Lake project in eastern Canada, into a separate public company. The dispute turned into a full-blown proxy battle, with Casablanca nominating its own slate of potential directors on Cliffs' board and naming candidate Lourenco Goncalves to take over as CEO. Casablanca won its fight in late July, winning six seats on Cliffs' board and allowing Goncalves to take over as chairman and CEO in early August.

By the end of the year, conditions had gotten so bad that Cliffs had to make more dramatic strategic moves. In November, Cliffs decided to shut down its Bloom Lake mine, voluntarily taking on $650 million to $700 million in closure costs in order to avoid spending potentially more money trying to continue operating the project.

2 possible ways that Cliffs Natural Resources can recover
Cliffs has a couple of opportunities to bounce back in 2015. First, the new strategies that Cliffs is using to try to reduce its costs in an all-out effort to buy itself more time could help the company remain operational as the industry seeks a new supply and demand equilibrium. Cliffs now believes that it will be able to cut its iron-ore cash costs for its U.S. iron-ore segment by $5 per ton to a range of between $50 and $55. Moreover, with $20 million of savings from reducing overhead expenses for the fiscal year, Cliffs is aiming to reduce its cash needs as much as possible so as to avoid what would inevitably be a dilutive offering to raise capital in the stock market.

Second, Cliffs believes that it can take advantage of its strong position in serving customers in North America. With its core assets in the U.S. Midwest, Cliffs is aiming to retain and capture as much of the market for raw materials for steel-making from the steel mills that have benefited from the rise in demand for automobiles, oilfield supplies, and other American-made products. If Cliffs can use its geographical advantage to stem the tide of low global iron-ore prices, then the company could be able to carve out a successful niche even if the global industry doesn't bounce back as quickly as investors hope.

Cliffs is still a long shot for speculative investors, even after the moves the company has made to try to rescue itself from its long slump. Yet if Cliffs can give itself enough maneuvering room to survive the shakeout in iron ore and metallurgical coal, it might be able to make it through to the next cyclical upturn in the industry and reward those investors who were patient enough to stick with Cliffs through the bad times.