RF Micro Devices (NASDAQ: RFMD) and TriQuint Semiconductor (NASDAQ:TQNT.DL) are merging into a new company, called Qorvo, with the deal set to close on Dec. 31. This year has been a great one for RF Micro, with the stock price soaring on the back of rising revenue and profits, and the merger promises both synergies and advantages from increased scale.

RF Micro Devices shareholders will receive one share of Qorvo for each RFMD share they own while TriQuint shareholders will receive 1.675 shares of Qorvo for each TriQuint share they own. At the closing of the transaction, the Company will execute a one-for-four reverse stock split. Trading in the new combined company is expected to start on the NASDAQ Global Select Market on Jan. 2, under the ticker QRVO.

Will owning shares of Qorvo be a good deal for RF Micro Devices shareholders? 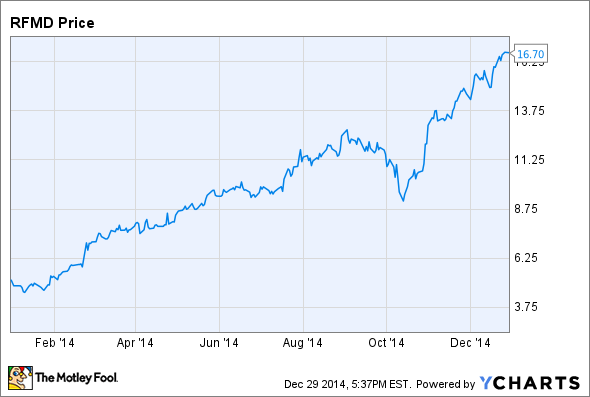 The story sounds great
RF Micro and TriQuint recently gave a presentation about the benefits of the merger and the opportunity going forward for the combined company, and the story sounds pretty enticing. The $10 billion RF market is growing by 10%-15% annually, mobile Internet traffic is exploding, and the complexity of RF components is rising rapidly. The transition to 4G is in the early innings, and the total value of the RF components in a global LTE device is dramatically higher compared to devices with older technologies.

It seems like the growth opportunities for Qorvo will be plentiful. Not only is the number of mobile devices rising worldwide, but the RF market is shifting toward more advanced, higher-value components.

But there's a problem
Here's a chart showing the number of mobile subscriptions broken down by the generation of RF technology: 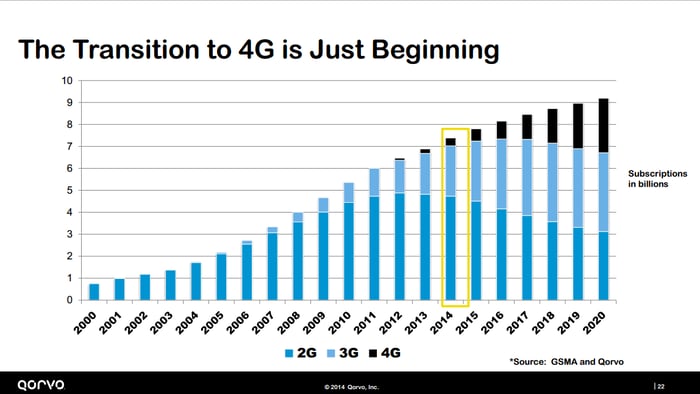 The number of 4G devices is set to explode during the next few years, and Qorvo should presumably benefit. But the transition to 3G, which started in 2005 or so, didn't really benefit RF Micro at all. Profitability has been erratic, with some years showing losses. This is despite the constant growth in the number of devices being shipped each year, and the constant shift toward more advanced technology.

Why is the shift to 4G any different? If 3G didn't lead to sustainable profitability, why will 4G? Historically, the shift to more advanced technologies has done exactly nothing to improve RF Micro's profitability. The company's operating margin in the past 12 months is roughly the same as it was in fiscal 2007, and revenue is only about 20% higher. This is despite the fact that the smartphone market was barely a market at all in 2007, and has now grown to over 1 billion units annually. If the shift from dumb phones to smartphones hasn't helped profitability, it's hard to imagine 4G making any real difference.

Is it time to buy RF Micro?
RF Micro, or Qorvo once the merger is complete, needs to show that its newfound profitability over the past few quarters is sustainable. Over the past decade, despite the explosion of smartphones and the shift to 3G, RF Micro hasn't been able to remain profitable for more than three years at a time.

The diversification and scale gained by the merger will certainly be good for the combined company, but there's a lot of uncertainty around the sustainability of RF Micro's strong performance in 2014. The stock trades at 45 times TTM earnings, although analysts are expecting rapid earnings growth going forward. The stock has more than tripled in 2014, and the current stock price bakes in a lot of optimism. But the record of the company doesn't seem to justify it.