Matt Frankel: One type of stock you definitely want to avoid in retirement is any "high-beta" stock, especially those in young industries. My favorite example is First Solar (NASDAQ:FSLR).

A "beta" is a measurement of how reactive a stock is to market movements and can be found as part of most stock quotes. A beta of less than 1 means the stock is less reactive than the S&P 500. For example, a stock with a beta of 0.5 could be expected to rise 5% when the overall market rises 10%. On the other hand, a beta above 1 implies a very volatile stock.

The problem with high-beta stocks is that they tend to get crushed when the market does poorly. Just take a look at how two low-beta stocks -- Procter & Gamble and Colgate-Palmolive -- performed during the 2008 crash as opposed to First Solar, which has a beta of 1.9. 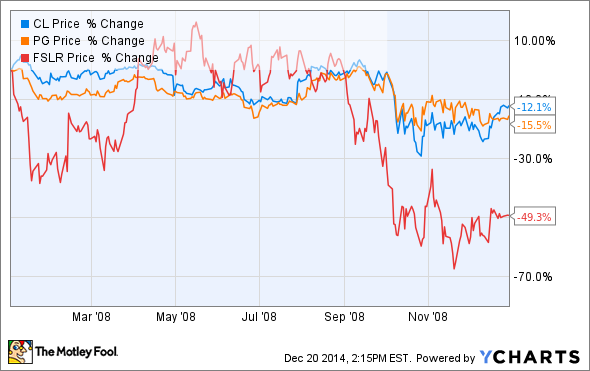 Plus, the solar industry is relatively young and uncertain, and solar stocks are still very speculative investments. I like First Solar as a company very much, and think it has the potential to do very well in the years to come. However, retirees don't need to take chances with their money, or chase high-growth stocks. They need consistency and stability, and high-beta stocks like First Solar offer neither.

LeoSun: At first glance, McDonald's (NYSE:MCD) seems like an ideal retirement stock. It's a dividend aristocrat that has boosted its dividend annually since 1988 and has a forward annual dividend yield of 3.8%.

But many investors forget that McDonald's rallied nearly 180% over the past 10 years, and then completely stalled out since 2012, when former CEO Jim Skinner -- the man who led the company since 2004 -- stepped down. Skinner's main strategy, which focused on improving existing locations instead of aggressively expanding, boosted McDonald's annual franchised sales from $37.1 billion in 2004 to $69.7 billion in 2012.

Skinner's successor, Don Thompson, has struggled with declining sales. In North America and other mature markets, McDonald's has struggled with high commodity costs, demands for higher wages, and a market preference for bistro-like quick-serve restaurants such as Chipotle.

McDonald's comparable store sales have fallen for four consecutive quarters in the U.S., and the company is on track to post its first year of negative global comparable sales since 2002. McDonald's has scrambled to compete with higher-end eateries with "build your own burger" stations, but it's unclear if this move can get sales back on track. Therefore, McDonald's could give up some of its massive gains from the past decade -- which definitely isn't what retirees want in their retirement portfolio.

Todd Campbell: There are thousands of stocks that retirees have to chose from, and most of them are speculative and have little place in retirement portfolios. But retirees should avoid even some profitable, well-established companies with billion-dollar top lines, including retailer Abercrombie & Fitch (NYSE:ANF).

Despite Abercrombie's youth appeal and my general inclination to own companies in retirement accounts that are easy to understand, this teen retailer is far too fickle. Teen retail is notoriously hit-and-miss, and few trends change more quickly than teen clothing. As a result, shares in Abercrombie and its peers, including American Eagle Outfitters, can trade sharply higher or lower in any given year depending on whether they need to mark down their inventory. Even when taking account of the fact that Abercrombie's shares are yielding 2.8%, that kind of volatility isn't deserving of a slot in retirement portfolios. Instead, retirees interested in owning retailers might be better served by buying the S&P Retail ETF. That won't give you a big yield -- it's only 0.72% currently -- but it will give you exposure to 100 different retailers, which may mean it's a less risky bet.