Anyone who is a shareholder in Hercules Offshore (NASDAQ:HERO.DL) has probably been in a pretty bad mood lately. This year has been absolutely dismal for the company stock-wise, as shares have plummeted more than 84%. During the company's most recent earnings presentation, management announced that it was planning on retiring -- or "cold-stacking" in industry lingo -- four of its rigs in order to cut costs and hopefully help the company return to profitability.

I don't want to pile onto the misery of Hercules' investors any more, but I have bad news for you: This isn't going to stop the bleeding. Let's take a look at what's going on in the rig market today, and why this move probably won't be enough to keep the company competitive. 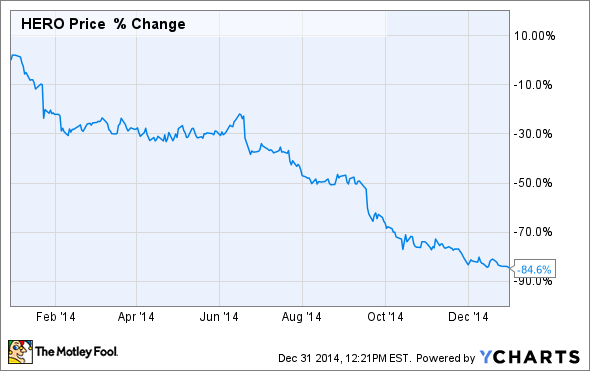 Not exactly aging gracefully
The first thing to know when looking at the future of Hercules Offshore is to look at what's going on in the market for offshore rigs, and what's expected to happen in the next several years. In these past few years, we have seen a massive expansion of rig fleets from other companies. During this time, demand has remained very strong, but there are still several rigs that have not yet hit the market.

According to Andrew Cosgrove and William Foiles over at Bloomberg, more than 100 new jack-up rigs will hit the open market and compete with Hercules between now and the fourth quarter of 2016. Also, many of the largest clients to rent these rigs -- integrated oil and gas companies -- have said that they will wind down capital spending for a few years as many of their major new projects come online.

What this means is that the demand for rigs might start to wane, and companies will get the pick of the litter when it comes to handing out contracts. Not only does this mean that they will probably negotiate lower prices, but they will also demand newer rigs that are capable of handling harsh environments and deep-drilling capabilities. Unfortunately for Hercules, it has a very short supply of these types of rigs.

Of the 25 or so rigs that the company is actively marketing, only three of them are considered newer rigs, and two are under construction with expected deliveries in 2015-2016. The rest of the fleet, though, is very old.

Even with these new rigs included, the average age of the entire fleet is more than 30 years. To make matters worse, there aren't any in-between rigs in the fleet. Either they are appraoching the end of their economic life, or they are brand new. 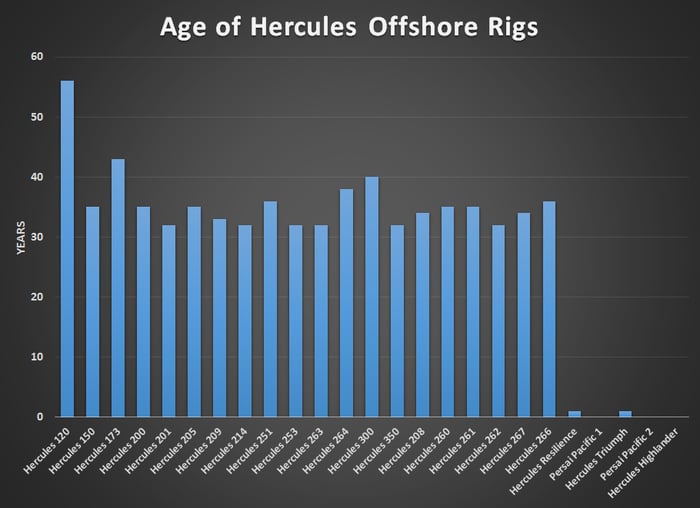 While I can't say for certain that these rigs will not be able to get contracts in the future, the fact that most of them are so old makes it less likely to get a contract. If they do, they will be for diminishing day rates. Cold stacking those four rigs may just be a prelude to a large retirement of Hercules rigs as these new ones enter the market.

Not really in a financial position to improve
A lot of the issues going on with Hercules could be forgiven if it could start to mount a comeback with a well-timed newbuild program; but another issue that the company needs to deal with is the fact that it isn't in any real financial position to make the necessary capital expenditures to make up for this aging fleet. Forget for a second that the company hasn't recorded positive net income since 2007; the last time Hercules brought in more cash from continuing operations than what it spent on fleet improvements was in 2010.

So, to cover those cash shortfalls, the company has tapped the debt market... hard. But even that option is starting to look tapped out. With a debt-to-capital ratio of greater than 60%, and an EBITDA-to-interest expense ratio of 3.44 -- not necessarily a sign of a company in death throes, but well below the industry average of 14 times -- the company has junk bond status with coupon rates as high as 10%. This kind of financial position will be a tough hole to dig out of before it can hopefully expand its fleet and return to profitability.

More hard times ahead
I can imagine that there is an investor or two out there who thinks that, at today's price, there's a chance to make a profit with Hercules Offshore. The company currently trades at about 20% of its tangible book value, and perhaps someone could argue that the value of its five new rigs is worth more than what shares are valued at today.

The one thing to consider with that argument, though, is that relying on just those five rigs would likely not bring in enough to cover interest payments, and it will probably be hard to find buyers for 30- and 40-year-old drilling rigs. Overall, the outlook for Hercules still looks very rough, and the current outlook for the industry doesn't give any indication that it will get easier for the company any time soon.