No company is better positioned to profit from this emerging trend than Enterprise Products Partners.

It wasn't all that long ago that the United States was worried about running out of energy. That's why much of the country's energy infrastructure was built around importing energy. However, the shale revolution is changing America's energy future into an export story with the U.S. Commerce Department giving energy companies the go ahead to begin exporting ultra-light oil known as condensate. This is a big opportunity for the oil industry as it will allow producers to earn a bit more money on this oil. For investors looking for the way to profit from these export there is one company that is quietly best positioned and that company is Enterprise Products Partners (EPD 0.70%).

The simple economics of supply and demand
The U.S. has enjoyed remarkable growth in the supply of energy commodities over the past few years. That growth isn't expected to taper off anytime soon, as we see in the following slide. 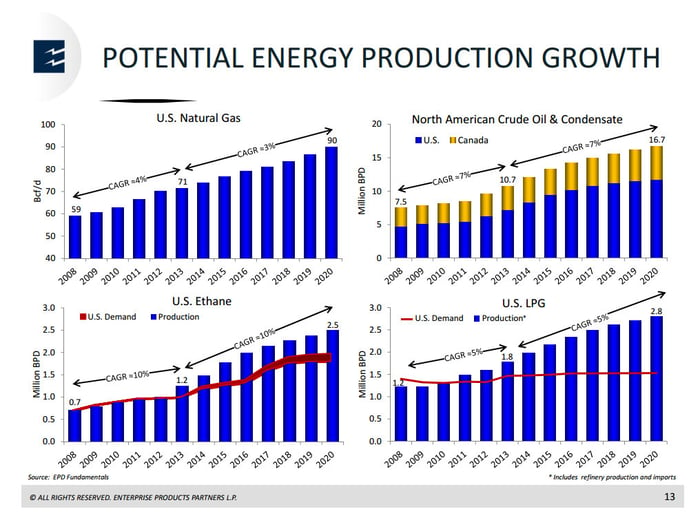 The growth rate of energy sources is expected to remain rather consistent. However, the demand side of the equation, especially for natural gas liquids such as propane and ethane, is not expected to keep up.

Enterprise Products Partners saw this trend coming early on and has quietly built the energy export infrastructure so that it could profit from shipments of such materials abroad. Because of this, the company nearly single-handedly turned North America into the world's leading exporter of propane, as shown in the following chart. 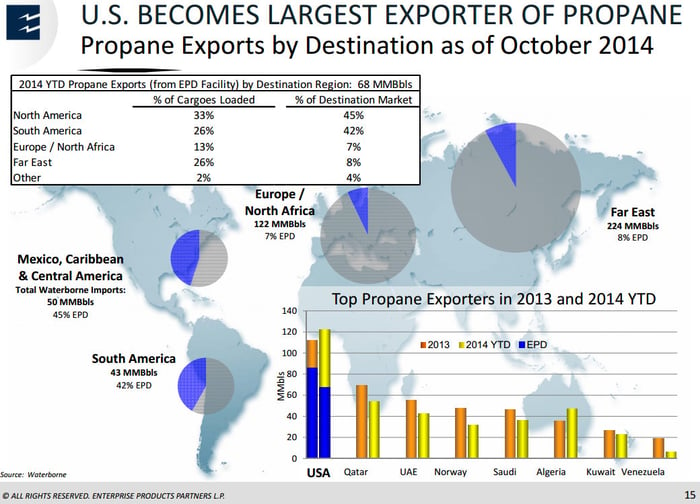 But wait, there's more
Enterprise Products Partners is not just going to export America's excess propane. The company has already announced that it will build an ethane export facility along the Gulf Coast, which should begin operations by the middle of 2016. The company is already thinking about expanding the facility given the outlook for cheap American ethane supplies against strong foreign demand.

However, the other big story, and the one few notice, is how Enterprise Products Partners is strategically preparing itself for crude oil exports. The company is focused on adding capacity to export refined petroleum products such as gasoline and diesel. However, it has taken steps toward oil exports: Earlier this year, it was given permission to export a minimally refined ultra-light oil known as condensate. As a first mover in exporting this product, the company positioned itself to move into exporting unrefined crude oil when the United States ends its oil export ban on other varieties of crude oil.

As the following slide shows, the company has exceptional export capacity along the Gulf Coast to capture this opportunity. 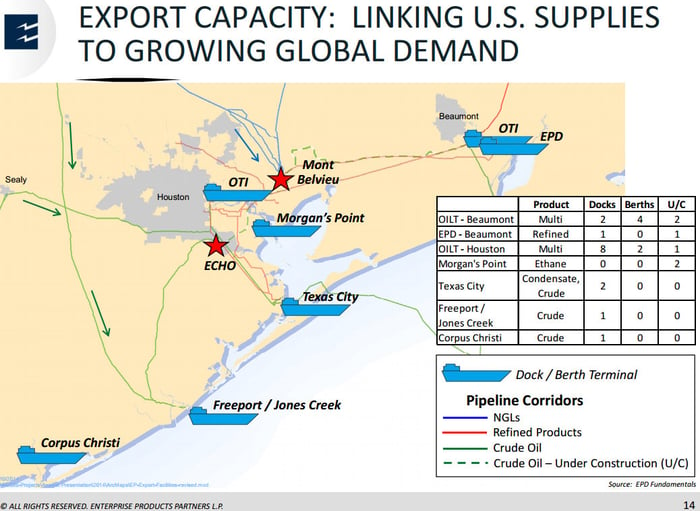 This capacity will enable the company to adapt as the market develops as it can offer producers access to its docks, which are already set up to export petroleum products. This is why investors can almost bank on Enterprise Products Partners leading the way in shipping oil once the export ban is dropped -- a future that is growing more likely by the day after the U.S. made it easier to export condensates. There is growing certainty that a export ban will be dropped before the end of 2015 as U.S. oil producers have made ending the federal prohibition the top priority in the new year.

Investor takeaway
Enterprise Products Partners is becoming an energy export story, but no one seems to be talking about it. Not only is the company a leader in exporting propane, but it is leading the way to export other energy commodities, including ethane and condensate. However, the real story here is that the company has set itself up to profit by being the early leader when crude oil starts flowing out of the U.S. on export tankers, which is a theme that could make investors a lot of money in the years ahead.

Matt DiLallo owns shares of Enterprise Products Partners. The Motley Fool recommends Enterprise Products Partners. Try any of our Foolish newsletter services free for 30 days. We Fools may not all hold the same opinions, but we all believe that considering a diverse range of insights makes us better investors. The Motley Fool has a disclosure policy.