Despite the market's gains, not every industry did equally well.

Healthcare stocks were among the top performers in 2014. Source: StockMonkeys.com, Flickr

2014 is over and done with, and investors are already looking forward to what 2015 will bring as the stock market aims for what could be its seventh straight year of gains. In a quiet postholiday market session, investors seem like they're still on vacation, with the Dow Jones Industrials (^DJI -0.26%) quietly trading down 15 points as of noon EST. Yet despite 2014's solid performance from the stock market, a closer look at the year shows some definite winners and losers among stocks, and forward-looking investors seek to use those figures to find ways to boost their performance in 2015. 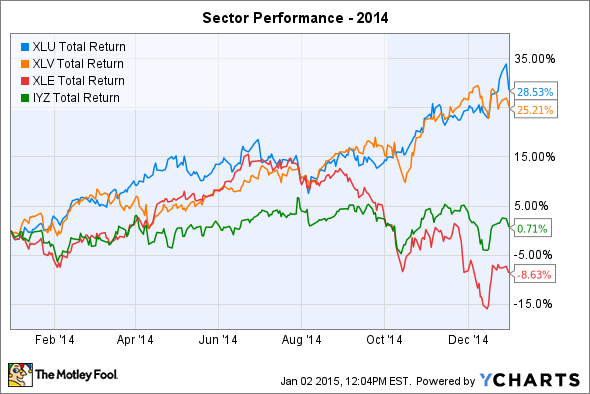 A big year for utilities and health care
The best performing sector in the market is ironically one that's not represented in the Dow Jones Industrials at all. The utility sector topped all of its peers in 2014, with the Utilities Select SPDR ETF (XLU 0.11%) producing a return of better than 28% last year. The big push for utility stocks came from interest rates, which unexpectedly dove in 2014 as the Federal Reserve's end of quantitative easing didn't have the rate-raising impact that most investors had believed it would. As a recovering economy helped keep demand up, falling fuel costs helped utilities reduce their overall expenses and removed some of the pressure on margins that previous rises in energy prices brought. Unfortunately, many of those favorable trends appear likely to reverse in 2015, which could hurt performance for utility stocks this year.

Healthcare stocks, on the other hand, owe the 25% return of the Healthcare Select SPDR (XLV -0.84%) to a much different phenomenon. Small pharmaceutical and biotech stocks were the most prevalent on lists of the market's top performing stocks in 2014, as a combination of promising trial results, speculative trading activity, and numerous mergers, acquisitions, and strategic partnerships helped send interest in the sector sky-high. Some investors argue that massive share-price increases in 2014 mean that even future successes won't produce strong returns for shareholders buying in at today's prices, but the demand among top pharmaceutical companies for promising drug candidates to add to their pipelines shows few signs of slowing anytime soon, and that could bode well for the sector in the coming year.

Energy and telecom fall short
It's no surprise that the energy sector was the worst performer in 2014, with the Energy Select SPDR (XLE 2.65%) falling almost 9% even after considering the rich dividends many stocks in the industry pay. Oil prices declined by nearly half last year, and the consequences have rippled across the sector, hurting not only the exploration and production companies that find and sell oil and gas but also the services and transportation companies that rely on those E&P companies' success to drive their business. With reports of producers asking suppliers for price breaks to help them remain financially viable as energy prices have fallen, the modest decline in energy stocks could well be just the beginning of a longer trend that will include dramatic revenue declines for most companies throughout 2015.

Meanwhile, telecom stocks also lagged, with the iShares DJ U.S. Telecom ETF (IYZ 0.38%) gaining less than 1% on a total-return basis. Major players in the industry have benefited from the wireless revolution, but a price war among top U.S. carriers pointed to the potential for lower profits ahead, and that brought back memories of previous competitive battles in areas like long-distance telephone service that led to severe downturns for the industry. Dividend income helped telecoms maintain positive returns, but price-based competition could persist in 2015 and put further pressure on profit margins.

In 2015, investors need to look beyond the Dow and other major-market averages to see the trends underlying individual sectors. By knowing what's happening to each industry, you'll do a better job of steering clear of potential losses and honing in on the best opportunities.