Please ensure Javascript is enabled for purposes of website accessibility
Log In Help Join The Motley Fool
Free Article Join Over 1 Million Premium Members And Get More In-Depth Stock Guidance and Research
By Jordan Wathen - Jan 5, 2015 at 6:07AM

Do larger business development companies have an advantage on smaller BDCs? Let's look at how scale can impact an important line-item -- expenses.

Economies of scale can be a source of a massive competitive advantage. Think Costco (COST -0.48%), which has more buying power per product than any retailer on Earth. Similarly, GEICO uses its second-largest position in car insurance to spread risk and dilute its fixed costs.

Today I'll consider scale as it relates to fast-growing business development companies, which make their money lending to private companies. Many of the industry's players cite scale as an advantage to their rapid balance sheet growth, but the benefits might not be as clear as they appear.

Where scale helps
Let's start by identifying sources of potential economies of scale. I can think of a handful of areas where size might create an advantage for BDCs:

Looking at the cost side of the equation
The biggest costs for a BDC can't be ground away with size alone. For externally managed BDCs, the top expenses are management and incentive fees paid to the external advisor. Scale does nothing here, since fees are assessed as a percentage of assets and earnings -- fees grow directly with the balance sheet.

Other costs, however, could be reduced with scale -- legal fees, valuation services, audit and tax, and general overhead expenses shouldn't necessarily grow in tandem with growth in a company's balance sheet.

Wall Street analysts have often pointed to BDCs achieving scale with a balance sheet in the $1 billion to $1.5 billion range. With that in mind, I went back through financial filings for some of the largest BDCs and calculated their expenses, excluding interest and management fees, and then divided the sum of these expenses by balance sheet assets.

When comparing year-end assets to full-year expenses, extra costs such as legal, audit, and general and administrative expenses effectively clustered around 0.5%-0.6% of assets in every year for three of the largest BDCs. Of course, costs weren't without their ups and downs, but a truly meaningful change in expenses as a percentage of assets isn't clear.

The reason, of course, is that these BDCs had largely achieved "scale" well before three years ago. Going back even further, I find that costs started to really break at $1 billion to $1.5 billion in assets for each BDC listed in the above table.

Fifth Street Finance provides an excellent example of this phenomenon since, unlike Ares or Prospect Capital, it didn't have merger-related expenses from the acquisition of a rival during the relevant periods. 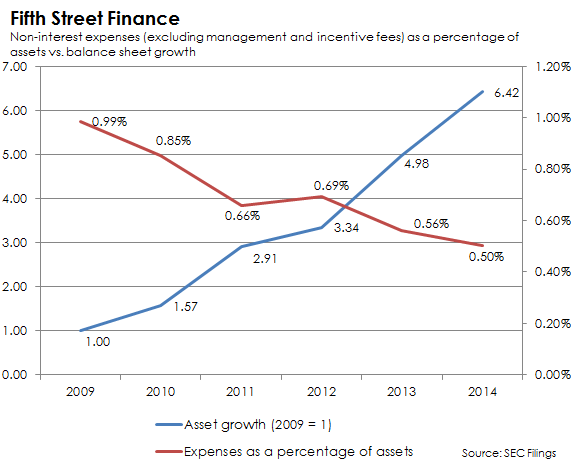 Fifth Street Finance broke $1 billion in assets during its 2011 fiscal year, a year with robust improvement in nonmanagement or incentive fee expenses as a percentage of assets.

A fast-growing new entrant, Medley Capital (MCC 1.44%), provides a more recent testing ground for a generally accepted reality that costs tend to start getting scaled out in the range of $1 billion to $1.5 billion in assets.

Noninterest, nonmanagement fee expenses have come down dramatically in the previous three years, from 1.1% of total assets to 0.62% as of the company's latest annual report. During that time, Medley's balance sheet tripled in size, from $416 million to $1.32 billion.

Medley Capital is roughly as efficient as Fifth Street Finance was at its size, and they are fairly comparable, as neither company had any significant one-time expenses, such as mergers or acquisitions of rivals, during their histories.

A final word on the advantages of size
Balance sheet size can clearly help chisel away some of the fixed costs of keeping a BDCs doors open, but only to a point. Beyond $1 billion in assets, the rate of change in expenses as a percentage of assets slows.

It's also important to recognize that scale has no impact on the largest cost -- management and incentive fees -- for externally managed BDCs. I think that will change over time, however, as the chase for equity capital becomes more competitive.

If there's an important takeaway here, it's this: growth has little impact on costs for the largest BDCs. For the smallest, it can offer some cost savings as fixed costs are whittled down. All else being equal, though, the management fee line remains the single largest opportunity to improve shareholder results.

These 2 High-Yield Dividend Stocks Could Slash Their Payouts

Prospect Capital: 4 Things to Watch When It Reports Earnings