Networking giant Cisco Systems (NASDAQ:CSCO) spent much of the 2000s growing at a double-digit pace. From 2005 through 2011, Cisco nearly doubled its revenue as it cemented its status as the dominant network hardware provider. But the past few years have been tougher, with revenue growth slowing and margins declining. 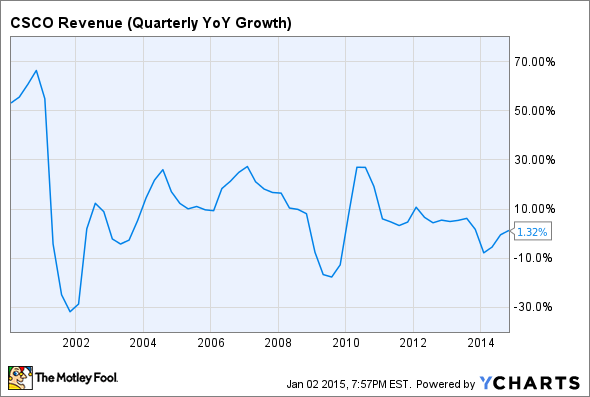 In the most recently reported quarter, revenue grew just 1% year over year as both weakness in emerging markets and sales declines to service providers like Verizon bogged down the company. There's at least one Cisco executive, Chuck Robbins, VP of worldwide field operations, however, who believes that Cisco can return to double-digit growth. Robbins, in a recent interview with CNBC, argued that the numbers are in Cisco's favor, although he also said that the company still has a long way to go. Is it possible that the slow-growing Cisco can become an explosive growth company once again?

While the largest parts of Cisco's business, switching and routing, are currently trudging along, there are areas where Cisco is rapidly growing. Cisco's data-center business, which includes its UCS servers, grew by 15% year over year last quarter, contributing nearly $700 million of revenue, good for 5.7% of the total revenue. In just five years, Cisco has gone from a bit player in the x86 blade server market to the market leader in North America, and it's one of the few server vendors posting any growth at all.

Another area of rapid growth for Cisco has been security, and with all of the high-profile breaches and hacks during 2014, the cybersecurity market is one of the largest opportunities for Cisco going forward. Cisco's security business grew by 25% during the latest quarter, accounting for 3.7% of the total revenue. In 2013, Cisco acquired cybersecurity firm Sourcefire, and as of November 2014, all of Sourcefire's products had been fully integrated into Cisco's security business.

Both data center and security are big opportunities for Cisco, but they remain a small part of the overall business. For Cisco to return to rapid growth, its core businesses need to do the heavy lifting.

Temporary weakness and long-term threats
Switches and routers form the backbone of the Internet, and Cisco dominates both categories. Cisco has been having trouble in emerging markets for a few quarters now, particularly in Asia, and revenue from this region declined by 12% year over year in the latest quarter.

The NSA scandal of last year is partly to blame for this weakness. In June, it was reported that the NSA was intercepting some networking equipment bound for international markets and installing surveillance equipment. Cisco CEO John Chambers penned a letter to President Obama in response stating that these issues were hurting American technology companies overseas. How long it takes Cisco to regain the trust of its international customers remains to be seen.

Part of Robbins' argument for Cisco returning to double-digit growth relies on sales eventually recovering in these emerging markets, as well as service providers building faster networks, increasing capital spending in the process. Sales to service providers fell by 10% during the latest quarter, while sales to other customer segments, like the public sector, which grew by 13%, were far stronger.

Eventually, wireless service providers will need to build faster networks, and if those companies continue to use Cisco's products, service provider sales should recover. 5G wireless networks, the next step beyond 4G LTE, is expected by industry experts to be deployed by 2020. Cisco may be in for a few more years of weakness on this front, but the potential for a rebound is certainly there.

If both emerging market sales and service provider sales recover, Cisco's growth would certainly get a big boost. Combine that with rapid growth in Cisco's other businesses, and it's absolutely possible that the company can grow revenue in excess of 10% per year, once again. But this kind of growth also requires that Cisco remain the market leader in switching and routing, and the threat of competition from software-defined networking, or SDN, could throw a wrench in Cisco's growth ambitions.

The idea behind SDN is simple: Instead of using expensive, proprietary hardware like Cisco provides, use cheap commodity hardware combined with software because it can do the same job for less. There's been a lot more talk about SDN in recent years than action, as it's a young technology, and it's still unclear exactly how big of a threat it is to Cisco's core business.

One analyst from Forrester thinks that SDN is being overhyped, and I tend to agree. He argues that SDN has its place in industry-specific situations, but for general infrastructure purposes, solutions like those offered by Cisco will likely make more sense. If this ends up being the case, especially as the number of devices connected to the Internet explodes going forward, Cisco will be in very good shape.

While there's always the threat of disruption in the technology sector, Cisco has the potential to return to the days of double-digit growth in the coming years. It will require a recovery in emerging markets and sales to service providers, as well as continued growth in Cisco's smaller product categories, but all of these seem plausible. With Cisco trading at a cash-adjusted P/E ratio of about 14.5, it's definitely a stock to consider.