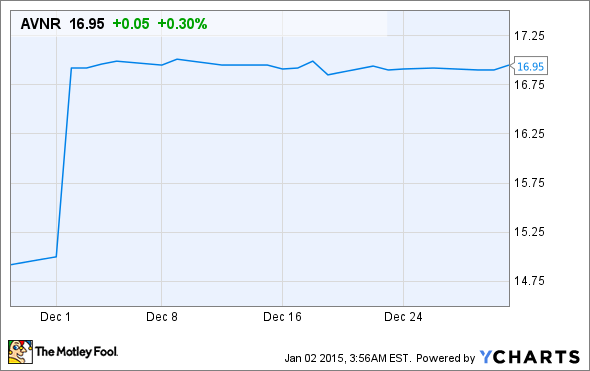 What: Shares of Avanir Pharmaceuticals (NASDAQ: AVNR), a biopharmaceutical company focused on developing therapies to treat central nervous system disorders, leaped 14% higher in December, according to data from S&P Capital IQ, after agreeing to be purchased by Otsuka Pharmaceuticals.

So what: Under the terms of the deal, which was announced early in the month, Otsuka will pay $17 in cash per share for Avanir Pharmaceuticals. The deal is expected to close sometime during the first quarter of 2015.

The impetus for the purchase on Otsuka's part was twofold. First, it gives Otsuka instant access to pseudobulbar affect drug Nuedexta which has a sales run rate of a tad more than $100 million per year. Peak annual sales estimates for the drug are projected to be near $300 million per year. More importantly, Otsuka gains access to promising Alzheimer's drug candidate AVP-923, which is specifically targeted at reducing Alzheimer's-related agitation. In September, AVP-923 met its primary endpoint of reducing the agitation/aggression domain score of the neuropsychiatric inventory in a midstage study, while also trending positively in a handful of secondary endpoints. Since Alzheimer's is such a tough-to-treat disease, any successful midstage studies are bound to turn heads.

Now what: Avanir shareholders should feel pretty good about the premium they're getting from Otsuka considering how many other Alzheimer's drugs have failed in late-stage studies. If AVP-923 doesn't pan out as expected then Nuedexta and AVP-825, an inhaled migraine medication that was rejected by the Food and Drug Administration in November but can potentially resolve its issues and be resubmitted, aren't going to be enough to justify the price Otsuka paid for Avanir.

At this point in the game, Avanir is trading within pennies of its buyout price, so any sort of arbitrage opportunity has long since passed. If you're still holding your shares I believe there's no reason to not consider cashing out your chips and beginning the search for your next winning investment.