Please ensure Javascript is enabled for purposes of website accessibility
Log In Help Join The Motley Fool
Free Article Join Over 1 Million Premium Members And Get More In-Depth Stock Guidance and Research
By Sean Williams - Jan 7, 2015 at 10:03AM

Sequenom decodes its way to big gains in December after settling a long-standing dispute with a larger rival. See what this could mean for investors over the long run. 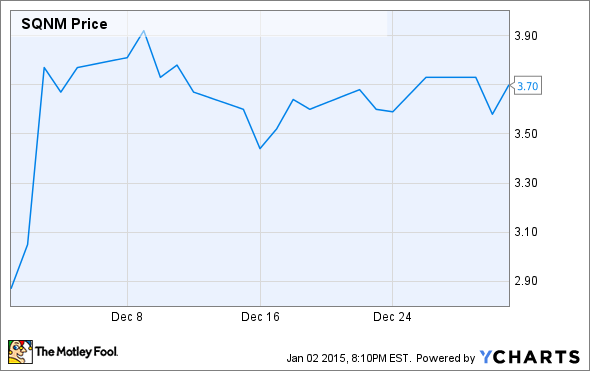 What: Shares of Sequenom (NASDAQ: SQNM), a life sciences company focused on developing genomic and genetic analysis solutions and diagnostics, soared by 23% in December, based on data from S&P Capital IQ, after settling a long-standing legal dispute with a rival.

So what: As announced in early December, Sequenom and Illumina (ILMN -3.67%) ended their long-standing dispute over the use of intellectual property related to the development of noninvasive prenatal diagnostic tests, or NIPTs.

The forged agreement essentially allows Illumina exclusive global rights to used pooled intellectual property to develop its own NIPTs and to license this pooled intellectual property to third-party laboratories who wish to develop their own NIPTs. In return, both companies agreed to share revenue generated from the patent pool, with Illumina also making an upfront $50 million payment to Sequenom and paying Sequenom a royalty on sales of its in-vitro diagnostic kits for NIPT through 2020.

Now what: A reconciliation on this intellectual property dispute was critical for Sequenom for two reasons. For starters, it keeps both companies from a long and drawn-out legal battle which Sequenom was ill-prepared to fight. Also, it provides an immediate cash infusion of $50 million for Sequenom, which is exactly what it needs to get skeptics off its back while it's losing money. With immediate funding no longer a concern, Sequenom can instead to turn its focus toward boosting sales of its prenatal test franchise. There's obviously plenty of market potential for Sequenom in the prenatal diagnostic market, and sales of its products have grown steadily this decade. Unfortunately, the reimbursement environment, especially as it relates to government-sponsored Medicaid, is still a large unknown. If reimbursement rates on Sequenom's prenatal tests aren't favorable, it could price many families out of the market. As the Affordable Care Act evolves and the Centers for Medicare and Medicaid Service looks to pare back businesses' reliance on government-sponsored care, it's possible that diagnostic developers like Sequenom could see wild volatility in their top- and bottom-lines.

Despite the worries, I remain intrigued by Sequenom's diagnostic tests. I believe personalized genetic testing has a solid foundation to stand on over the long run, but I wouldn't be too keen on chasing the stock until it's safely profitable, which isn't likely to happen until 2016.

The Motley Fool recommends Illumina. Try any of our Foolish newsletter services free for 30 days. We Fools may not all hold the same opinions, but we all believe that considering a diverse range of insights makes us better investors. The Motley Fool has a disclosure policy.