Abercrombie & Fitch (NYSE:ANF) and American Eagle Outfitters (NYSE:AEO) have suffered unfashionable returns lately. These major teen retailers are trapped in a spiral of poor earnings, stagnant top-line sales, and gloomy forecasts. Yet the one thing each retailer has offered shareholders is a fat dividend; both Abercrombie (2.8%) and American Eagle (3.9%) offer an above average dividend yield.

And while dividend income can help ease the pain of a falling stock, the sustainability of these dividends should be called into question.

Stating the obvious
Its no secret that teen retail has been in the dumps lately. Abercrombie's earnings slumped 25% in its most recent quarter and same-store sales tanked 10%. While American Eagle actually saw third-quarter earnings rise on cost cuts, it suffered weaker traffic and a 5% drop in same-store sales, which followed Q2's 7% drop. Each stock has struggled in recent years, as less foot traffic has hit top-line revenue and crimped profits (below). 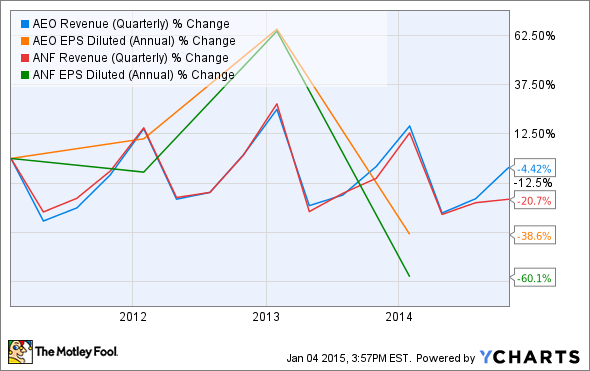 No dividend plan is safe if a business' sales and earnings continue to decline. So let's assume, hypothetically, that both Abercrombie and American Eagle can turn the tide and first evaluate their dividend safety in the near-term.

Ultimately, we're trying to answer one question: Can a business afford to pay a dividend, without issuing new debt, while still having enough cash to invest in its business? One tool to determine this is the CF to CAPEX ratio, which measures how many times a business' operational cash flow covers its current capital expenditures. The higher this number is, the better. As you can see below, both businesses have trended lower in recent years, even though they've slashed expenses to prop up EPS. 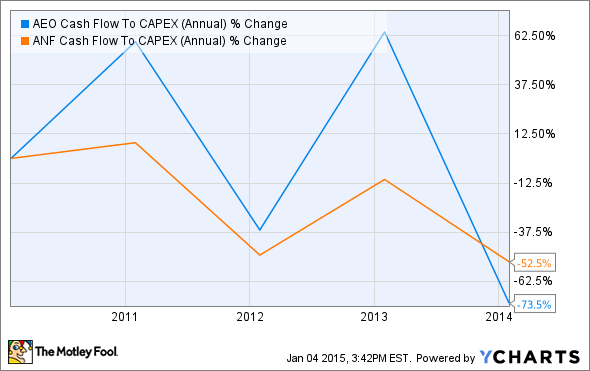 Another metric investors should look at is the payout ratio, or the percentage of earnings that are paid out in dividend. The average payout for S&P 500 dividend paying stocks is about 50%, and a safe investment should not have a payout over 60%. The low-end of Abercrombie's earnings guidance for this year is $1.50, meaning its current dividend payment of $0.80/share looks safe (by this metric). However, that guidance was recently slashed and store traffic seems to be deteriorating; another earnings miss or two could push this pay-out into dangerous territory.

American Eagle, on the other hand, is currently paying an annual dividend of $0.50 while projecting annual EPS to around $0.59/share. This means the current dividend is 85% of EPS, which is unsustainable.

At a crossroads
Both companies have slashed costs and closed stores to keep earnings afloat, but you can only "squeeze the lemon" so much. At this point they need a sales turnaround, yet they face two huge changes in teen fashion.

1. Individuality. According to a recent study by Piper Jaffray, today's teens favor "fast fashion," and individualism -- they want to stand-out, not fit-in. This has hurt Abercrombie and American Eagle. Both brands were built off of large "logo-print" which have fallen out of favor.

2. Both retailers are primarily mall-based and dependent on shopping mall traffic, which has waned in recent years. According to ShopperTrak, holiday season mall traffic has declined three years straight, down 28.2% in 2011, 16.3% in 2012, and 14.6% in 2013. As various digital platforms emerge, shopping malls are becoming less important for teens social life. It's very likely, therefore, that they will feel the brunt of this shopping mall slow down.

Both companies are still profitable and they seem to understand the problem. They've been trying to shutter poor performing stores, while abandoning their "logo-based" brand identity. Yet, if you take away their brand identity and mall presence, what is really left? At the end of the day, changing teen opinions have ravaged each business and trying to predict whether teens will "switch back" to these brands is pure speculation. If sales don't improve over the next year, I feel each business could cut its dividend.

Abercrombie and American Eagle want investors to believe that they can change they way the world views them. I, for one, believe a customer's first impression is a lasting one, and would advise investors to stay away.

Are These Two Major Retailers On The Verge Of Dividend Cuts? @themotleyfool #stocks $ANF $NKE $AEO Next Article
Current