Down one-third since last October, the stock could be attractive for investors that don't mind volatility. 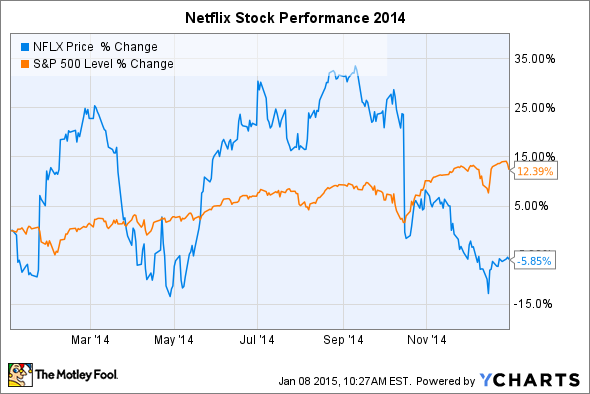 The good and the bad
The streaming video giant had been trouncing the market as late in the year as October. But that changed with Netflix's third quarter earnings release, in which management missed their subscriber target and for the first time projected a year-over-year slowdown in U.S. member growth for the fourth quarter. That's important because it suggests Netflix could be at a saturation point in its biggest market, having already booked its biggest subscriber gains.

And while international growth promises to dramatically expand Netflix's addressable market, profits from that business are still a long way off. In fact, CEO Reed Hastings and his team forecast a $100 million fourth-quarter loss internationally, the biggest hit in two years.

On the other hand, international member growth is robust, and the U.S. business is generating record earnings right now. In fact, last year's streaming price increase helped push the contribution margin to 29% in the third quarter, or almost triple the result from late 2011. 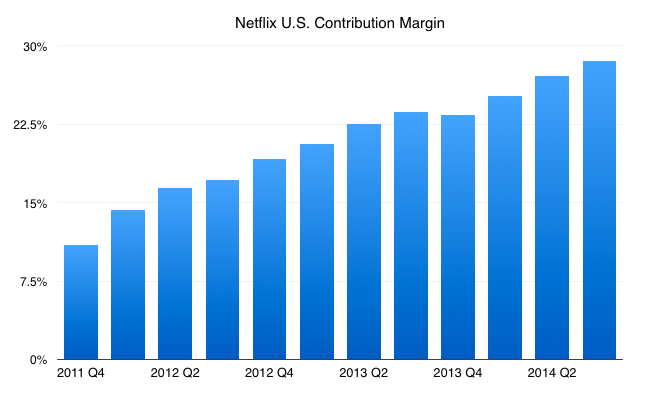 And while subscriber growth is lagging, the service's engagement and retention levels are at record highs. So it isn't competition like Amazon.com's Prime Instant Video or Hulu that's winning members away. Likewise, dissatisfaction with the content offering doesn't appear to be keeping people from signing up. Instead, Netflix might be growing at a slower rate simply because the service costs more now than it did a year ago. That's a fine trade-off for the company as long as it powers more membership gains down the line through increased investments in content and marketing.

So does that spell opportunity for investors? Shares are obviously cheaper: Netflix's price-to-earnings ratio has fallen from 600-plus in 2013 to roughly 90 now. And the stock is one third below its 52-week trading high of almost $500 per share.

However, at least some of that drop can be attributed to the risk heading into Netflix's fourth-quarter earnings results, which will be released on Jan. 20. Wall Street is expecting strong Q4 sales growth of 26% while earnings dip due to increased costs associated with the company's international expansion.

One number to watch
But the real focus will be on the domestic membership count and what it could mean for the future of the business. Management in October projected fourth-quarter subscriber growth of 1.85 million users. Yes, that would be almost double the gains from the prior quarter. But keep in mind that the fourth quarter is seasonally strong, pushed higher by the millions of new Internet capable devices that come online around the holidays. Compared to the same period last year, 1.85 million new fourth-quarter members would represent a disappointing 20% slowdown in growth.

That's why there's so much riding on the upcoming results. If Netflix manages to add around 2 million U.S. members, bringing its total to 40 million, then that would add weight to the company's goal of eventually reaching as many as 90 million subscribers, even if it takes a bit more time than investors had hoped.

Another member growth target miss, though, and Hastings might need to rethink his estimate of the long-term attractiveness of the U.S. market. That would also impact the company's international expansion choices, since those are funded mainly through U.S. profit growth.

That uncertainty points to a volatile time ahead for the stock, especially around the fourth-quarter earnings release. So whichever way investors lean on Netflix's long-term growth potential, they should expect 2015 to be at least as bumpy as last year was.