Please ensure Javascript is enabled for purposes of website accessibility
Log In Help Join The Motley Fool
Free Article Join Over 1 Million Premium Members And Get More In-Depth Stock Guidance and Research
By Matthew Frankel, CFP® - Jan 11, 2015 at 8:31AM

With many people expecting the Federal Reserve to start raising rates this year, here is one investment you may want to avoid

As investors get a little older, it's only natural for them to move some money out of the stock market and into fixed-income securities like bonds.

With bonds, the general rule is the longer the time until maturity, the higher the interest rate the bond will pay. As a basic example, a two-year Treasury pays just 0.67% as of this writing, but by buying a 10-year, you'll get 2.11%. A 30-year Treasury pays an even higher 2.69%. So, it would seem like the longer-maturity bonds would be the best bet.

Why long-term bonds could be a bad investment in 2015
Bonds work by the issuer collecting a certain amount of money (usually $1,000 per bond) and paying an agreed upon interest rate based on that initial amount for the duration of the bond. At the maturity date, the original investment is returned to the buyer and the bond ceases to exist.

However, between the issue date and the maturity date, the price of a bond fluctuates significantly based on prevailing interest rates.

Now, buyers of 30-year Treasuries expect a 4% annual yield on their investment, or $40. Well, in order to produce a 4% yield, the price of our original Treasury bond has to come down. Using a rough calculation, a Treasury bond with a 2.69% coupon (or initial) yield would need to cost roughly $670 on the open market in order to give an investor a 4% yield. Of course, this is a simplified example, and our bond would likely retain a little more of its value due to the fact that its holder would receive the original $1,000 back upon expiration, but you get the idea.

Rates are currently at historically low levels, mainly because the Federal Reserve has kept its interest rates near zero since the financial crisis. And, bonds tend to move in tandem with the Fed's Federal Funds Rate, as you can see from the chart below. It's not a perfect correlation, but as a general rule, when one moves up, so does the other. 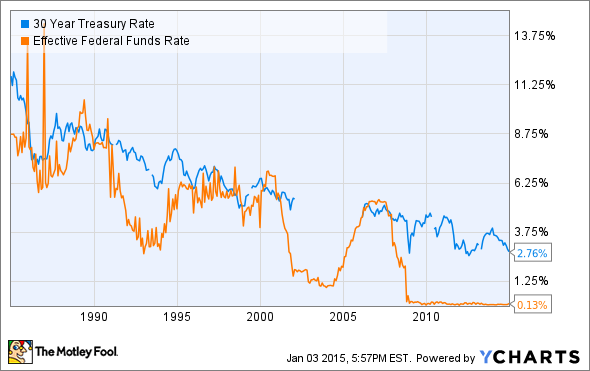 Many experts agreeing that the Fed is likely to begin to raise rates in 2015, which could be bad news for long-term bondholders. Sure, many people who buy long-term bonds have every intention of holding them until maturity, but what if you need your money in a few years? If all you hold in your portfolio is long-term bonds, you could be forced to sell at a steep loss.

A better idea: create a ladder
Instead of buying bonds with the longest maturities possible, it might be a better idea to create a bond ladder.

The basic concept of a bond ladder is to stagger your bonds' maturities in order to protect yourself from interest rate volatility, while still receiving a decent interest rate. And, if Treasuries don't pay enough, the same concept applies to higher-yielding corporate bonds as well.

As an example, consider this hypothetical scenario. Let's say that you have $100,000 to invest in fixed-income securities, and that you still are a decade or so away from retirement. Take that money and divide it into five groups of $20,000. With the first $20,000, buy bonds that mature five years from now. With the second $20,000, buy bonds that mature in 10 years, and with the other three portions, buy bonds with 15-, 20-, and 25-year maturities.

In other words, one-fifth of your bonds will mature every five years, allowing you to reinvest your principle in long-term bonds at the prevailing (hopefully higher) interest rates. Your shorter-term bonds should retain most of their value, even if rates rise, so you'll be able to sell those if you need the money without being forced to take a large loss.

Of course, this is just one example, and you can create your bond ladder with however many time intervals you choose.

Decent income with less risk
By constructing a bond ladder like this, you can take advantage of interest rates as they rise, while preventing your investments from losing too much of their value. Essentially, a bond ladder allows fixed-income investors to create an excellent combination of income and risk management.