Please ensure Javascript is enabled for purposes of website accessibility
Log In Help Join The Motley Fool
Free Article Join Over 1 Million Premium Members And Get More In-Depth Stock Guidance and Research
By Steve Symington - Jan 12, 2015 at 9:58AM

Forget rigid LCDs -- a flexible, new iPhone could be headed your way soon.

Hold onto your hats, Universal Display Corporation (OLED -1.35%) investors, because the Apple (AAPL -0.44%) rumor mill is heating up again. Only this time, the news involves the iPhone 7 and has multiple reports supporting the story.

First, some background
For those of you unfamiliar, Universal Display fills its coffers by licensing its OLED-centric patent portfolio and selling OLED materials to electronics makers. Universal Display's two largest customers are currently Samsung (NASDAQOTH: SSNLF) Display and LG Display (LPL 2.90%), both of which are active in developing and commercializing exciting new devices built around the innovative displays.

Naturally, Universal Display shareholders have wondered for years whether their company's flagship technology will find its way into Apple's wildly popular products, only to be disappointed time and again. That is, at least, if you exclude the upcoming Apple Watch, for which LG Display has all but confirmed it will supply small OLED displays. Even if the Apple Watch sells in huge volumes, however, the comparatively tiny amount of OLED material required for each device means Apple's inaugural OLED product won't have a significant impact on Universal Display's revenue.

A new OLED plant (from an old name)
According to a new report from Japanese tech news site, Nikkan Kogyo Shimbun, Apple may have finally tasked longtime supplier Foxconn (NASDAQOTH: FXCNY) and Innolux to produce OLED displays for its upcoming iDevices.

Specifically, Nikkan first noted a previous report from November concerning a $2.6 billion investment by the two companies to construct a display factory. That investment was said to be made at the behest of a single large customer with "urgent requirements" for the plant's "exclusive production capacity." Given both Foxconn's history with Cupertino and the unique request for capacity, the customer is presumed to be Apple.

Now, Nikkan states, this factory has been been confirmed to be targeting the "2016 or 2017" production of OLED screens for wearable devices, as well as a roughly five-inch smartphone display at around 400 pixels-per-inch. For comparison on the latter, today's Retina LCDs on Apple's iPhone 6 and 6 Plus smartphones feature similar pixel densities of 326 PPI and 401 PPI, respectively. And depending on whether Apple sticks to its typical late-fall introduction of new iPhone models, achieving the early end of the above targeted time frame could mean we see OLED featured in Apple's yet-to-be-named iPhone 7.

Apple's new OLED patent
The fact that wearable devices are said to be included in the mix is a strong indication Apple will be focusing on flexible OLED displays. And wouldn't you know it -- earlier this week, the U.S. Patent and Trademark Office awarded Apple a new broad-reaching patent for "flexible electronic devices."

Among the patent's many illustrations was this unique iPhone mock-up: 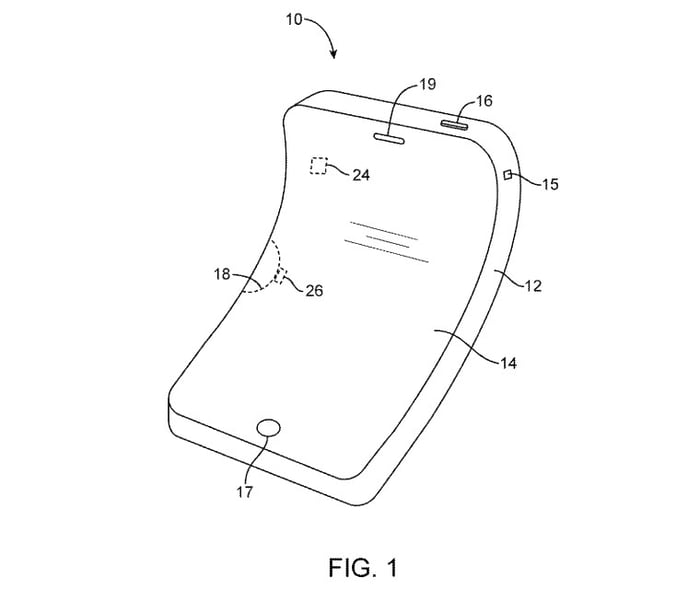 This is hardly a guarantee. Apple has thousands of patents, and not all of them are destined to become actual products. It wouldn't be that out of the ordinary, for example, to see Apple file for this intellectual property merely to prevent or slow competitors' efforts to build similar devices.

In November, Samsung revealed plans to launch a device with a flexible display that can be folded in half by the end of 2015. And according to a recent report from ZDNet Korea, LG Display is currently designing a flexible, rubberized chassis for a smartphone that can be bent at up to a 90 degree angle.

It stands to reason that, with two of its largest competitors already looking to move away from rigid devices, Apple has proper motivation to finally embrace the flexible aspects of OLED technology in its iPhone 7. If Apple's recent patents and Foxconn's new OLED factory are any indication, that seems to be exactly what it's doing.