LinkedIn continues to drive new members to its site, and is monetizing its platform's use better than ever.

CEO Jeff Weiner's efforts to expand LinkedIn (LNKD.DL) internationally haven't stopped the professional social network from growing domestically. Last year, the percentage of adult Internet users in the U.S. that self-report using LinkedIn grew to 28% from 22% in 2013, according to the Pew Research Internet Project. That's a significant acceleration from the prior year when the number grew just two percentage points from 20% in 2012.

Its growth during the last year helped the company maintain its position as the second-most-popular social network among adults, fending off competition from Twitter (TWTR 0.73%) and the rapidly growing photo-sharing sites Pinterest and Instagram. Facebook remains No. 1.

Let's take a look at what LinkedIn is doing to attract more users in the U.S. and what it means for investors.

Need a job? Get on LinkedIn
A common piece of advice for job seekers is to create a profile on LinkedIn with their resumes and other pertinent information. It's true that headhunters are able to pay LinkedIn for the privilege of crawling its 332 million users' profiles in order to find suitable candidates for job openings. But LinkedIn improved the proposition for job seekers last year when it acquired job-search startup Bright.

Bright helped LinkedIn add hundreds of thousands of job openings to its job listings page, which matches up job openings with LinkedIn users based on their profiles. LinkedIn's stated goal is to have every available job opening listed on LinkedIn. With just less than 2 million global job listings on the site, the company still has a long way to go.

LinkedIn has leveraged its position in job listings to create a mobile app -- LinkedIn Jobs -- which spins off the job listings from its website into a simple app. The app is tremendously useful for job seekers, leading them to use it more. As a result, mobile engagement continues to climb for LinkedIn, reaching 47% of unique visitors in the third quarter.

While these efforts in job listings don't translate directly into monetization for LinkedIn, they increase the value proposition for users to sign up for the network and create a profile. In turn, more members increase the value of its recruiting and sales platforms, which allows it to increase prices like it did on Jan. 1.

Get the word out
On LinkedIn's third-quarter conference call, Weiner said its content-publishing platform is the "fastest growing driver of member engagement." LinkedIn started its Influencers program in 2012 with some big names in business, and it opened up the platform to its less famous members in 2014. In the third quarter, the company published nearly 40,000 posts per week.

LinkedIn's publishing platform increases the visibility of its website by adding high-quality content that people will link to, or that will show up in search results. Additionally, it increases engagement from users who use it to publish content and want to reach a wider audience.

LinkedIn is able to integrate its publishing platform with Pulse, a newsreader the company acquired in 2013. Before its acquisition, Pulse had 30 million users to whom it delivered personalized content from around the web. Pulse opened up another avenue for LinkedIn to draw users back to its social network.

Again, LinkedIn doesn't generate revenue directly from its publishing platform or Pulse. It simply increases its reach and engagement, which benefits its advertising business, as well as its sales-and-recruiting platforms.

Monetizing use, not users
LinkedIn's management has done an excellent job of monetizing its high-value niche. Advertising revenue accounts for less than 20% of LinkedIn's total revenue. Comparatively, Twitter's ad revenue accounted for 89% of its third-quarter revenue.

Earlier this month, Fab.com CEO Jason Goldberg suggested Twitter revamp its revenue model to monetize use, not users. LinkedIn is doing just that by leveraging its network as a tool for recruiters and sales people to find leads -- and charging them for it. Twitter monetizes its use to a degree by selling its data to licensed partners, but it's a relatively small portion of its total revenue.

With its superior monetization model, LinkedIn should be able to continue growing its revenue well beyond Twitter despite Twitter's lead in unique views per month. Twitter claims more than 750 million unique visitors per month, including logged-out visitors. LinkedIn only manages to see 90 million unique visiting members per month. Still, LinkedIn's revenue is nearly twice as high as Twitter's, and it's particularly adept at turning that revenue into cash. 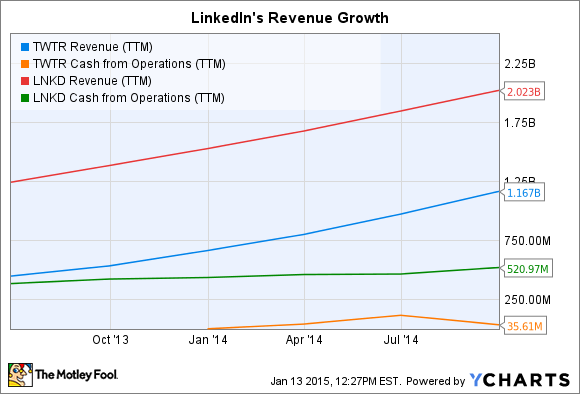 Continued growth in membership and engagement will indirectly lead to revenue growth for LinkedIn through price increases and additional sales on its sales, marketing, and recruiting tools that it's built on top of its network.

Twitter is expected to generate $2.29 billion next year compared to LinkedIn's projected $2.94 billion in revenue. But analysts see LinkedIn generating more than 60% more in earnings than Twitter.