Please ensure Javascript is enabled for purposes of website accessibility
Log In Help Join The Motley Fool
Free Article Join Over 1 Million Premium Members And Get More In-Depth Stock Guidance and Research
By Rich Duprey - Jan 15, 2015 at 8:26AM

The handbag maker wants the glitz of luxury, but it could tarnish its reputation.

Handbag maker Coach (TPR 0.54%) is betting luxury shoemaker Stuart Weitzman will help cement its reputation as an upscale lifestyle brand, and though the $574 million all-cash acquisition drew a lot of praise from Wall Street, this is a risky move that offers significant reason for Coach investors to worry.

Coach is running away from its association with accessible luxury that has served it well for decades, as well as from competition with Michael Kors (CPRI 1.57%), Kate Spade (KATE), and Tory Burch. But Coach's hopes to reimage itself into an upscale lifestyle brand won't necessarily reverse its slide in sales.

Not exactly a shoe-in
Shoes have been integral to Coach's transition from the start. The company installed salons dedicated to the accessory in some of its flagship stores to showcase what it called "the new world of Coach." When Stuart Vevers came on board as creative director, shoes took center stage with his Fall 2014 men's collections.

But handbags remain Coach's bread and butter, and adding more shoes won't fix what's wrong there since the women's shoes industry is not exactly lacking in competition. While the Stuart Weitzman collection will give Coach access to higher-end department stores like Nordstrom (NYSE: JWN), Neiman Marcus, and Saks, it's also going to be yet another women's shoe on display.

Moreover, when The Jones Group, the former owner of the shoemaker, reported full-year earnings last year, it said its international wholesale revenue was hurt by Stuart Weitzman because of European economic conditions and unfavorable movements in the euro.

Stuart Weitzman brings in $300 million in trailing revenue, and has grown at a 10% clip annually for the past five years. For Coach, which is in a period of protracted sales declines, any growth looks good, but in a $4.8 billion business that's still little more than pocket change.

These are hardly conditions Coach needs at the moment, especially because the company forecast same store-sales would plunge in the mid- to high-20% range for 2015 as sales in China and Japan slow appreciably, continuing a trend that has only gained speed after it began rebranding itself. 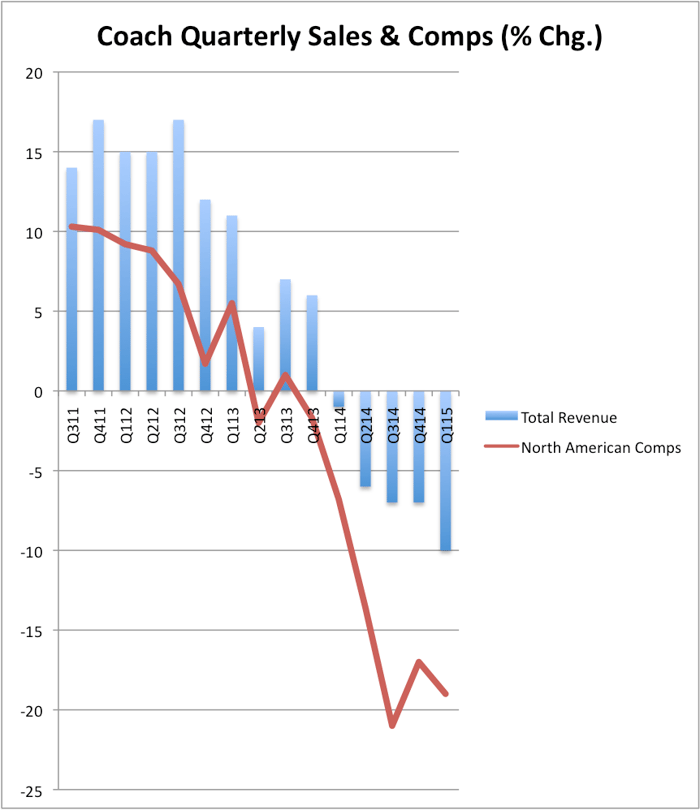 As the chart indicates above, North American comps have particularly suffered. Today, some 30% of Coach's handbags are priced above $400, compared to just 21% last year, which suggests customers might be rejecting the new pricier image.

Risky business
Coach rarely makes acquisitions, preferring instead to juice growth organically, so it's not necessarily adept at integrating acquisitions or folding new corporate cultures into existing structures. It is also undertaking this maneuver as it closes 20% of its North American store footprint, seeking the end of eroding profits through discounting.

The risk, of course, is that consumers have come to rely upon Coach's discounting program and may exit the retailer in droves, similar to what J.C. Penney (NYSE: JCP) experienced after abandoning its doorbuster sales in favor of everyday low pricing. The Stuart Weitzman acquisition only inserts a larger wedge between Coach's primary customers and those it aspires to reach.

For investors, this acquisition might be a costly experiment in trying to step beyond its comfort zone. The purchase will take up a sizable portion of the $907 million in cash Coach reported at the end of its first fiscal quarter, and it could be on the hook for another $44 million if revenue targets are achieved over the next three years.

While it looks like Coach has laced up the acquisition of Brown Shoe (CAL -0.23%), which was also reportedly interested in Stuart Weitzman, it may just be Coach's investors that are tripped up by the deal.