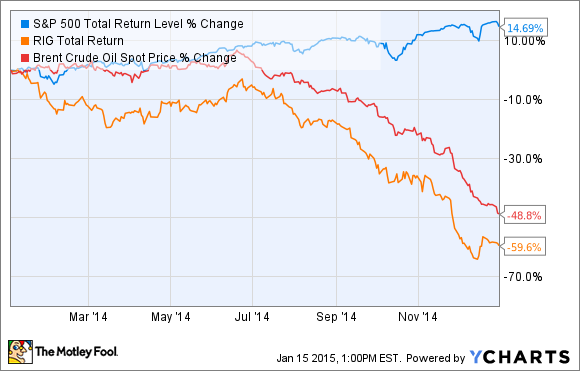 Transocean, like just about every other rig company, built up its fleet in response to a message that became common worldwide a few years ago: oil is going to become increasingly more difficult to find, and we will need lots of new, high-specification offshore drilling rigs to extract it. However, the writing on the wall entering 2014 suggested Transocean and its peers had overreacted and that the whole industry was headed into a down cycle.

Guess what? That is exactly what happened, and then the market threw in a near-50% drop in the price of oil to make things even worse for the company.

The glut on top of the glut
As 2014 began, it appeared the companies with the fat wallets to spend on offshore projects -- mostly the integrated majors -- were tiring of spending big on new production with little in free cash flow generation to show for it. These big spenders started cutting their capital budgets by focusing on finishing existing projects and taking on fewer new exploration and appraisal efforts that would require the service of offshore rigs.

Add this to the massive newbuild programs that rig companies such as Transocean and Seadrill undertook prior to this move by their clients, and last year saw a slew of new rigs coming online without much demand for them. This has resulted in some rigs going without contracts, while dayrates are down slightly for those that have been put to work. As Transocean Senior Vice President of Marketing Terry Bonno said in the company's second-quarter conference call:

Deepwater and mid-water markets remain weak but largely unchanged and at in previous oversupply cycles most capable rigs will compete down and displace lower specification units. We expect this displacement will result in some units being permanently retired as continued investment in this fleet may not yield the necessary economic returns over the remaining life of the asset. This is an industrywide issue and this will play an important role in the future supply and demand picture.

The cherry on top of the pain sundae has been the complete free fall of the price of oil. At today's price level, very few offshore oil projects are considered economically viable, making the risks of drilling for new offshore fields even less attractive.

This has been especially hard on Transocean because it has a large fleet of legacy rigs that are considerably older and in less demand than newer, higher-specification rigs. To alleviate this problem, Transocean announced the scrapping of 11 of its older rigs -- most of which had been out of work for some time. The company also proposed the spinoff of several of its lower-specification rigs into an entity known as Caledonia Offshore Drilling, but that plan did not get far in the face of market demand that was weak at best. On top of all of this, investors are now pricing in the possibility that Transocean will cut its dividend in order to stay afloat until this storm of low oil price and rig oversupply passes.

What a Fool believes
Transocean is on the losing side of several trends right now. It has a huge fleet of aging rigs that aren't too attractive to companies looking to explore new parts of the ocean, and it has a bunch of new rigs coming online at a time of weak demand. Long term, these new rigs will find a home. Declining production at existing wells will eventually catch up to today's glut of oil supply, and new investments in offshore drilling will be necessary. Until that time, though, its going to be rough sailing for Transocean's stock price, and investors should be ready to ride out this pain for a while longer.

Tyler Crowe owns shares of Seadrill.  You can follow him at Fool.com under the handle TMFDirtyBird, on Google+, or on Twitter @TylerCroweFool.

The Motley Fool recommends Seadrill. The Motley Fool owns shares of Seadrill and Transocean. Try any of our Foolish newsletter services free for 30 days. We Fools may not all hold the same opinions, but we all believe that considering a diverse range of insights makes us better investors. The Motley Fool has a disclosure policy.