Critics say that Google and friends aren't moving to Lollipop fast enough, yet another symptom of Android fragmentation. Here's why it really doesn't matter.

Last week, I tackled rumors surrounding Netflix and its fight with VPN pirates. Today, I'll look at Android and its struggle with fragmentation.

If you pay any attention to Google (GOOG -1.92%) (GOOGL -2.10%) and the Android mobility platform, you've probably seen the recent headlines portending doom and gloom for the operating system:

All of these articles were published in the last week, in response to the updated rundown of Android adoption stats. The rallying cry is almost universal: Version 5.0, or Lollipop, is off to a slow start, and it has to be bad news.

At first glance, the situation does look grim. Among data collected in the first week of January, the Lollipop version didn't even merit a mention. This implies that less than 0.1% of all Android devices visiting the Google Play app store are running that version right now. 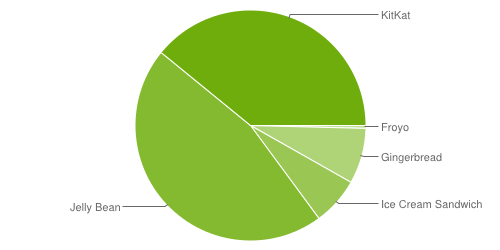 Compare that to Apple (AAPL -0.93%), whose latest iOS 8 software runs on 68% of all active iPads and iPhones. Admittedly, the Apple update has been around since September while Lollipop only dropped down in early December, so it's not a completely fair comparison. Still, the adoption gap is huge and the release schedules reasonably close.

But this is hardly an issue as those alarmist headlines may want you to believe. Let's go bust a few myths, shall we?

Myth No. 1: The Play Store measurement is always accurate
First, there's the idea that the Play Store figures behind the chart above are based on the best available data. They're not.

As an Android app developer, I have access to a different set of adoption figures, broken down into various app categories. None of these show a market share as disappointingly low as 0.1% for Android 5.0. 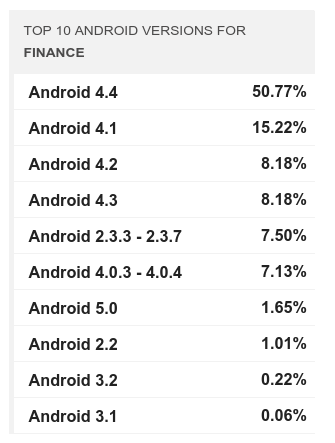 The lowest Lollipop adoption figure I found through my data was in the category of casual games, where the platform accounts for 0.4% of active installations. The adoption figures only improve from there, going all the way up to 1.7% for financial information apps.

Yes, these numbers are still small and insignificant next to Apple's 68%, but Lollipop adoption in nearly every category turns out to be at least an order of magnitude higher than the Play Store report would indicate.

These adoption figures mean little the grand scheme of things though -- a point that becomes increasingly clear as we move on to our next myth.

Myth No. 2: Android versions are set in stone
This used to be true. If you wanted all the goodies of version 4.4, or KitKat, you simply had to do a wholesale upgrade from whatever lower version ran on your device previously. These system updates are custom-fitted to each device by the manufacturer and often again by the wireless network provider.

These updates also take time, money, and resources, which is why Android devices in the wild often lag far behind the cutting edge of what Google has made available. Sometimes, either the phone maker or the network simply shrug and move on without ever producing an upgrade to the newest Android platform.

It's often billed as the biggest upgrade in Android history, adding a ton of new features and a brand new visual design. Google itself calls Lollipop "the largest and most ambitious release for Android yet." But this time, everything is not crammed into a must-have full-system upgrade. Instead, for the first time, many parts of the new system have been broken out as stand-alone apps in the Google Play app store.

For example, the Google Play Services app is installed alongside the Play Store app library on every device with an Android version recent enough to access the Play Store. Then, it's typically set to update itself automatically, with no user interaction necessary, making it nearly universal on modern tablets and handsets.

This app gives other app developers a way to hook into essential Google services like the Wallet payment feature, Maps mapping and navigation, and Google+ social sharing. It also provides some network security upgrades and lets users share their screen's display with a nearby Chromecast dongle.

All of these are features you might expect to see in a regular system upgrade. Instead, they come in this easily updated stand-alone app, compatible with Android versions as aged as 2010's version 2.3, or Gingerbread.

That's not everything. All of Google's core apps have been updated to take advantage of Lollipop-level upgrades to the Play Services piece. They've also been redesigned to comply with the new Material Design philosophy, which also depends in large part on Play Services updates. That brings a new feel to many of the things you do on a daily basis, like reading your email or checking calendar appointments. All of this already behaves more like a Lollipop system and less like an old Gingerbread or KitKat platform.

In general, your Android device probably already includes a fair bit of Lollipop features -- even if you don't actually have the full system upgrade installed. The only exceptions would be hopelessly outdated devices that simply can't run newer Google Play Services and Google Search apps, or users who prefer updating their apps manually and haven't gotten around to it in the last several weeks.

Myth No. 3: Android has a real fragmentation problem
If you haven't noticed by now, let me tell you that a fair share of the features for Android's "largest and most ambitious" version are available without the blessing of handset makers and network operators. Upgrade to the latest Google Play Store and Google Search, and you're well on your way to a serious Lollipop experience.

This includes the much vaunted Material Design, better network encryption services, and an all-around stronger integration with Google's infrastructure. Google and other app developers can tap into the pieces you likely already have on your phone, and it's a close approximation of the total Lollipop experience.

A half-KitKat, half-Lollipop device will miss a few features -- a new notification system, small performance improvements, and expanded hardware support -- but none of them are deal-breakers in my opinion.

But the key features needed by the latest and greatest games and tools in the Play Store, they are provided by the separate Google apps described above. In general, any old Gingerbread or Jelly Bean system should be able to run almost any new app, even if it's designed with Android 5.0 features in mind.

Google hasn't eliminated Android fragmentation. Indeed, the variety of unique hardware combinations and user experiences remains as staggering as ever. But in a classic end-run maneuver, Google is letting users work around the restrictions of outdated software caused by foot-dragging middlemen.

Apple would never settle for this hybrid solution, which is why the company controls both the hardware and software designs on just a handful of specific devices. But when you're working with a veritable army of hardware partners, like Google does in the Android market, it just makes sense to break the platform apart and let users pick up the pieces where they can.

Given how well designed this approach looks in hindsight, I'm only sorry that Android wasn't given a modular design from the start. But hey -- even mighty Google lives and learns.