With the Dow jumping up or down by 100-plus points nearly every day, which stocks can help investors rest easy?

The stock market has not changed much in 2015, with the Dow Jones Industrial Average down 1.75% since the turn of this year. However, 100-plus point moves have been the rule rather than the exception. In just the past couple of weeks, the Dow has plunged 400 points, gained those points back, and then dropped and rallied again. 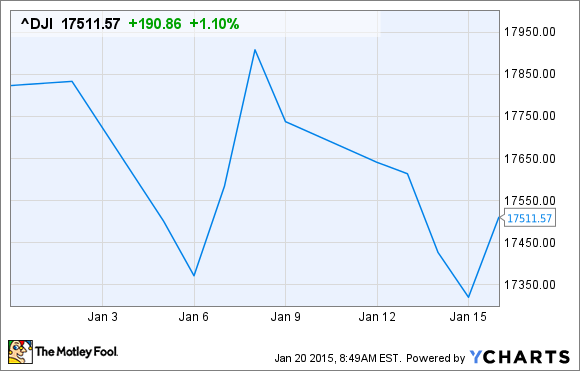 What are investors to do in the face of this kind of market volatility? We asked three of our analysts which stocks they prefer when the market becomes erratic, and here is what they had to say.

Matt Frankel
When the market gets volatile, the best-performing stocks tend to be low-beta (a measure of volatility) stocks that many investors consider "boring," such as Johnson & Johnson (JNJ -1.10%). Not only do these do well during the tough times, but they produce results that are anything but boring.

A stock with a beta of more than one is more volatile than the S&P, while a beta under one means it is less volatile. Johnson & Johnson has a beta of 0.87, and while this isn't the lowest in the market, J&J offers an excellent combination of safety and growth.

And one of the main reasons that J&J does well in turbulent times is that it produces things people will always need, in both good times and bad. People need their medication, hospitals and doctors need medical equipment, and people need household consumable goods. J&J also has the brand recognition to give it a strong competitive advantage. After all, some of the strongest brand names in the world (Band-Aid, Tylenol, and Neutrogena, to name a few) are among J&J's products.

The proof is in the performance, as over the past 20 years J&J has averaged a total return of 13.3% versus the S&P's 9.5%. As Warren Buffett has said many times, it's more important to outperform the market in bad times than in good times. Stocks such as Johnson & Johnson should outperform in the bad times and over the long run.

Selena Maranjian
The first thing to know about volatile markets is that they shouldn't freak you out. The stock market doesn't simply go up in a straight line -- although, over long periods, it has always produced substantial returns.

Still, if you want a low-volatility stock to calm your nerves in turbulent markets, check out Buffett's Berkshire Hathaway (BRK.A 1.66%) (BRK.B 1.71%), which has a beta of 0.25 and a 30-year average annual gain of 18.7%. Though it does own plenty of businesses whose fortunes can fluctuate with the overall economy, Berkshire Hathaway's core businesses include lots of steady industries such as insurance, furniture, railroads, food, and clothing.

Berkshire's unique composition offers it a competitive edge: Buffett, a master of capital allocation, can take money from his businesses that generate lots of excess cash and then invest it in other businesses that need it. For example, See's Candies and Berkshire's various insurance companies, such as GEICO, generate gobs of cash. Berkshire's energy businesses and its BNSF railroad, meanwhile, are more capital-intensive and can use that company to expand and update plants and equipment. For instance, one energy holding is aiming to invest $15 billion in renewable energies. It's a profitable synergy.

Berkshire's management also offers peace of mind in a volatile market. Many companies will make moves like quietly increasing their share count, diluting the value of existing shares, or paying too much in ill-advised deals, but Buffett is famously rational and conservative. Most of his acquisition dollars have delivered great value for the company, and Buffett is willing to let a lot of money pile up until he finds the right investment opportunities. His sensible nature, phenomenal track record, and patient, long-term view make his company a great holding in volatile and calm markets alike.

The company has the dominant tobacco brands around the world, excluding the U.S., where former parent Altria (NYSE: MO) dominates, and China, where the Chinese government is the only tobacco seller. That's important because while cigarette consumption is dropping in the U.S., worldwide cigarette consumption continues to grow. Philip Morris has the No. 1 brand in 59 countries and a greater than 40% market share in 45 countries.

As Buffett explained over 30 years ago:

I'll tell you why I like the cigarette business. It costs a penny to make. Sell it for a dollar. It's addictive. And there's fantastic brand loyalty.

Given Philip Morris' brand power and market share, as well as the fact that nearly 1 billion people around the world continue to smoke despite all the research showing tobacco's negative health effects, this company is unlikely to be disrupted anytime soon.

Another reason the stock is great for volatile markets is that it pays a quarterly dividend that has steadily grown since the company's spinoff from Altria in 2009. At current prices, Philip Morris has a generous forward yield of 4.8%.

That big dividend is great for volatile markets, as research has shown that dividend-paying stocks are less volatile than the average stock, as their prices as supported by their high yields. Legendary contrarian investor David Dreman found in "When the Bear Growls: Bear Market Returns 1970-1996" that a high-yield dividend portfolio declined half as much as the market during down quarters.

When the market is down, you can take comfort in knowing that higher-yielding dividend stocks also make it easier to recoup losses, as your portfolio will generate ample cash to take advantage of the low prices created by the volatility. This creates opportunities for you to sift through the market's wreckage and buy stocks at discounts.