Here's why American Express's earnings were better than investors gave it credit for.

American Express' (AXP 0.18%) fourth-quarter earnings report revealed that profits were up, helped by a 6% and 7% increase in spending and loan balances, respectively. But all-important expense levels and loss provisions stole the show.

The company reported that its consolidated provisions for loan losses jumped to $582 million this quarter, up 22% from a year ago, which some took as evidence that falling loan performance may be around the corner. Meanwhile, expenses jumped, crimping earnings. Let's take a deeper look.

Taking a look at provisioning
Financial companies set aside provisions for loan losses that may develop in the future. These serve as tea leaves through which investors can get some idea of how a management team feels about the quality of its loan book.

American Express gives a good view of its recent provisioning in its earnings supplement. The company provisioned for greater loan losses than in prior periods, but only after several quarters of reserve releases. What was a benefit in prior quarters (letting reserves come down on an absolute basis) has turned into a negative (reserves are going back up). 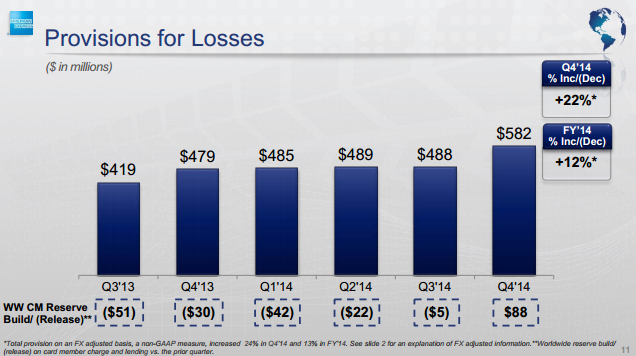 Based on the company's current credit metrics, loan losses don't appear to be a problem. Its reserves cover its current past-due loans 1.74 times over in the United States, and 1.67 times over around the world. In addition, its net write-off rate came in at 1.7% for principal and fees in the fourth quarter, down from 2.1% at the end of the first quarter.

There's nothing here to suggest it's time to panic quite yet -- credit trends are getting better, not worse.

What about expenses?
Expenses were up, but they were largely driven by what could be called "one-time" events.

The company took a $313 million restructuring charge in the quarter as part of a plan to lay off as many as 4,000 people, or roughly 6% of its workforce. That charge, though initially painful to one quarter's earnings, should pay dividends in the form of lower operating expenses in the future. On the conference call, it was suggested that the savings would start to build over the full 2015 calendar year.

Furthermore, the company renewed a partnership with Delta Air Lines on an earlier schedule, which added $109 million to pre-tax expenses this quarter. Those two items took a healthy bite out of a previously announced pre-tax gain of $719 from the sale of an investment in Concur Technologies (NASDAQ: CNQR), some of which came through in the previous quarter.

A Foolish perspective
While the headlines may read of surging loss provisions and rapidly growing expenses, neither item is particularly outsized when put in context.

After all, at the bottom line, this is a business that grew net income by 11% in the quarter, and which delivered diluted earnings-per-share growth of 14% in fiscal 2014. That's hardly poor performance for what is very much a "mature" company.

Jordan Wathen has no position in any stocks mentioned. The Motley Fool recommends American Express. Try any of our Foolish newsletter services free for 30 days. We Fools don't all hold the same opinions, but we all believe that considering a diverse range of insights makes us better investors. The Motley Fool has a disclosure policy.