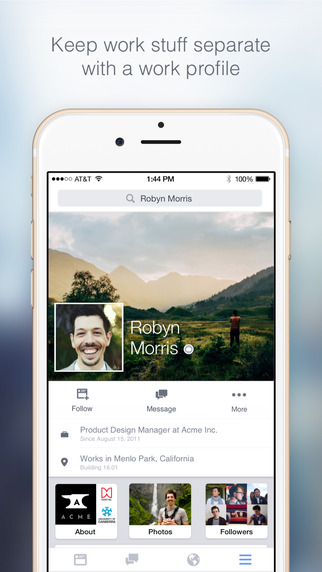 Fresh on the heels of Mark Zuckerberg's Facebook (META -2.03%) at Work preliminary rollout, LinkedIn (LNKD.DL) is reportedly working on a similar suite of tools to connect coworkers.

LinkedIn's initial effort reportedly includes enabling employees of the same company to send messages via InMail (LinkedIn's private messaging system) to each other even if they're not in one another's network on the site. It also helps employers create a database of contact information for its employees.

Like LinkedIn's planned offering, Facebook at Work will also allows coworkers to message each other. In addition, it will provide a News Feed of activity, and allow coworkers to create specific groups -- ostensibly for teams or special projects.  All of this is currently possible through Facebook's flagship product, but Facebook at Work keeps your professional life separate from your personal life -- which is almost the entire point of having a LinkedIn account.

Stop me if you've seen this before
Facebook at Work rolled out to just a few select partners last week. The rollout seems familiar to how Zuckerberg and Co. rolled out Facebook to select universities before opening up the platform further. The strategy created strong demand for Facebook and eventually enabled it to surpass every social network that came before it.

That's the risk for LinkedIn -- that it turns into MySpace. LinkedIn has over 330 million registered users and 90 million unique visitors per month. Those numbers are pretty similar to MySpace at its peak, which had over 100 million monthly active users back in its heyday.

But LinkedIn is in a stronger position than MySpace ever was. Its current Talent Solutions customers continue to flock to the service. In the first nine months of the year, Talent Solutions revenue grew 48%. This ensures LinkedIn users that the best place to get discovered by a recruiter is on LinkedIn. In Q3, Talent Solutions provided 61% of net revenue, followed by Premium Subscriptions at 20% and Marketing Solutions at 19%.

Of course, Facebook could overcome that by building tools for intra-office communication and interaction that outperform what's available through LinkedIn. Facebook could then build a network or database from its users, and do exactly what LinkedIn does -- stealing business away from the incumbent professional network in the process.

As such, LinkedIn needs to do what it can to keep its users engaged with its platform before Facebook begins expanding Facebook at Work.

That's not exactly LinkedIn's strong suit
LinkedIn's platform isn't like Facebook, where users come back every day and constantly post updates. In fact, more than two-thirds of its registered users don't visit the website even once a month. That's OK, though, because LinkedIn is able to monetize its 332 million registered users even if they're not on the website. It sells access to its network to salespeople and headhunters, which makes up the majority of its revenue.

However, losing engagement to Facebook at Work carries much higher risks that Facebook could eventually steal business away -- hence LinkedIn's response to Facebook's new intra-office app.

LinkedIn is also increasing engagement by parsing out features into individual apps, similar to Facebook's approach with its flagship app. One of its most recent apps is LinkedIn Job Search, which Weiner told analysts received four times the engagement compared with LinkedIn's flagship app. The company also made specific apps for recruiters and salespeople to navigate its network. The new intra-office communication tools will include a new app as well.

Priced in
The good news for LinkedIn investors is that a lot of the risk involving Facebook at Work is already priced in. When early reports came out that Facebook was working on productivity tools, LinkedIn shares fell 5%. The share price fell again last week, after additional details came out on Facebook at Work.

Of course, LinkedIn investors should pay close attention to how Facebook at Work performs. If Zuckerberg is still talking about it on earnings calls a year from now, that probably means it's growing well and the company plans to monetize it. My guess is that it will follow a similar monetization strategy as LinkedIn, which bodes poorly for LinkedIn's business. On the other hand, Facebook at Work could fade into the background, just as many other Facebook projects have before it.

Adam Levy has no position in any stocks mentioned. The Motley Fool recommends and owns shares of Facebook and LinkedIn. Try any of our Foolish newsletter services free for 30 days. We Fools don't all hold the same opinions, but we all believe that considering a diverse range of insights makes us better investors. The Motley Fool has a disclosure policy.