Please ensure Javascript is enabled for purposes of website accessibility
Log In Help Join The Motley Fool
Free Article Join Over 1 Million Premium Members And Get More In-Depth Stock Guidance and Research
By Timothy Green - Jan 24, 2015 at 11:37AM

Why have Wal-Mart and Costco been so successful when other retailers have languished? Read on.

What's the difference between an average retailer and a great retailer? Why was it that Wal-Mart (WMT -0.61%), founded more than 50 years ago in Arkansas, grew to become the largest retailer on the planet, instead of rivals such as Target or Kmart, which were both started around the same time? Why has warehouse club Costco (COST 0.55%) been able to grow like gangbusters over the past few decades, while so many other retailers have struggled?

Wal-Mart and Costco are run very differently from each other, but they share one common trait that most retailers lack. One of the secrets behind Wal-Mart's and Costco's success over the years has been the ability to keep customers coming back, over and over again, without having to resort to rampant promotions and advertising. Sam Walton, the founder of Wal-Mart, explained this point in his book Made In America:

[I]f the associates treat the customers well, the customers will return again and again, and that is where the real profit in this business lies, not in trying to drag strangers into your stores for one-time purchases based on splashy sales or expensive advertising.

No advertising, no problem
Wal-Mart is actually one of the world's largest advertisers, spending a whopping $2.4 billion on advertising in 2013. But as a percentage of its revenue, Wal-Mart spends far less than nearly every other major retailer: 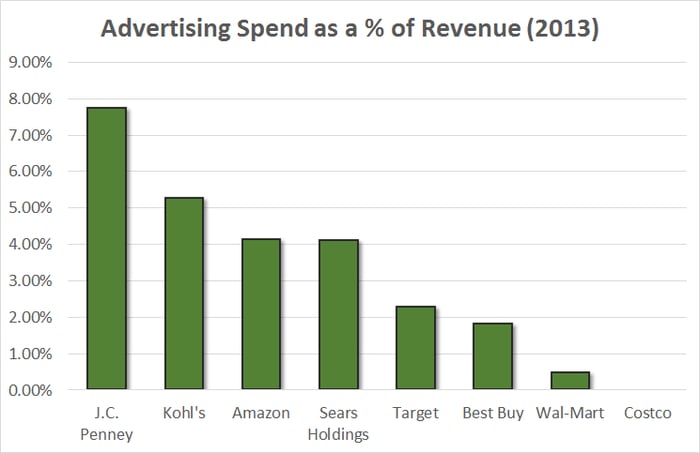 The exception is Costco, which spends essentially nothing on advertising. Costco does occasionally send out mailers to existing and prospective members, but it doesn't participate in the type of advertising that most retailers rely on.

Wal-Mart has never spent very much on advertising relative to its size. In the early days, the company expanded around the area where it was founded, essentially saturating the market with Wal-Mart stores. This approach allowed the company to rely mainly on word-of-mouth instead of having to spend money introducing people to Wal-Mart though newspaper advertisements.

As Wal-Mart grew, its reputation for offering the lowest prices preceded it. Advertising and promotions can get a customer in the door once, but Wal-Mart was able to get that customer to come back by offering exactly what the customer wanted: the lowest prices, a huge selection, and a good experience.

Wal-Mart accomplished this feat by being extremely efficient. It paid its employees as little as it could get away with, it built a vast computerized distribution network to feed its stores, it operated its own fleet of trucks instead of relying on a third party, and it ran its offices with as little bureaucracy as possible.

If Wal-Mart needed to advertise at the same percentage of revenue that Target currently does, its operating profit would be slashed by about one-third. If it advertised at the same percentage of revenue as Sears Holdings, the parent company of Kmart, operating profit would fall by about two-thirds. The reason Wal-Mart can report consistent operating margins of around 5% to 6%, year in and year out, while moving nearly $500 billion of goods annually, is that it doesn't have to convince people to come to its stores. It's as simple as that.

Costco does things quite a bit differently. While the company also runs a lean operation, it pays its employees extremely well. The average wage of a Costco worker is around $20 per hour, nearly twice the national average for retail workers. Why can Costco pay its employees so much? Because they're far more productive: 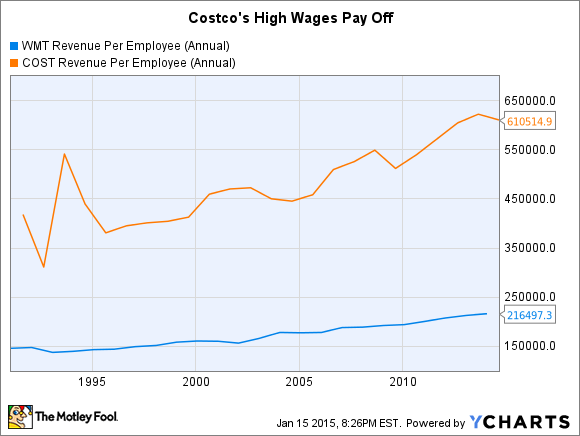 Well-paid employees make for happy employees, and happy employees treat customers well, making for a good shopping experience. Costco also marks up its items far less than other retailers. Its gross margin has been around 12.5% over the past decade, compared with 25% at Wal-Mart. Costco can take this approach because of its business model of charging an annual membership fee for the privilege of enjoying those extremely low prices.

Costco ultimately provides the same thing as Wal-Mart: exactly what the customer wants. Just like Wal-Mart, it doesn't need to persuade customers to visit its stores, and that makes the business model work. Spending just 1% of revenue on advertising would wipe out more than one-third of Costco's operating profit, and that would have probably made the company's expansion over the years occur significantly more slowly.

This isn't to say that a retailer that spends heavily on advertising can't make plenty of money. During good times, companies such as Kohl's and J.C. Penney, both of which are big advertisers relative to their size, can earn profit margins far in excess of what the Wal-Marts and the Costcos of the world earn.

But those good times don't last forever. When a retailer is dependent on advertising and promotions to drive sales, if the marketing stops working, things can fall apart. J.C. Penney is struggling to make a comeback after its sales collapsed a few years ago, and Kohl's has seen its operating profit fall by nearly 25% over the past few years. Kohl's and J.C. Penney both need to advertise heavily in order to drive customers to its stores. Wal-Mart and Costco don't.

That's the difference between an average retailer and a great retailer.