Offshore drilling operator Seadrill Ltd (NYSE:SDRL) has had a rough past year. Its aggressive growth -- funded by cheap debt -- combined with the collapse in the price of oil have forced the once-dividend dynamo to suspend its payout and focus on debt, while the oil price and supply morass plays out. The result? 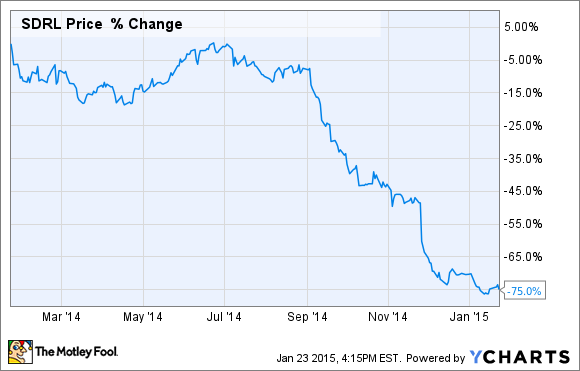 The thing is, there's not a lot of certainty around the offshore market right now, and no guarantees that Seadrill -- with all of its debt and more newbuilds coming online soon -- has a clear path forward. Since last year, experts have been warning that offshore drilling demand would be soft, and that was when oil was $100 per barrel.

Here we are today, and oil is still below $50. Even more concerning, there's plenty of cheaper onshore oil production to meet the paltry growth in demand expected over the next few years. So, what does Seadrill do? It extends itself even more, agreeing to guarantee as much as $2.6 billion in debt for subsidiary North Atlantic Drilling Ltd (NYSE: NADL). What does this mean for Seadrill investors? Does it raise the risk level even further? Let's take a closer look.

The high cost of Seadrill's debt and dividend
In many ways, the collapse in oil prices, driven by both lagging demand growth and exploding production of oil in shale formations, led to the worst-case scenario that I cautioned investors about as far back as last June. The reality is, even the risks I saw back then were tied more to Seadrill's high debt load and the softness in offshore drilling, not to the potential collapse of oil prices. I don't think anyone really saw this coming. At any rate, Seadrill's debt servicing costs have exploded over the past six years: 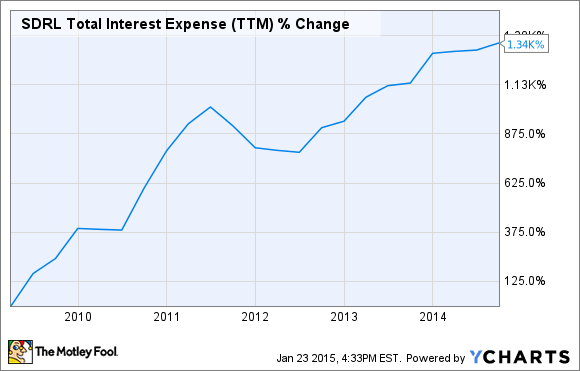 Debt servicing expenses increased from below $50 million in 2009 to a whopping $437 million over the past 12 months. That's more than 8% of total revenue just to pay interest on more than $13 billion in long-term debt. In short, management made a calculated risk that oil demand would stay strong, and its fleet -- the newest and most capable in the business -- would remain in high demand. Management didn't necessarily make a bad call. The company's outlook would be much worse if it didn't have the quality fleet that it does. The other part of the story is the -- in hindsight -- exorbitant dividend the company has paid for years: 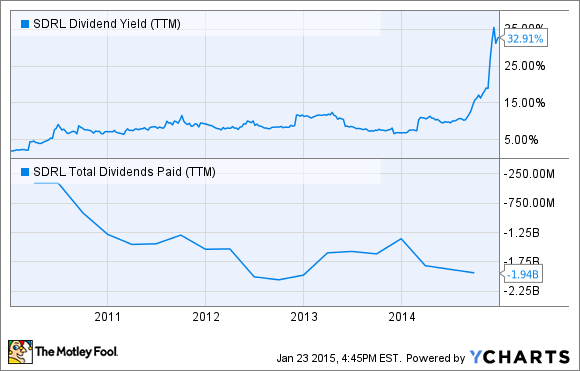 Instead of paying a yield that was twice its peers, Seadrill would have clearly been better off using at least part of those cash flows to fund its newbuild program. Maybe nobody could have seen oil fall so precipitously, but oil prices rising and falling sharply isn't exactly a new phenomenon: 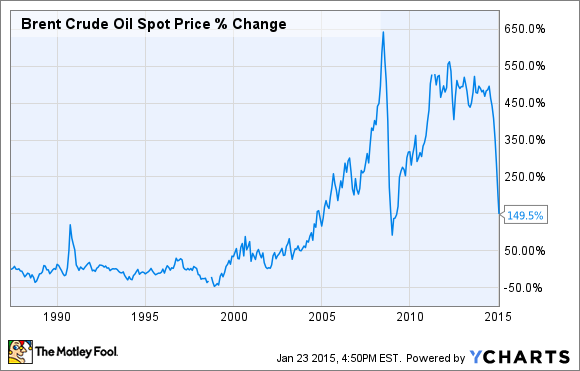 Seadrill management made a seriously leveraged bet that oil prices and demand would remain strong, and they simply got it wrong.

The issue with this move? It further complicates Seadrill's debt picture. Assuming liability of another $2+ billion in debt could have an impact on the company's ability to secure the best terms on its own debt in the future. Considering that there are still more than a dozen newbuild ships the company must take possession of in the next few years, it's a real risk to consider.

Looking ahead
I have to admit, it's been tough to hang onto my Seadrill shares. However, the company's revenue streams for the next 18 months are largely already under ironclad contract, significantly reducing the risk Mister Market sees. Furthermore, agreeing to guarantee North Atlantic's debt almost assuredly is a necessary step to gain the best possible terms for the subsidiary, which does matter for Seadrill. Hopefully this doesn't cause any material issues -- I don't expect it will.

At the end of the day, I'm not convinced it's either good or bad, and Seadrill remains a stock I wouldn't buy more of today. I own shares, and I'm not planning to sell, but the uncertainty around oil demand, and the potential to grow onshore production quickly to meet weak demand growth, make it really difficult to see offshore drilling rebounding anytime soon. As long as there's this much uncertainty, Seadrill looks like a potential value trap. There are too many great companies with more predictable businesses to make Seadrill worth the risk today.

Hopefully that will change -- but until it does, I'm sitting on my hands.