The momentum has yet to subside for America's largest railroad. In the fourth quarter of 2014, Union Pacific's (NYSE:UNP) railcars were once again filled with shipments of good and commodities. And its financials -- as a result -- were filled with superlatives.

It was the "best ever" quarter for the Western carrier on three levels: operating income, bottom-line earnings, and operating ratio. For shareholders, this translated into an earnings-per-share figure that was $0.10 above analysts' expectations -- Union Pacific's largest earnings beat in 2014: 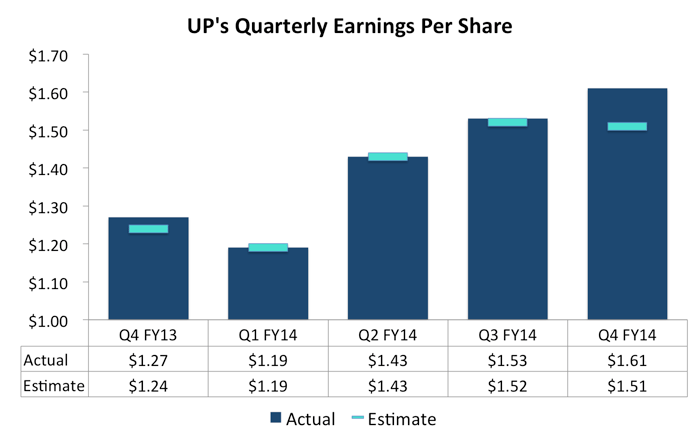 An earnings-per-share increase of 27% year over year is a rare feat in railroads, and the market took note by bidding shares up 5% last Thursday. During the conference call, management elaborated on the business drivers working in the company's favor and discussed those that could pose challenges looking toward 2015. Here are the top three insights from the company's latest quarter.

1. A balanced cargo mix sets this railroad apart
As we Fools have pointed out before (here and here), there are some notable advantages to running a railroad in the Western half of the U.S. Warren Buffett probably knows this all too well, considering his ownership of the other major Western player, BNSF Railway.

To begin with, there are vast stretches of empty land that are amenable to rail transport. And the challenges of winter weather are less threatening than those in the tumultuous Northeast Corridor. Finally, what we're seeing is greater balance across a wide variety of commodities and goods. Union Pacific's portfolio, as a result, is less susceptible to huge swings in a single category like coal or oil.

To illustrate, the following slide from Union Pacific's presentation shows that volumes in all six of its business groups moved higher in the latest quarter, with industrial products leading the way: 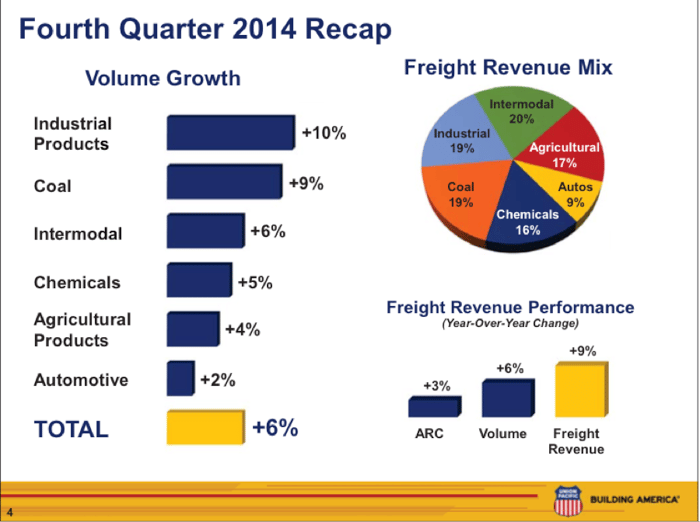 2. Crude prices not a burden yet -- and perhaps no time soon
Leading up to earnings from CSX and Union Pacific, there was much speculation as to how a dramatic dip in oil prices would affect these major carriers. But so far the impact has been minimal.

CSX posted record results and UNP's crude oil shipments were actually up 7% year over year. Once again, UNP benefited from having balance spread across multiple shales and basins: The Niobrara and Uinta crude oil shipments offset the declines in the Bakken.

Looking ahead, the pros and cons of dramatically lower oil prices could continue to have a minimal net effect on these businesses. My colleague Dan Caplinger raised this point at the end of 2014. Basically, lower fuel prices reduce the operating expenses for Union Pacific to partially offset volume declines in chemicals. Second, lower gasoline prices provide a tailwind for U.S. consumer spending and thereby boost UP's other product categories. As CEO Jack Koraleski put it, the spillover from increased consumer spending is already being felt:

And we've seen that in the fourth quarter. The construction products up 17%. Lumber, up 10%.

On the whole, there's good reason to believe oil won't throw a wrench in Union Pacific's entire business even if it's a challenge for the chemicals segment. Management made no attempt to predict where oil would go from here, but did note that rig counts would be reduced and producers would reevaluate plans if prices remained at depressed levels.

3. Congested West Coast ports could pose a threat
If there's one thing that should make investors nervous heading into 2015, it's not oil -- it's labor relations. Since May of last year, labor disagreements have led to increased congestion at many West Coast ports. This has placed a burden on carriers like Union Pacific and BNSF, and the situation does not seem to be improving.

The Wall Street Journal reported that shippers are describing extensive delays at the ports of Los Angeles and Long Beach, which, combined, account for roughly 40% of America's containerized freight. In Seattle and Tacoma, Washington, crew walkouts have reduced container shipping by half.

For Union Pacific, the increased congestion was not detrimental in the fourth quarter, but the language from management suggested it will dampen results in the first quarter. Here's how UP's executive vice president Eric Butler described the potential impact: "[T]he deterioration of productivity at West Coast ports is having an impact on our volume early in the first quarter. At this point, while we are hopeful that the parties will come to a resolution soon, international intermodal will be a headwind until the labor dispute is resolved."

Management also pointed out that a recently appointed federal mediator could serve as a go-between that will help the two parties reach an agreement. To counter the effect of an all-out port shutdown, management said that it has a contingency plan in place to avoid significant delays to the rest of the rail network.

Where does Union Pacific go from here?
A stronger economic outlook due to lower oil prices bodes well for a railroad like Union Pacific. And lower oil prices also helped this carrier reduce its expenses substantially in 2015: The company's operating ratio fell to 63.5 from 66.1. While the first quarter could prove challenging due to delays at ports, the comparisons will be soft given last year's hiccups from harsh winter weather. We'll see how the weather turns out in the next month. Meanwhile, the long-term forecast looks very attractive for investors looking to load up on Union Pacific's stock.