Apple (NASDAQ:AAPL) this week reported record sales of 74.5 million iPhones during its first quarter, up from 51 million units a year earlier. With $18.04 billion in profit on $74.6 billion in revenue, Apple also posted the most profitable quarter for any company in history.

That's great news for Apple investors, but one number from that stellar earnings report worries me: 68.6%. That's how much of Apple's revenue came from iPhone sales alone. 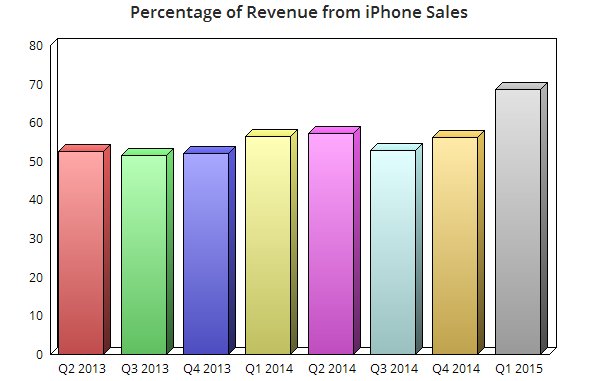 Meanwhile, sales of the iPad have declined for four consecutive quarters on a year-over-year basis. Last quarter, iPad unit sales fell 18% as revenue declined 22%. Between the second quarter of 2013 and the first quarter of 2015, the weight of the iPad on Apple's top line declined from 20% to 12%. As iPad sales faded, iPhone sales successfully picked up the slack, and Apple's total revenue rose 30% year over year last quarter.

But as iPad sales further decline, the weight of the iPhone on Apple's top line will rise. This means any slowdown in iPhone sales could cause the stock to plunge.

A lot can change in a decade
Don't get me wrong -- the iPhone will likely remain in high demand for at least several more years, thanks to its unmatched appeal as a status symbol and untapped demand in emerging markets. But generational upgrades will plateau (as seen with the iPad), new competitors will enter the field, and a shiny new gadget could suddenly make the iPhone look dated.

Ten years ago, the Nokia (NYSE:NOK) 1110 was the best-selling phone in the world, with sales of 150 million units. However, Nokia missed the technological shift toward touch-based smartphones when the iPhone arrived in 2007, stubbornly stuck with the Symbian OS instead of Android, and finally sold its entire handset division to Microsoft (NASDAQ:MSFT). Ten years from now, the iPhone 6 could look as ancient as the Nokia 1110 does today.

While I'm not predicting a Nokia-like crash ahead for Apple, the company under CEO Tim Cook has arguably become an industry follower instead of an innovator. Many of the iPhone 6's "new" features -- larger screens, near-field communication supports, and widgets -- appeared over two years ago on Android devices. Apple Watch, the company's first new product under Cook, offers many of the same features found in Samsung's (NASDAQOTH: SSNLF) Gear devices.

No one expects Cook to match Steve Jobs' uncanny ability to launch devices that analysts scoffed at but the public loved, but a lack of truly new devices could eventually turn Apple into a top-heavy company completely dependent on the iPhone.

How Apple can diversify
Besides launching new products, Apple can diversify its top line in other ways. The first step would be to merge its iPad and Mac businesses with "productivity tablets" such as the long-rumored iPad Pro. Demand for Macs remains strong -- last quarter, Mac revenue improved 9% year over year as unit sales climbed 14%.

Microsoft has recently reported continuous growth in Surface sales, which topped $1 billion in its most recent quarter, indicating robust demand for two-in-one devices that "bridge the gap" between PCs and tablets. If Apple does the same by merging OS X with iOS 8 on hybrid devices, it could revive iPad sales by pinning them to rising Mac sales.

Apple is also well poised to boost its services revenue beyond iTunes and the App Store by expanding Apple Pay for mobile payments, HealthKit for fitness trackers and apps, and HomeKit for smart-homes. Although Mac and services revenue only accounted for a 15.7% of Apple's top line in the quarter, their continued growth could eventually offset a slowdown in iPhone sales.

Don't worry ... for now
As a long-term Apple investor, I'm thrilled with the record first-quarter numbers. But I'm also concerned about the company's long-term future. At some point, the iPhone could start an iPad-like decline, and I hope Apple's top line will be diversified enough when that happens.