Please ensure Javascript is enabled for purposes of website accessibility
Log In Help Join The Motley Fool
Free Article Join Over 1 Million Premium Members And Get More In-Depth Stock Guidance and Research
By Lee Samaha - Jan 30, 2015 at 10:17AM

Robert Half International's results and commentary suggest good times ahead.

The world's largest specialized staffing company, Robert Half International (RHI 1.43%), delivered a broadly positive set of fourth-quarter earnings on Thursday. In addition, management's commentary alluded to a tangible and positive shift in employment conditions. particularly in the U.S. As such, the company has entered the year in good shape, and the recent results contained many useful indicators of what its end markets could be like in 2015. Let's take a look at them in more detail.

On that note, CEO Max Messmer outlined his expectations for the company to continue benefiting from the trend toward corporations using temporary workers. For example, on the earnings call, he remarked that "in the United States alone, nearly 3 million people work on a temporary basis," adding that the share of total workforce taken by temporary workers was at an all-time high. This trend shows no sign of slowing. 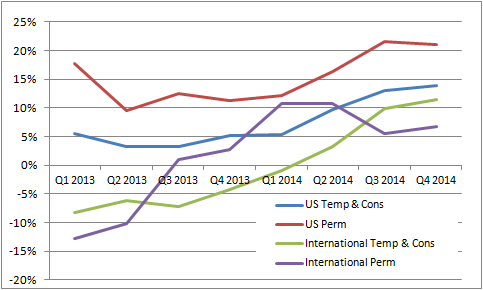 Source: Robert Half International presentations. Figures are for same billing days and at constant currency.

Skill shortages
There was good news in the report for U.S. job seekers, with Messmer saying, "the U.S. labor market had strengthened in recent months." Essentially, the moderate pace of economic recovery has held back permanent employment growth -- at least when compared to previous recoveries -- but there are signs the situation is starting to return to what Messmer called "classic" conditions.

The issue came up on the earnings call Thursday, with RBC Capital Markets analyst Gary Bisbee remarking, "Just looking back at the history, it seems like in the past few employment cycles, in the second half of the up cycle the perm business has frequently accelerated to maybe closer to twice the growth rate of the temp."

Readers can see in the chart above that Robert Half's U.S. permanent staffing segment revenue grew at 21% in the fourth quarter, compared to 14% growth for U.S. temporary and consultant staffing -- so not quite at the multiple suggested by Bisbee. However, Messmer gave some positive commentary in his reply:

Messmer added that he would invest "disproportionately in headcount in perm" in order to service the expected growth.

He also discussed the existence of skill shortages in accounting and information technology -- two areas of strength for Robert Half. The following chart shows the company's breakout of revenue. Accountemps, Robert Half Technology, and Robert Half Finance & Accounting accounted for more than 55% of Robert Half's revenue in 2015. 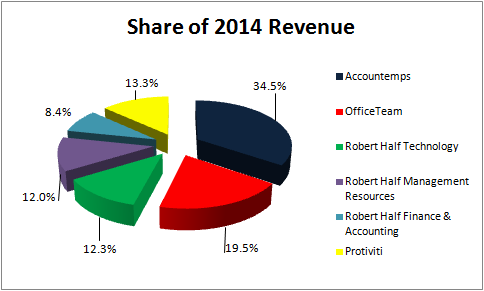 All told, Robert Half delivered a solid set of results, and provided the employment market grows in line with management expectations, the company could be set for a good year in 2015.

Lee Samaha has no position in any stocks mentioned. The Motley Fool recommends Robert Half International. Try any of our Foolish newsletter services free for 30 days. We Fools may not all hold the same opinions, but we all believe that considering a diverse range of insights makes us better investors. The Motley Fool has a disclosure policy.