Please ensure Javascript is enabled for purposes of website accessibility
Log In Help Join The Motley Fool
Free Article Join Over 1 Million Premium Members And Get More In-Depth Stock Guidance and Research
By Daniel B. Kline - Jan 31, 2015 at 11:22AM

Brands will spend $4.2 million per 30-second spot to be a part of the big game, and there appears to be no shortage of companies willing to do so.

While the cost of a 30-second prime time television commercial has fallen from peak levels, the price for Super Bowl ads has doubled since 2003.

Super Bowl ads have followed a different trajectory, climbing more or less steadily since 2003. In that year, a 30-second commercial during the big game cost $2.15 million. In 2015 that same ad will cost $4.2 million. That makes buying a Super Bowl ad the most expensive advertising choice a brand can make.

To put it in perspective, a 30-second spot during the Academy Awards ceremony is less than half that price, according to Statista.

Paying up for the Super Bowl is "a price that brands are willing to pay," according to the statistics site. "Last year, Super Bowl TV ad spend in the U.S. amounted to $332 million, as advertising time during the broadcast increased to 49 minutes." 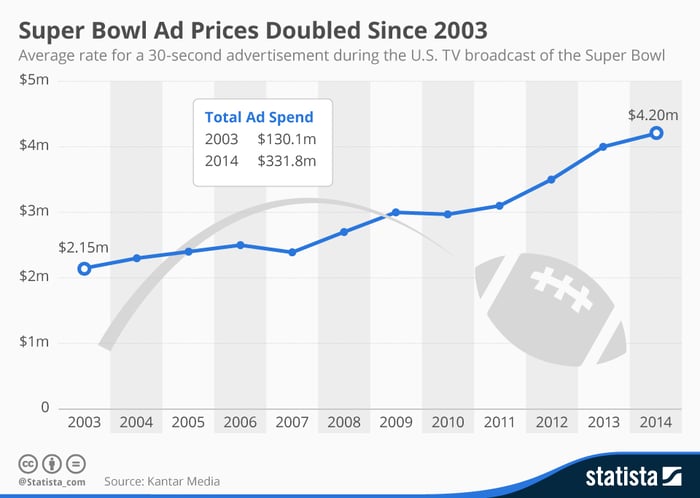 Why are brands willing to pay up?
While TV has become increasingly fragmented with expanded choices for viewers both on the cable dial and through digital services, including Netflix and Hulu, the Super Bowl has remained the biggest event on television. Last year, the game pulled in 111.5 million viewers, and if the game is competitive (which it was not in 2014 when the Seattle Seahawks blew out the Denver Broncos), the audience tunes in and sticks around for the ads. In 2013, only 0.7% of the audience changed channels during the commercials, according to Statista.

Not only was the Super Bowl the highest rated program of the 2013 to 2014 TV season, but it is also live programming that people generally watch in real time, not on DVR which makes skipping commercials easy. With the top rated non-sports prime time show The Big Bang Theory pulling in just under 20 million viewers an episode -- about 91.5 million less than the Super Bowl -- you can see why marketers are willing to spend big on the game.

After all, Super Bowl commercials, especially the really good ones -- and maybe the really bad ones -- are by no means limited to the game itself. Every major newspaper in the country runs stories about the ads, as do countless television shows and websites.

But how much is too much to pay for publicity? Advertising during the game can nab a company perhaps more than $4 million worth of publicity, but whether there is value in that depends upon whether a company can drive sales as a result of that spending.

"Advertising should make people buy products, or at least build purchase interest," wrote ad research firm, Communicus, in a study that examined whether the ads were worth it for brands. "Judged against this standard, four out of five Super Bowl XLVII commercials failed to deliver" for each of the past two Super Bowls.

The survey, which CBS News reported on, found that only one out of five Super Bowl commercials led consumers to buy a product or build purchase interest. It also discovered that four out of five marketers believed that Super Bowl ads are not worth it.

It can work
Communicus did find that some Super Bowl ads are effective. The most successful ones, according to the researcher, are ones for new or unfamiliar products.

"As advertisers like Anheuser-Busch, Mercedes-Benz, and Butterfinger have learned over the years with successful launches for new beer brands, car models, and confections, it's very possible to build awareness and purchase interest for a new product with a single Super Bowl exposure," Communicus wrote.

Success is also relative -- a number of advertisers last year "generated a lot of attention for their spots but didn't strengthen viewers' interest in buying the brand," the researcher reported. These included ads for M&M's, Cheerios, Oikos Yogurt, and two of the most talked-about spots that aired during the game, Budweiser's Puppy Love and Coca-Cola's It's Beautiful.

It's hard to say that Coke or Budweiser need more brand awareness without a corresponding uptick in sales, but there might be some benefit for lesser brands to raise their consumer awareness. However, it can be a big gamble to expect that effect to last until a customer is looking for some Greek yogurt, a car, or a soft drink.

Game on
Tim Calkins, a marketing professor at the Northwestern University Kellogg School of Management, told Advertising Age that brands see value in the ads even if they don't directly make financial sense.

"The reason advertisers are on the game is because it supercharges their brand," he said. "It's just very hard to tie the [sales] numbers specifically back to that media buy."

The rising prices suggest that there are enough brands interested in the spots that they either work or fail in a way that's still valuable. In addition, the fact that brands such as Coke, Budweiser, and PepsiCo return year after year suggests that there's a value to being part of the big game that goes beyond pure dollars.

Daniel Kline has no position in any stocks mentioned. Go Patriots!