McDonald's(NYSE:MCD) added insult to injury on Friday with its fourth quarter earnings report. The fast food giant made it official -- 2014 was its first year of declining sales in three decades with comparable sales falling 1% globally. CEO Don Thompson made no bones about the situation, calling it a "challenging year" and cited unforeseen events and a weak operating performance.

As McDonald's struggles and fast casual restaurants like Chipotle have taken off, the financial media seems to have written the obituary on the legacy fast food chains. But as the Golden Arches flounders, at least one of the old-school burger slingers is heating up.

Wendy's(NASDAQ:WEN) stock is on a surprising tear this year, up over 15% year-to-date and about 30% in the last three months, hitting post-recession highs. The chain has benefited from several analyst upgrades as its revamped stores and improved product offerings seem to be paying off.

Hot off the grill
Wendy's game plan for getting back into investors' good graces is a familiar one. The burger chain has sold off company-owned locations to franchisees to increase cash flow, modernized its restaurants, and improved the quality of its food.

As a result of the various upgrades and improvements, same-store sales have increased and profits have soared, along with the stock price. 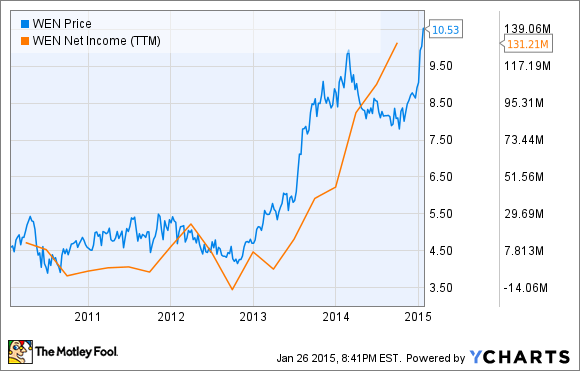 According to data from S&P Capital IQ, Wendy's has brought in profits of $131 million over the last four quarters, up from nearly breakeven just two years ago.

The real difference between McDonald's and Wendy's
Performance alone doesn't fully explain why Wendy's stock is popping and McDonald's is flopping. Yes, Wendy's recent same-store sales have been positive while the Golden Arches have been negative, but the key difference for investors is the market's expectations.

Though both companies seem similar being burger chains, they are really in different leagues. McDonald's has a market value of close to $90 billion and net income near $5 billion in 2014, while Wendy's market value is still less than $4 billion and profits just broke $100 million.

That difference in size and profitability leads to different expectations. McDonald's has historically been the gold standard in the fast food industry, while Wendy's has been a problem child over the years, suffering misguided mergers with Tim Horton's and Arby's. McDonald's is also a Dividend Aristocrat with a 3.8% yield, and investors expect to see that grow.

This is a problem for McDonald's investors though. McDonald's is a huge, mature company, and tastes are changing to its disadvantage. Like Coca-Cola, the company's strength lies in the products its best known for, burgers and fries. For the chain to completely reinvent itself as a healthier option seems unrealistic, but it can certainly make adjustments.

2015 should be a better year than last for McDonald's. The food safety scandal in Asia is fading into the rearview mirror, and edits to the menu and the rollout of the Create Your Taste program should help. However, the stock is unlikely to see the bump that Wendy's has recently. That company had to fall much further before bouncing back.