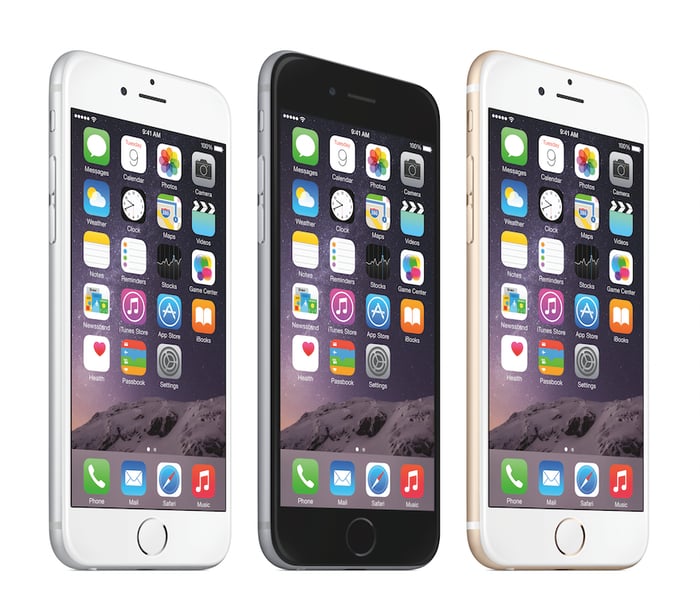 Apple (NASDAQ:AAPL) delivered a blowout earnings report for the holiday quarter. The company is so massive, and its financial performance is so impressive, that many of the numbers it reported on Tuesday are truly mind-blowing. Let's focus on three crucial figures and what they mean for investors in Apple stock going forward.

74.5 million iPhone devices sold during the quarter
What Apple is doing with the iPhone is out of this world: 74.5 million iPhones in a quarter equates to rougly 827,778 devices per day, or 34,991 per hour, assuming the shop is open 24 hours a day. Just for fun, that's 575 iPhones sold per minute, or 10 devices per second, during the last quarter.

The year-over-year increase in unit sales was 46%, while iPhone revenues in U.S. dollars jumped by an even bigger 57%, reaching $51.2 billion. Importantly, Apple delivered a $50 increase in the average selling price in the iPhone segment, to $687 per unit.

Rising iPhone prices are quite an exceptional achievement in times when most competitors are aggressively cutting prices to sustain market share. Based on data from the Consumer Electronics Association, average smartphone prices have declined from $440 in 2010 to an estimated average price of $275 in 2015.

That Apple can deliver both massive sales volume and rising prices in the context of rapidly declining industry prices speaks wonders about Apple's competitive differentiation and the booming popularity of its new iPhone 6 and 6 Plus models.

The iPhone brought in almost 69% of total revenues during the quarter, and an even bigger share of the company's profits, so the main driver behind Apple's blockbuster quarter was clearly the iPhone. Since the iPhone 6 and 6 Plus are selling like hotcakes, the company is being enormously benefited by its heavy dependence on this segment.

On a long-term basis, however, it would be nice to see growing diversification as the company expands into new products and services, such as Apple Watch and Apple Pay. Markets saturate over time, so sooner or later growth in the iPhone division will slow down as the industry matures. A wider and more diversified product portfolio for Apple would substantially reduce the risks for investors in the long term.

$178 billion in cash and liquid investments
Apple's cash hoard is truly overwhelming. To put the numbers in perspective, the company has enough cash in the bank to purchase any of 480 of the 500 companies on the S&P 500 index. Purchasing both Amazon.com and Netflix at current market prices would require something in the area of $169 billion, which would be within Apple's means.

Such an outlandish transaction would instantaneously make Apple both the world's leading online retailer and the undisputed global king in online video streaming. However, Apple isn't prone to making big acquisitions, so these kinds of speculations are purely theoretical. Nevertheless, it's good to know that the company enjoys enormous flexibility to make all kinds of deals and acquisitions.

Apple is spending tons of money on dividends and buybacks, and its gargantuan cash balance is quite reassuring when it comes to evaluating its ability to continue distributing cash to investors. Apple produced $30.5 billion in free cash flow during the last quarter, and it allocated $2.8 billion to dividends and $5 billion to buybacks during the period, according to S&P Capital IQ data.

Considering that Apple is generating tons of cash flows on a recurrent basis, and that it's sitting on a mountain of money in its balance sheet, investors in Apple stock have strong reasons to expect growing cash distributions from the company in the years ahead.

70% growth in China sales
Sales in the Greater China region, which includes China, Hong Kong, and Taiwan, grew 70% year over year to $16.1 billion in the quarter. China has become Apple's second-biggest market, accounting for a big 21.6% of total revenues during the the last quarter, so this dynamic market is a major growth driver for the company.

Apple and China Mobile started discussing a deal in 2008, and CEO Tim Cook played a big role in those negotiations, so Apple's performance in China during the last quarter was a major victory for Cook, who sounded remarkably optimistic about the company's potential in China during the conference call:

I'm very proud of how we're doing. I was there right after the launch in October. And the excitement around the iPhone 6, iPhone 6 Plus was absolutely phenomenal. And you can see that in the results with Mainland China being up 100% year on year, despite not having a full quarter of sales since we launched in the second half of October.

Apple's numbers during the last quarter were nothing short of amazing, and the figures related to iPhone sales, cash balances, and China demand are particularly promising for investors in Apple stock in the years ahead.