The oil market is awful right now. That was on display when ConocoPhillips (NYSE:COP) reported plummeting profits in its fourth-quarter results. However, management is taking action to protect investors in the near term while also setting the company up for long-term success. Executives made this evident in comments on the company's fourth-quarter conference call.

Protecting the dividend is the No. 1 priority
I lost count of the number of times executives repeated the phrase the "dividend remains our top priority," which was first said by CEO Ryan Lance in his opening comments. Suffice it to say, the company left no doubt the payout would not be a casualty of lower oil prices.

Focused on becoming cash flow neutral
Management also said repeatedly it is focused on making ConocoPhillips cash flow neutral by 2017. In fact, Lance placed it as the No. 2 priority behind sustaining the dividend. As the following slide illustrates, the company has a way to go: In 2014, it outspent cash flow plus asset sales by $1.4 billion, requiring it to take on some additional debt. 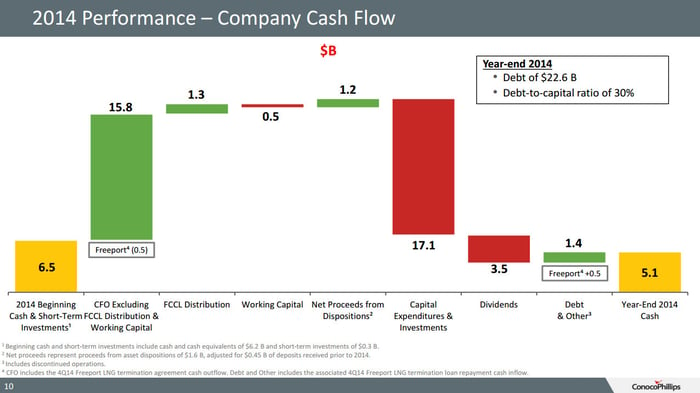 The plan is to get its capital expenditures and investments plus dividends to equal cash flow from operations. However, this isn't as wide a gap as it might appear as the company has several major projects wrapping up. As these projects come online and production from them ramp up, cash flow should increase as long as commodity prices behave.

Taking action
The company does not intend to sit back and wait for oil prices to recover. Instead, it is taking action now to ensure it can meet its dividend and cash flow priorities. It has decided to lower its capital budget again and now plans to spend just $11.5 billion this year. Lance commented on the additional cut to capex by saying:

In making these cuts, we're exercising flexibility we've built over the past few years, coring up the portfolio, adding scalable, unconventional inventory with a low cost to supply, and executing the vast majority of our major project spending, and that's why we can adjust our capital program while preserving future investment opportunities. And in 2016, you'll see more capital flexibility as additional major project spending continues to roll off. At our revised capital level, we still expect to deliver 2% to 3% growth in 2015 versus 2014.

Strong balance sheet it is prepared to use
The company also plans to use its strong balance sheet to ensure it meets its two priorities. ConocoPhillips management made clear it is not afraid to take on additional debt to fund the balance of its major projects. As CFO Jeff Sheets stated:

[...] We will also be using our strong balance sheet capacity, both cash balances and increased borrowings to provide funding this year and next. ... We have ready access to the credit markets and our debt continues to trade at levels between those of A and double-A rated companies. The chart on the right [see slide below] shows indicative borrowing rates for any new issuances in today's markets. ... As we assess commodity price environments both in 2015 and for the next few years, we think it's unlikely that we'll need to increase our debt to a level that would cause our credit ratings to slip out of the single-A credit rating range, although it could move lower within the A range if we stay at current commodity price environments for a prolonged period. Our current debt-to-capital ratio is about 30%. We're willing to let that rise, if necessary, as we move the Company to a balance of cash flows, capital expenditures and dividends in 2017. 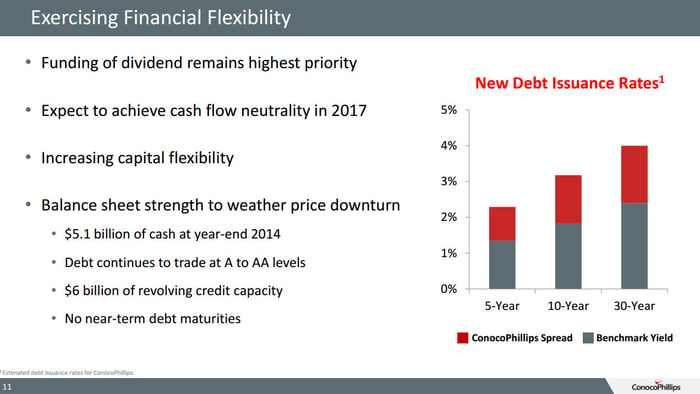 Focused on the long term
In closing the company's prepared comments on the call, Lance reminded investors that the company is focused on creating long-term value.

Now, some things might change, but here's what's not going to change. We're going to allocate capital prudently, we'll continue to migrate our portfolio to a lower cost of supply, we'll maintain capital and financial flexibility, and we'll pay our shareholders first. That's our formula for creating long-term shareholder value.

ConocoPhillips' emphasis here starts with what it views as a long-term relationship with its shareholders. That's why it refuses to part with its dividend, and instead sees that as the first check out the door. This view has been lacking in the energy industry as companies have been quick to reduce, or in some cases eliminate, investor payouts as the oil market soured over the past few months.

Investor takeaway
ConocoPhillips plans to put its investors first, which is why their payout income will not dry up. Instead, the company will focus on keeping costs low and maintain its plan to create value. It sees that game plan yielding a big win over the long term.