What happens when one of the stock market's longest-running dividends meets unprecedented foreign currency moves against the U.S. dollar? The answer isn't pretty for a global giant like Procter & Gamble (NYSE:PG) - a company that earns most of its income from international markets.

This will be P&G's 124th consecutive year of sending out dividend checks. Shareholders have every reason to expect clockwork-like raises on that historic dividend. In fact, P&G has boosted its payout in each of the last 58 years, easily qualifying the consumer goods giant as a Dividend Aristocrat. However, despite the companies' storied history, might its dividend finally be in danger?

Spiking payout ratio
But over the last few quarters that dividend has eaten up an alarmingly high percentage of profits. P&G spent $3.6 billion on dividend payments in the last six months of 2014 even as operating earnings only hit $4.4 billion. Combining those two stats yields a dividend payout that has jumped to an incredible 83% of earnings recently (versus the market average of roughly 50%).

While the trailing 12-month picture looks a little better for P&G, the payout ratio is still above 75% on that basis. Compare that to another retailing giant, Wal-Mart, whose payout is comfortably below half of its operating profit. 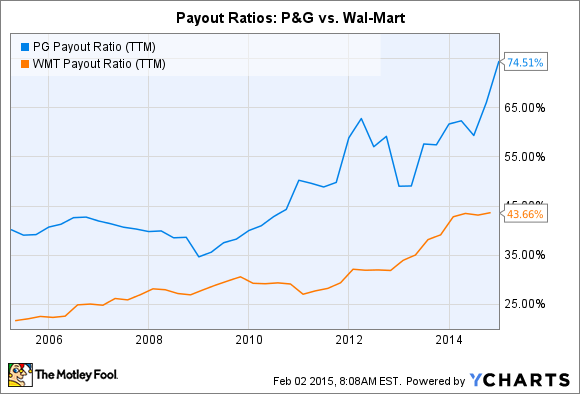 What's going on?
The main reason for that spike is foreign exchange swings. A few major currencies logged massive devaluations against the U.S. dollar last year. That hits P&G particularly hard since the company has to move billions of dollars of materials across borders as part of its production process. The Russian ruble, to name just one example, fell by 54% in the fourth quarter, costing P&G hundreds of millions in profit.  Altogether, foreign exchange swings turned what would have been a 6% earnings gain last quarter into the 8% drop P&G actually reported.

Management can't do much about currency values, but it can raise prices in response to the jumping input costs. That's just what P&G plans to do in the second half of this fiscal year. Executives are targeting ending fiscal 2015 at roughly the same level of profit that P&G booked in the prior year.

Two better metrics to watch
Given the tricks currencies are currently playing on P&G's books, dividend investors are better off focusing on two other metrics to judge the strength of their payout: organic sales and cash flow.

Organic sales growth has been steady at 2% in each of the last three quarters. That is about half the pace P&G managed in 2011, a strong growth year. And almost none of the gains came from volume improvements: P&G last quarter booked flat or declining volume in all but one of its product divisions. However, at least demand is holding steady, even if organic sales growth is stubbornly slow.

Cash generation, on the other hand, is undeniably strong. P&G's operating cash flow over the last six months was $7 billion, or 32% above the prior year. That growth comes from cost reductions and efficiency improvements in the company's supply chain. As a result of that growing cash productivity, P&G has been able to continue spending heavily on share repurchases. Management has sent $2 billion in cash per quarter back to shareholders via that channel.

That healthy cash flow illustrates why P&G's dividend is in no real danger of pausing for the first time in 60 years, even if the spiking payout ratio suggests otherwise. The company boosted its dividend by 7% in each of the last two years, and I'd expect a similar increase in April.