Netflix's (NASDAQ:NFLX) fourth-quarter results capped a fantastic year for its business. Here are a few financial highlights from the streaming video giant's 2014 performance:

Given those results, investors might wonder why Netflix just announced that it needs to take out its biggest loan yet. Specifically, the company plans to tap credit markets for $1.5 billion of new debt.

Growing debt burden
The move will more than double Netflix's debt load, which sat at $900 million at the end of 2014. By comparison, Netflix has $1.6 billion of cash and equivalents on the books.

Management has gotten into the habit of taking on new debt in a single issue each year: Netflix borrowed $500 million in January 2013 and $400 million in February 2014.

The debt isn't coming cheap, either. The past two borrowings carried interest rates of almost 6%, and this year's is just as expensive. Credit ratings firms aren't jazzed about Netflix's rising debt burden. Moody's, for example, recently downgraded the company's credit rating on account of the negative free cash flow trends anticipated over the next few years. 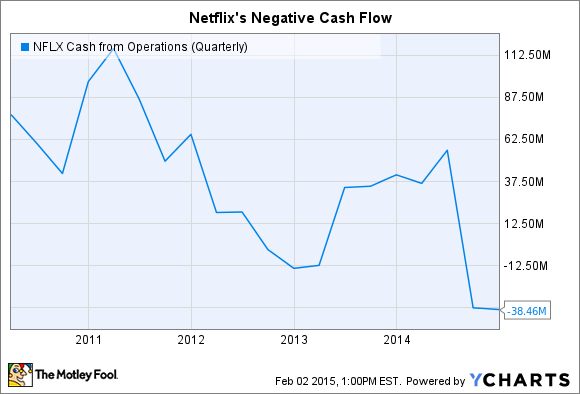 The calculated gamble
Investors can thank Netflix's growing bet on original series for that drop. Shows such as Marco Polo and House of Cards require more up-front cash, and so they can't be financed completely through earnings. Meanwhile, management is directing most excess profit toward its international expansion plans.

Still, CEO Reed Hastings sounds confident that original content is worth the risk of a bigger debt burden  -- because it pays quick dividends. "Our originals cost us less money, relative to our viewing metrics, than most of our licensed content," he explained in last month's shareholder letter. That's a big reason why Netflix plans to triple its output of original content this year to over 300 hours. The cash pinch from that ramp up should start materializing in next quarter's results.

There are other benefits to owning a portfolio of original content. Originals make Netflix's marketing more effective, which boosts new subscriber figures in the quarters in which they launch. Popular shows such as Orange Is the New Black also tend to raise the value of the Netflix brand in the eyes of consumers. That should make future subscription price increases go down relatively smoothly with members.

Maybe not the last time
This year's $1.5 billion debt raise might not be Netflix's last, given that management just sped up its global expansion plans. The company now expects to cover 200 countries by the end of 2016 without needing to post operating losses. "We then intend to generate material global profits from 2017 onwards," management said last month.

Netflix could stay profitable while using its U.S. earnings to fund that international expansion. Or it could make a bigger bet on original content and stay in the black. But it can't do both.

The good news for shareholders is that Netflix has two major opportunities ahead that have the potential to create a much stronger business by 2017. However, the only way to fund both of them simultaneously is by taking on significantly more debt.