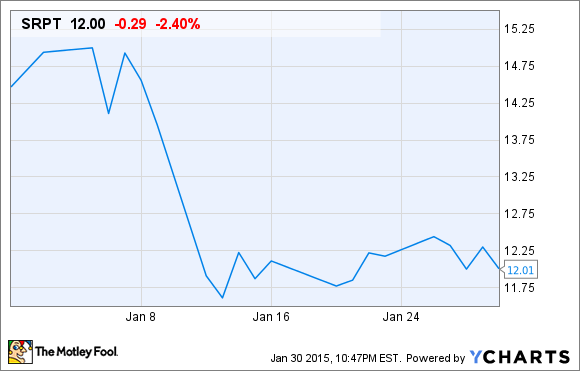 What: Shares of Sarepta Therapeutics (NASDAQ:SRPT), a clinical-stage biopharmaceutical company primarily focused on developing therapies to treat Duchenne muscular dystrophy, crashed 17% in January per data from S&P Capital IQ after announcing its 168-week results from its phase 2b extension trial with eteplirsen.

So what: According to the company's press release, at week 168 patients in its modified intent-to-treat arm experienced a six-minute walk test (6MWT) decline of 76.7 meters, or 19.5% since baseline more than three years prior. This translated into a statistically significant clinical benefit of 65.4 meters over the treatment-delayed group of DMD patients. Per Sarepta, this cohort, following a 68.4-meter decline between baseline and week 36, has experienced a 73-meter decline in the 6MWT between weeks 36 and 168. The reason Wall Street and investors pounced on Sarepta in January relates to the steep drop-off in 6MWT results experienced over the past 48 weeks in the intent-to-treat group. At week 120 patients had experienced a decline of just 13.9 meters from baseline. By week 144 this figure grew to 33.2 meters, and now at week 168 it's ballooned to 76.7 meters. Sarepta reminded investors in the release that many of its DMD patients have had the disease for nine years, so it was already well-progressed when treatment with eteplirsen was begun.

Sarepta remains on track to file a new drug application for eteplirsen by mid-2015.

Now what: Sarepta is the type of stock that makes you want to pull your hair out! Its management team has been a bumbling mess with its misinterpretations of letters from the Food and Drug Administration, resulting in what's been a delayed new drug application filing.

Additionally, its biggest competitor, Prosensa, had its phase 3 DMD drug drisapersen fail to meet its primary endpoint in a larger study after delivering solid results in a midstage study. This failure has the FDA skeptical of what exon-skipping may actually do to improve DMD patients' outcomes.

In my opinion, I believe the therapy does work based on its results – at least better than what options are currently available. The question is whether or not eteplirsen works better if it's administered at a younger age when DMD is first diagnosed? We really don't know the answer to that question yet, but I think that's what could hold the approval or rejection of this drug in balance with the FDA.

If approved eteplirsen will have a clear path to about 13% of all DMD patients. This may not be enough to get Sarepta to profitability, but it should put the company on the radars of acquisition-hungry pharmaceutical companies. I guess you could say I'm cautiously optimistic that eteplirsen will be approved, but we likely won't know whether that becomes a reality until early 2016.