Stratasys (NASDAQ:SSYS) shares traded significantly lower yesterday after it surprised investors on Monday evening by releasing its preliminary full-year 2014 results and 2015 guidance -- both of which disappointed Wall Street expectations. The 3D printing giant also announced that it will be taking a significant goodwill impairment charge for its MakerBot acquisition against its fourth-quarter earnings, and will be increasing its capital expenditures in the coming years to invest in new growth initiatives. Given these developments, should investors be worried about Stratasys' stock crash? 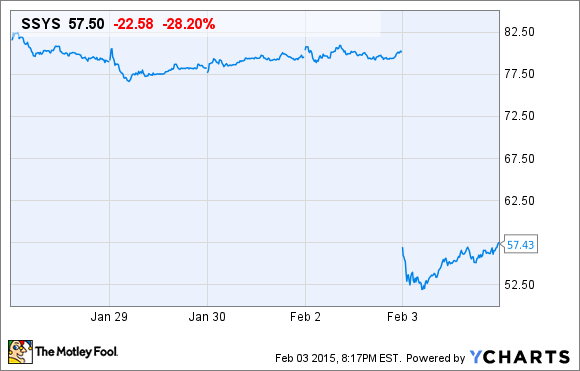 Breaking down the disappointment

The reason for the slowdown is that Stratasys experienced challenges with introducing and scaling its fifth-generation MakerBot Replicator 3D printing platform and its rapidly evolving distribution model that relies more heavily on a reseller partner network than in previous years. Stratasys ultimately expects MakerBot's fourth-quarter headwinds will be resolved in the coming year and the unit's growth rate will ramp up to, or exceed, overall company averages by 2016.

A big issue raised
While MakerBot's longer-term outlook does offer something positive to look forward to, investors shouldn't gloss over the fact that Stratasys will be taking a $100 million to $110 million non-cash goodwill impairment charge against its fourth-quarter earnings. For reference, Stratasys purchased MakerBot for $403 million in stock in mid-2013, with the potential to pay an additional $201 million in performance-based earn-outs if the unit hit specific financial targets through the end of 2014.

By definition, goodwill represents the premium a company pays for an asset beyond its verifiable value, and that excess cost is carried on the balance sheet. Each year, a company that's acquired goodwill must test it for impairment, and if the company determines the goodwill to be less valuable than what it's being carried for on the balance sheet, it has to take an impairment charge against its earnings. Although goodwill is a non-cash charge against earnings that doesn't affect the direct financial position of a company, it suggests that management may have overpaid for an asset, or that management couldn't realize an asset's full potential. Ultimately, a history of goodwill impairments can raise questions about a management team's ability to derive long-term value for shareholders from acquisitions.

Looking at the bigger picture, Stratasys has accumulated significant goodwill from the major acquisitions it has conducted in recent years -- during a period when 3D printing companies were trading at historically rich valuations on public markets: 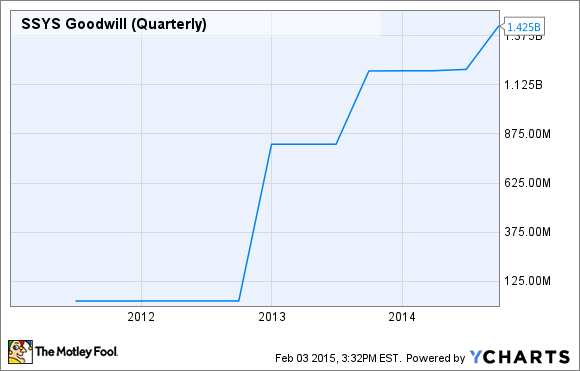 To be clear, Stratasys isn't destined to experience future goodwill impairments simply because it's amassed significant goodwill. The assets tied to Stratasys' goodwill would first have to fail management's impairment tests by underperforming their expectations.

Should investors be worried?
Despite the negativity surrounding Stratasys' revised guidance and its partial writedown of MakerBot, the company is still forecasting that its 2015 revenues will grow by about 26% to 28% over its 2014 expected revenues, translating to an adjusted earnings-per-share growth of 5% to 10%. It also has implemented a new investment plan that calls for increasing operating expenses by 2% of anticipated revenues for each of the upcoming two or three years to build a company -- in terms of products and infrastructure -- that can support $3 billion in revenue by 2020. In other words, Stratasys' management remains committed to investing in the long-term success of its business instead of shorter-term operating results -- which, if successful, could be meaningful for long-term investors.

So should investors be worried about Stratasys' recent stock crash? I think it boils down to whether you have confidence in management's ability to create long-term value for its shareholders. If one-time impairment charges increase in frequency, it could substantiate that management isn't creating compelling long-term value for shareholders from acquisitions, which there have been many of in recent years.

Although I found the MakerBot writedown disappointing, because it raises questions about management's competency in making acquisitions, the rest of Stratasys' business appears to be performing well enough to support an infrequent writedown, likely because the majority of its business isn't consumer-focused, an area that's struggled to find traction across the industry. Ultimately, there are still many positive reasons to get excited about Stratasys' future, as long as investors are patient and willing to monitor any material changes that come their way.