Disney (NYSE:DIS) on Tuesday announced record quarterly earnings results to close out calendar year 2014. The stock jumped a quick 8% today on the news.

While nice to see, an 8% bounce doesn't mean much to long-term investors. Shareholders are expecting much bigger gains from The House of Mouse over the next several years. But here are five numbers from the announcement that should keep investors cheering.

$1.27 per share
Trouncing Wall Street expectations, Disney posted a 23% profit jump over the prior year to earn $1.27 per share. The pros were looking for just a 3% gain, to what would have been a still-record $1.07 per share.

The profit difference can't be explained by one-time events or by an unusually strong showing in just one of its business lines, either. Each of Disney's divisions, media and networks, parks and resorts, studio, consumer products, and interactive, chipped in to this quarter's surprisingly high profit haul.

$1.4 billion of revenue
The standout winner was the consumer products unit, though, which logged a 22% sales jump to hit $1.4 billion in revenue. We knew that "Frozen"-themed merchandise was going to make a big splash for Disney this past season, but we didn't know the true scope of that opportunity until now.

Disney earned a whopping 46% more income from its product sales this quarter. That success pushed the unit's profit margin higher by 7 percentage points to 45% of sales, almost double the profitability of the ESPN-fueled media networks business. This quarter's growth was enough to make consumer products Disney's most efficient division, by far.

$11 billion franchises
And thanks to newcomers "Frozen" and "Avengers," Disney now has 11 brands that are responsible for over $1 billion in annual retail revenue -- each. The list also includes Pooh, Disney Junior, Spider-Man, Monsters, Cars, Mickey and Minnie, Princess, and Star Wars.

Meanwhile, Disney's movie calendar should keep the registers ringing all year. On tap for 2015 is a Cinderella film, two Pixar movies, and a Star Wars release that will ramp up its promotion just in time for the next holiday shopping season.

55% higher cash flow
Disney's free cash flow jumped to $857 million this quarter, or 55% above last year's result. And that's after accounting for the additional $340 million Disney invested in its business. The company spent $1 billion on capital expenses, including pre-opening costs for the new Shanghai resort. 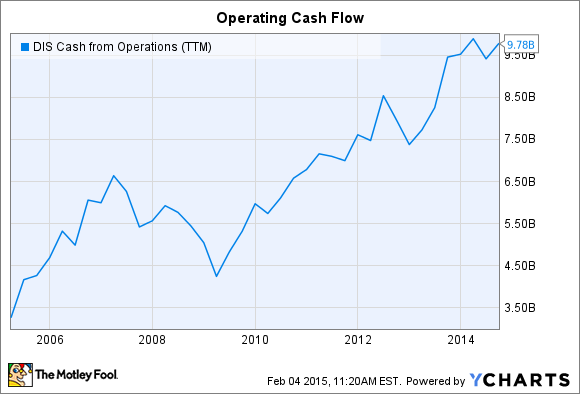 But Disney still managed to deliver a huge increase in free cash, which made it easy for management to afford this year's 34% dividend hike. Investors can expect increasing cash returns like that as long as Disney's cash production keeps pointing higher.

2016 is the new 2015
The new resort in Shanghai is scheduled to open in the spring of 2016. While that's a slight delay from the original plan, it promises to be well worth the wait. Here's how CEO Bob Iger described the progress, and the good reason for the delay, in Tuesday's conference call with analysts:

I was in China the week before last and saw amazing progress -- we just topped off our signature Shanghai Disneyland Hotel... and we're nearing completion on iconic features throughout the park, including the largest castle we've ever built... and we're getting ready to start casting the hundreds of performers we'll need to entertain our guests. It's thrilling to see Shanghai Disney Resort rapidly coming to life. The artistry, complexity... the magnitude... and the detail... it's all quite astonishing.

As you'll recall, after we broke ground on this incredible resort, we announced an $800 million expansion, significantly increasing both the size of the park and the number of attractions available to our guests on opening day. Even with that expansion, we will complete major construction by the end of this calendar year, and we're planning a spectacular grand opening in Spring of 2016, which we believe is the optimal time to showcase the full grandeur of this world class destination.