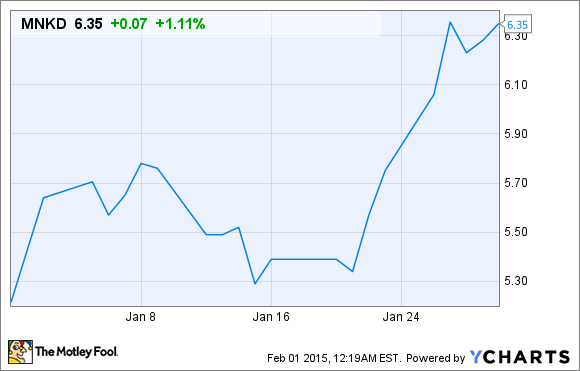 What: Shares of MannKind (NASDAQ:MNKD), a biopharmaceutical company primarily focused on developing therapies to treat diabetes, vaulted higher by 22% in January per, S&P Capital IQ, after announcing the receipt of a milestone payment from partner Sanofi and in preparation for the launch of Afrezza,

So what: In early January, MannKind announced in a press release that it had received a $50 million milestone payment related to meeting specific manufacturing milestones as outlined in its licensing agreement with Sanofi. Remember, in addition to receiving $150 million in upfront payments, MannKind is eligible to receive up to $725 million more for hitting certain development, regulatory, and milestone targets.

Also, investors are getting excited about the upcoming launch of Afrezza, the company's inhaled type 1 and type 2 diabetes medication. Afrezza gives most diabetics a genuine choice over injections and was also shown in clinical studies to work exceptionally fast and leave the body sooner than other options, which is critical to avoiding bouts of hypoglycemia.

Lastly, Alfred Mann announced he was retiring as CEO of the company and moving into an Executive Chairman's role. The press release notes that Hakan Edstrom, the current president, will step into the CEO role moving forward. Investors may view this transition as a positive since Mann's presence was associated with years of ongoing losses as CEO.

Now what: When it comes to volatility, MannKind never seems to disappoint on a month-to-month basis.

On one hand, there are catalysts that could push the stock even higher. Having plenty of cash in its coffers means investors can transition from worrying about MannKind's cash burn and instead prepare to realize recurring revenue. Having Sanofi as a partner will certainly help as it has a pretty good track record when it comes to drug launches.

On the flipside, MannKind is already richly valued considering that it'll be getting just 31.5% of Afrezza's total sales out of the gate. We also have no clue how successful Afrezza will be immediately following its launch. On paper, the drug looks as if it makes sense from a convenience factor, but will physicians prescribe it and consumers pay for it? More than a handful of drugs have been derailed by poor launches when they otherwise looked as if they'd perform well prior to their actual launch.

Personally, I tend to fall into the latter camp of "prove it first." Seeing Alfred Mann step down prior to launch and having Sanofi's CEO pushed out just months ago lends an odd vibe to this launch. Until we have a few quarters of sales data under our belt, I'd suggest sticking to the sidelines.