A year ago, professional social networker LinkedIn (NYSE:LNKD.DL) was in the midst of a brutal pullback that would end up shaving off nearly half of its value from the peak. Shares had briefly touched $257 in September 2013, only to dip to $136 by May 2014.

A few lackluster earnings reports with soft guidance made investors question the company's true potential, leading to the pullback when combined with its premium valuation metrics.

Well, that's all behind us now. LinkedIn's recovery was already well under way, and thanks to a blockbuster quarter, shares have now soared to fresh all-time highs.

The headliners
Fourth quarter revenue jumped 44% to $643 million. That translated into a similarly strong growth for the full year: 2014 sales grew 45% to $2.2 billion. Adjusted earnings per share for the quarter came in at $0.61. Both top and bottom lines easily crushed the Street's expectations of $617 million in revenue and $0.53 per share in adjusted profit. 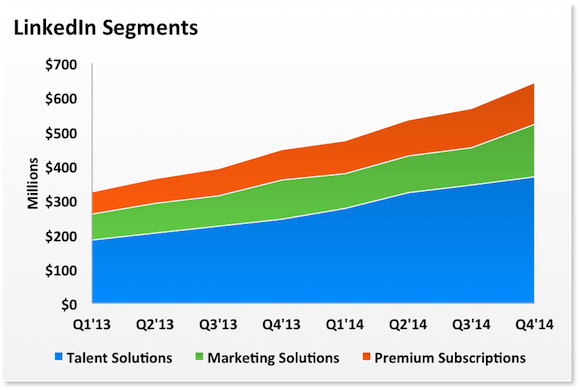 The overall mix of LinkedIn's three operating segments was in line with historical trends, with 57% of sales coming from the talent solutions business. Premium subscriptions accounted for 19% of revenue, while marketing solutions brought in the remaining 24%. All three segments are growing very nicely as evidence that many of LinkedIn's recent strategic initiatives are playing out exactly as hoped.

Digging deeper behind the scenes
Thanks to the acquisition of Bright, which was announced exactly a year ago, LinkedIn currently has 3 million active job listings on its platform, a 10-fold increase from a year ago. The publishing platform continues to grow as well, recently reaching its millionth post. These posts are important to LinkedIn's content and advertising strategy, as members create original content that boost engagement and LinkedIn is subsequently able to monetize.

The decision to formally enter China, which was also announced about a year ago, is also paying off. When Linkedin only operated its English version of its service, it already had 4 million Chinese members. That figure has now doubled to over 8 million members following the launch of localized versions in Simplified Chinese and Traditional Chinese.

Engagement is also on the rise. Last summer, LinkedIn changed its reporting methods for its userbase, transitioning toward internally measured metrics. Unique visiting members (which are essentially monthly active users) now stands at 93 million, and total registered members have jumped to 347 million.

Sponsored Updates continue to ramp, now comprising about a third of marketing solutions revenue. That's steady progress for a product that didn't exist 6 quarters ago. On a trailing-12-month basis, Sponsored Updates is now a nearly $140 million business. That may not stack up to Facebook's mobile results, but it doesn't have to.

The revamped Sales Navigator is also ramping very well, comprising roughly 25% of premium subscriptions revenue during the quarter. LinkedIn's own sales force is very effective, and its field sales channel is really driving this product. Field sales generated 64% of all revenue this quarter, which is a higher mix than normal.

Hey, big spender
Make no mistake, LinkedIn is still very much in growth mode and continues to invest in its future. Capital spending more than doubled sequentially this quarter to over $240 million. For the full year, capital expenditures were up 97% to almost $550 million. This not only includes the data center strategy that LinkedIn embarked upon in 2013, but also some property purchases that LinkedIn completed during the latter half of the year. If it weren't for these property purchases, 2014 free cash flow would have been $200 million.

As far as its data center strategy goes, LinkedIn plans on launching its third self-managed data center later this year to strengthen its international services, and may even build a fourth.

Where does LinkedIn go from here
LinkedIn's guidance calls for first quarter revenue of $618 million to $622 million, which is actually below expectations. Full-year 2015 revenue guidance is right on target with analyst models, and is expected between $2.93 billion and $2.95 billion. But LinkedIn is forecasting full-year adjusted earnings per share of $2.95, which is much more profitable than the Street was expecting.

Following such a strong quarter, analysts are rushing to boost price targets and many have set price targets in excess of $300. Following a lackluster 2014 where shares lagged the broader market, LinkedIn is kicking off 2015 with a bang.