IBM (NYSE:IBM) has been taking a beating lately. Shares have tumbled over 15% in the past six months, and criticism has rained down on the company from seemingly every direction. Stagnant revenue and a heavy reliance on share buybacks to drive earnings growth has led some to conclude IBM is falling behind, unable to adapt to a changing world and dependent on financial engineering to grow.

There are plenty of arguments being made against IBM these days -- here is why three common ones are wrong.

No. 1: IBM does not invest enough in its business

A common argument is that IBM is returning billions of dollars to shareholders through share buybacks and dividends when it should be investing to grow the business.

From fiscal 2009 through 2013, IBM spent $63.7 billion on stock repurchases and paid out $17.3 billion in dividends. During that same period, the company spent $21.2 billion on capital expenditures and $14.3 billion on acquisitions.

IBM does not return so much money to shareholders, because it is reluctant to invest. The company simply generates far more operating cash flow (roughly $97 billion from 2009 to 2013) than it could possibly put back into its business at a reasonable rate of return, and the result is that much of this cash flow is returned to shareholders.

IBM does not seek to grow revenue at all costs, spending billions on questionable acquisitions and initiatives. It could have made some massive purchases over the past five years, greatly boosting revenue. But the return on investment would have almost certainly been abysmal.

Huge acquisitions often turn out poorly. Consider Hewlett-Packard, which spent $18.6 billion on such deals over the past five years. The result? Revenue is down 11.5% and net income has fallen a whopping 43% over that period. On top of that, HP was forced to take a massive $18 billion asset impairment charge in 2012 related to its failed acquisitions. IBM has largely avoided these types of disastrous transactions.

Investing the amount of money IBM earns each year is easy. The hard part is investing in places where the potential return on investment is exceptional. IBM invests plenty in its business. It is only the company's incredible success in growing its earnings over the past decade, giving it the ability to return billions to shareholders each year, that makes it appear otherwise.

No. 2: Earnings growth has been the result of financial engineering
Another criticism of IBM is that the massive amount of money spent on share buybacks has been the primary driver behind earnings growth over the last decade. It is true that buybacks have boosted earnings per share, but such a claim ignores IBM's margin expansion as it shifted its business model to more profitable segments.

Between the end of 2004 and the end of 2014, IBM reduced its share count from 1.7 billion to 995 million. This is a nearly 42% reduction, responsible for a big chunk of EPS growth over the last decade. Had net income remained at 2004 levels, EPS for the company would have grown by about 72% just from the buybacks.

But EPS has instead grown by 216% since 2004, thanks also to an 87% increase in net income, driven by a rise in both gross and operating margins. This is not financial engineering. IBM had plenty of cash flow to fund these buybacks, and it paid a reasonable price for its own shares. Here is what IBM's P/E ratio has been over the past decade. 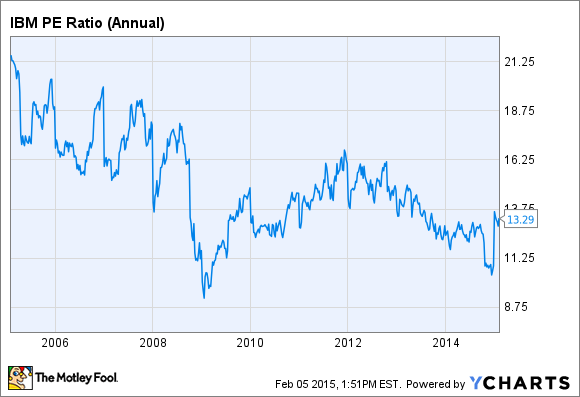 Particularly after the financial crisis, IBM got a good deal on its share repurchases, with a P/E ratio in the low-to-mid teens. Plowing cash into its stock made perfect sense. As long as IBM does not take on too much debt to pay for these buybacks, and as long as the share price remains reasonable, the company should be buying back as many shares as it can.

IBM has mostly paid for its massive buyback program with cash flow, as well as proceeds from selling off low-margin businesses, not debt. Buybacks have accelerated in recent years, and if IBM keeps up this pace, it might have to raise debt to pay for the program. But as it stands, the balance sheet is strong.

There is nothing wrong with repurchasing stock if the price is right, and there is money to pay for it. Both conditions have been true for IBM, and a depressed stock price means the company gets more for its money with each share. And the idea that IBM should spend less on its own shares and more on acquisitions is misguided. Its aversion to expensive purchases of hot tech companies, which often trade at many times sales with little or no profit, is a good quality. The day IBM adopts that kind of strategy is the day that I reconsider being an IBM shareholder.