Please ensure Javascript is enabled for purposes of website accessibility
Log In Help Join The Motley Fool
Free Article Join Over 1 Million Premium Members And Get More In-Depth Stock Guidance and Research
By Rich Smith – Feb 8, 2015 at 11:42AM

There's method in its madness, though -- and bad news for American defense contractors and oil companies alike.

Tumbling oil prices have grounded the Russian economy -- but not its fighter jets, or its defense budget. Photo source: Mika Stetsovski via Flickr.

Russia is in trouble.

According to its own Finance Ministry, the nation depends on revenue from crude oil and gas exports to fund 50% of its budget. But with the price of crude oil itself down nearly 50% over the past year, finding money to fund government programs is getting harder.

Result: Russian Finance Minister Anton Siluanov recently warned that crude oil prices of $50 per barrel (oil costs about $58 now, but has fallen as low as $46 in recent weeks) could siphon as much as $45 billion in revenue out of government coffers this year. This, Siluanov said, could necessitate budget cuts of as much as 10%. But there's one part of the Russian state budget that won't be cut at all: defense.

"Millions for [spending cuts], but not one cent for [defense budget cuts]"
Putting his own spin on Sen. Robert Goodloe Harper's famous quote, Russian President Vladimir Putin has declared that even if budgets must be cut in other areas, defense spending must remain sacrosanct. And in a sense, that makes sense. After all, there's a war on.

But what makes less sense -- at least initially -- is how Russia is spending its defense dollars. Not just on combat operations in Ukraine, but in places far to the north. As in, all the way north: the Arctic.

With Russian troops fighting (albeit unofficially) and dying in the cities and villages of eastern Ukraine, you might expect Putin to spend liberally on keeping his forces well armed and equipped. But as it turns out, billions of dollars of Russian military spending are being diverted to build new surface warships, submarines, and even nuclear-powered icebreakers to patrol the Arctic Ocean, and also on Sukhoi Su-34 fighter-bombers, Su-30SM and Su-35S fighter jets, and Kamov and Mil combat helicopters to patrol Arctic skies.

Russia's Su-35s are at home in the cold. Photo source: Wikimedia Commons.

Arctic rubles
Why all the attention on the Arctic? As private "geopolitical intelligence" firm Stratfor explained: "Melting ice has opened up new transit routes and revealed previously inaccessible oil and mineral deposits." Indeed, Stratfor estimated that under the Arctic icecap lie hydrocarbon deposits making up "30 percent of the world's undiscovered natural gas and 13 percent of its undiscovered oil reserves."

While several nations -- Canada, Denmark, Norway, and the U.S. -- also have territorial claims to the Arctic, securing these energy reserves for Russia, according to Stratfor, "remains a top priority for Moscow. The planned militarization of the Arctic is already under way, and funding is secured through 2015." 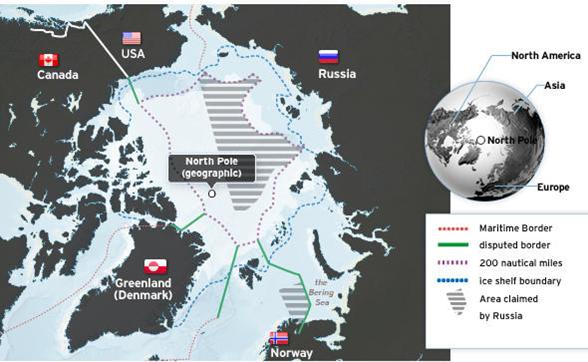 Territories the polar states are entitled to... and also what Russia claims. Source: CIA.

What does it mean for investors?
Russia's claim to exclusive sovereignty over certain portions of the Arctic -- and its military spending to enforce those claims -- raises all sorts of implications for politicians, for generals, and even for investors. This is even true if you doubt, as I do, that Putin wants to start a shooting war in the Arctic.

To get a handle on the strategic implications of Russia's defense spending in the Arctic, I reached out to retired U.S. Army Col. David Hunt, who's been monitoring Russia's moves in the region.

According to Hunt, Russia doesn't need to start a war, or even deploy a sizable force, to benefit from a strategic move into the Arctic. Rather, it will be sufficient for Putin to simply "put a flag on" a piece of territory containing oil and gas reserves, and "he'll own that ground."

As Hunt explained, regardless of the legal enforceability of the claim, if no one else arrives to stake a competing claim, "Putin wins by default." And if another government does stake a claim, but does so after Putin has gotten there first, the new claimant will be presented with "two choices: negotiate, or shoot him off it."

Again, assume no one wants a shooting war in the Arctic. This means that by moving first into the Arctic, and making a relatively small initial investment in military hardware to support the move, Russia is positioning itself to receive offers from the likes of ExxonMobil (XOM -1.54%) and ConocoPhillips (COP -1.27%), both of which have assisted the nation in oil drilling in the past, to exploit "Russia's" new Arctic oil and gas reserves.

The upshot: Russia depends heavily on oil and gas revenue to drive its economy. So from Putin's perspective, continuing to spend on defense in the Arctic actually makes sense -- even when such spending seems to detract from a "hot war" far to the south. Meanwhile, President Barack Obama's proposed fiscal 2016 U.S. defense budget doesn't mention the words "Arctic," "oil drilling," or "icebreaker" even once.

That's bad news for defense contractors such as Huntington Ingalls (HII -0.82%), which had been hoping to help build the icebreakers that would ensure U.S. access to the Arctic. It might be even worse news, though, for America's oil companies.

Fool contributor Rich Smith does not own shares of, nor is he short, any company named above. You can find him on CAPS, publicly pontificating under the handle TMFDitty, where he's currently ranked No. 306 out of more than 75,000 rated members.