The lottery may be a fun distraction, but it's no way to plan for your future financial security. Despite that fact, everyday investors make big bets on high-risk stocks that are at best big-time gambles and at worst akin to buying losing lottery tickets destined for the waste bin. Sometimes, these high-risk bets pay off, but it's rare, and that means investors might want to approach companies like these three with a healthy dose of caution.

Cheryl Swanson: I have nothing against playing the lottery. Plunk down your dollar, have some fun daydreaming about winning, but realize the lottery as a financial investment is worthless. (The odds are terrible: one in 22 million on a $1 play for the New York Lotto.) But when it comes to real investing, you're risking more than a buck, and one biotech I'm especially wary about is Aegerion Pharmaceuticals (NASDAQ: AEGR).

Aegerion caught the eye of investors when its drug Juxtapid (for a rare disease that prevents the removal of bad cholesterol from the blood) won FDA approval 2012. Juxtapid's sales took off straight out of the gate, and Aegerion's stock nearly tripled. But a number of regulatory and legal problems, combined with two cuts in the company's sales guidance in 2014, changed the picture. The company's share price fell more than 67% in 2014.

In an 8-K filing on Jan. 12, the drugmaker disclosed that it's the subject of a U.S. Justice Department investigation into its sales and marketing of Juxtapid. The company said it is cooperating with the continuing investigation and that it intends to defend itself vigorously.

Aegerion now forecasts net product sales this year to be between $156 million and $158 million, down from its initial forecast of $190 million to $210 million. With declining sales, an SEC investigation, and a yearlong slump in its stock price, this is my definition of a perilous investment. Aegerion could end up an acquisition target, and pressure is increasing for the CEO to step down, according to Reuters, so maybe there's still hope for Aegerion's investors. But still, I'd be extra careful on this one.

LeoSun: Shares of Zogenix (NASDAQ:ZGNX), which fell nearly 70% over the past year, are as reliable as lottery tickets.

Zogenix's main product, Zohydro ER, is an extended-release version of the painkiller hydrocodone. Zogenix initially expected Zohydro to generate peak sales of $300 million -- a big boost for a company that reported only $17 million in revenue in the first nine months of 2014. Yet Zohydro's FDA approval last year was controversial because it could be crushed or dissolved for recreational drug use. Several years ago, a similar opioid painkiller, oxycodone, was abused that way and implicated in thousands of deaths.

In response, Zogenix developed an "abuse deterrent" (i.e., hard to crush or dissolve) version of Zohydro, which was approved on Jan. 30 and could launch this spring. However, Purdue Pharma, Teva Pharmaceutical, and Pfizer have also been developing abuse-deterrent opioid painkillers that could hurt Zohydro ER sales in the meantime. In fact, Purdue's Hysingla ER, an abuse-deterrent hydrocodone drug, was recently approved and launched.

Other catalysts might help Zogenix bounce back. If Purdue's Hysingla hits certain sales milestones, Zogenix will be eligible to receive royalties on the drug. Zogenix also recently acquired Brabant Pharma, which netted it the rights to an experimental treatment for Dravet syndrome. Unfortunately, those factors don't fully offset the risk of competing drugs forcing Zohydro ER, its main source of revenue, off the market before patients can switch over to the abuse-deterrent version.

Brian Orelli: Exelixis (NASDAQ:EXEL) is down more than 70% over the past year after disappointing results from clinical trials testing Cometriq in prostate cancer. The drug is approved for treating thyroid cancer, but that is an extremely small market; prostate cancer was supposed to increase Cometriq's sales substantially. 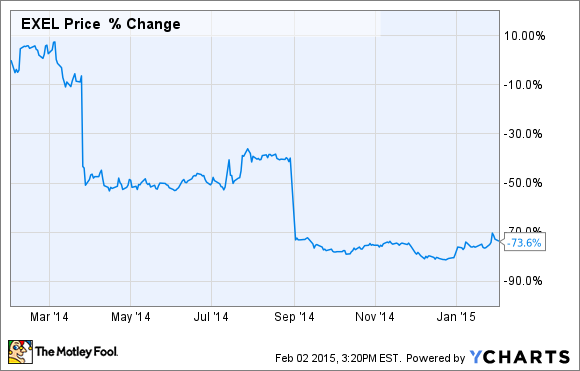 The biotech has been left for dead, but there remains potential for a revival. Exelixis is still testing Cometriq in liver cancer and kidney cancer. A pivotal trial in the latter is scheduled to read out this year. The drug certainly has some activity, given the approval in thyroid cancer and improved progression-free survival in prostate cancer, but it's hard to know the likelihood of success in liver and kidney cancer, given the lack of overall survival in prostate cancer.

While buying Exelixis is kind of like buying a lottery ticket, taking a long shot can be a financially good decision. In Cheryl's example, if the prize to hit all the numbers in the New York lottery is more than $22 million, the financial odds are technically in your favor even if it's a long shot -- assuming you don't have to split the prize with other winners.

Exelixis could be the same kind of situation on a smaller scale. It's not hard to see the stock price getting back to where it was before the negative prostate-cancer data was released if the drug helps kidney cancer patients. Just remember: As with lottery tickets, you shouldn't invest your life savings (or anywhere near it) in biotechs.