The GMC Yukon and GM's other big SUVs were all-new last year. Reviewers have praised them for attributes not historically associated with GM: quietness and build quality. Sales have been extremely strong. Source: General Motors Company.

It may seem like an absurd question at first glance, because GM had a very tough year in 2014.

Its announcement last winter of a series of recalls that should have been taken care of years ago triggered a big public outcry. Just a few weeks into her tenure, new CEO Mary Barra was faced with lawsuits, heavy fines, harsh lectures from regulators, Congressional grillings -- and a federal criminal investigation that will probably require a hefty cash settlement to resolve.

To her credit, after some early stumbles, Barra responded well. She overhauled GM's internal safety procedures in positive ways, cooperated fully with stiff directives from federal regulators, and ordered recalls of millions more vehicles in an effort to ensure that GM didn't have any other overlooked safety issues lurking in its past.

So back to the big question. With Barra's safety overhaul firmly in place, the recall mess maybe starting to fade in the rearview mirror, and a slew of new GM products arriving in showrooms, might General Motors stock be a buy?

As I write this, GM's shares are trading at about $36, giving GM a market cap of roughly $58 billion. With just $2.8 billion in net income, or $1.65 per share, over the past 12 months, that gives GM a price-to-earnings ratio of almost 22 -- more than double its historic valuation of about 10 times earnings.

That's expensive compared to GM's key global rivals, as the following chart illustrates. But it's not the whole story. 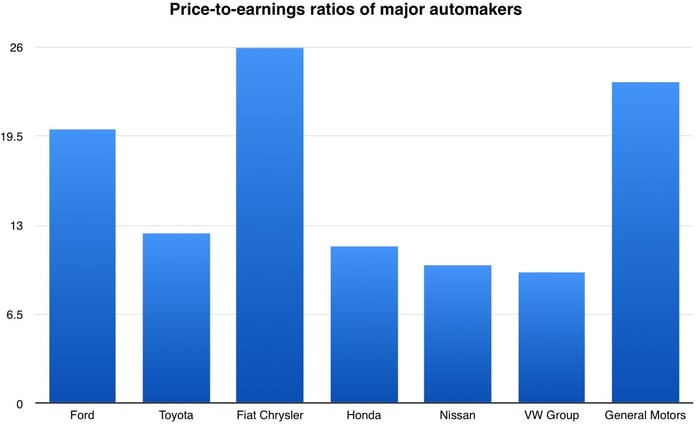 GM's full-year earnings before interest and taxes was $6.5 billion. That includes the impact of $2.8 billion in costs related to the 2014 recall mess, GM said last week -- costs that (we hope) won't hit GM ever again. Add those costs back in, and we get a price-to-EBIT ratio of about 6.2. By that standard, GM stock might be starting to look like a good value.

But is it really? Let's consider the fundamentals.

Investors were cautiously optimistic when Barra took over as GM's CEO in January of last year. On one hand, she had impressed in her prior role, where she drove a big overhaul of GM's product-development processes. The results: Around $1 billion a year in cost savings, faster time to market, and significantly improved products -- a win-win-win.

On the other hand, Barra has spent her entire career at GM, and observers wondered whether a GM lifer was the right choice to drive a long-needed cultural change at the old Detroit automaker.  Those worries were magnified by her initial response to the recall mess -- but she rose to the challenge, settling quickly with regulators, winning over members of Congress, and using the recall scandal to drive important changes within GM.

That isn't all that has changed at GM. Barra frequently talks about making GM the "most valued automaker," and has set big goals to do that. Those goals involve improving GM's fundamentals, like sales and profits and cash flow -- as well as a strong and growing dividend. She also emphasizes that GM's mission is now to "win customers for life," with great products backed by strong brands.

These things may sound ordinary, but the basics of satisfying customers and improving fundamentals have eluded GM management teams for decades. Barra's team talks a very different game, and it's becoming more and more clear that this isn't just talk.

And speaking of Cadillac, the appointment of longtime Audi and Infiniti executive Johan de Nysschen as the new president of the Cadillac brand -- with unprecedented freedom to operate the brand outside of GM's traditional structures -- may prove to be a masterstroke. It may take a decade to fully realize, but GM's long-held goal of a revitalized, global Cadillac making a significant contribution to the company's bottom line now appears within reach. This is important: The Audi and Porsche luxury brands drive much of rival Volkswagen's huge profits. That example has not been lost on GM.

De Nysschen's hiring is said to have been orchestrated by Ammann, with Barra's enthusiastic support. Ammann, a former Morgan Stanley analyst, impressed Wall Street in his prior role as GM's chief financial officer. And Reuss, the son of a former GM president, brings much-needed passion to the role he refers to as his "dream job" -- along with hard-headed business and operational wisdom, and the respect of GM's deep and talented product-development ranks.

GM's balance sheet is solid, and its bottom line is poised to grow

GM has plenty of cash, and big credit lines -- a total of $37.2 billion worth of liquidity available to its auto business as of the end of the third quarter. On the other side of the ledger, there's just $9.4 billion of long-term debt, much of it carried at low interest rates.

GM's U.S. sales gains have been modest this year -- up just 3.1% through November, versus a 5.4% gain for the market as a whole -- but improved new models like its pickups and SUVs have helped it increase its profits per sale. GM's operating margin in North America was a solid 8.7% last quarter, slightly ahead of rival Ford's  8.4% result -- and roughly in line with GM's long-term goal for the region.

Cadillac's U.S. sales were down last year after a strong 2013 (a 5.8% decline this year through November), a drop GM blamed on the brand's effort to realign itself with higher price points. But the brand's global sales were actually up 5% last year, thanks to a 47% gain in China.

That's just a start, of course. Like Ford, GM still has work to do overseas -- but also like Ford, that work is getting done. GM has an enviable position in China's huge auto market, where its market share is second only to Volkswagen's -- and it's spending heavily on new factories and facilities to keep pace as the market grows.

Meanwhile, in Europe, GM's Opel subsidiary has posted years of horrific losses, but an end to those losses is in sight. GM has installed a new management team at Opel, brought the long-neglected brand fully into GM's global product plan, closed a key factory, and revitalized the brand with key new products. GM's European Opel and Vauxhall brands have begun sharing products (and costs) with the Buick brand, which is sold in the U.S. and China, giving it global scale. That relationship has already paid off with better products for Opel and improved profitability all around.

The upshot: GM is determined to boost profits, and it's time to take it seriously

General Motors spent so many years pushing second-rate (or worse, sometimes far worse) products that it's still hard for some investors (and consumers) to take the company seriously.

But there's more and more evidence that post-bankruptcy GM really is a different company. The products have become very competitive, the financial discipline of its current leadership is evident in every quarter's results, and its deep -- but long-overlooked -- research and development resources are bringing genuine innovations to market.

All of that means that it's time to take seriously the statements that Barra and Ammann have been making about their goals for GM. GM is targeting EBIT profit margins in the 9% to 10% range by "early next decade," up from 4.2% last year.

Wall Street is already starting to catch on to the story unfolding at GM. The stock briefly dipped below $30 in October, but it has risen over 20% since then. It may be a bumpy ride over the next year or two -- a big fine or litigation settlement related to the recalls could still come, and that might hurt -- but as a longer-term investment, GM has a lot going for it.