McCormick & Company (NYSE:MKC) delivered a good set of fourth-quarter earnings that came in slightly ahead of estimates. However, investors will be equally interested in management's guidance. Let's take a look at the underlying trends in the earnings report that came out Jan. 28 and management's outlook for 2015.

Adjusted EPS came in at $1.16, beating analyst estimates by $0.02, but don't get too excited. On the earnings call, CEO, Alan Wilson outlined that the company benefited from a lower tax rate and an "excellent result" from its joint venture in Mexico.

Moreover, Wilson began summing up the results for the full-year by saying:

We met our fiscal year 2014 sales objectives and exceeded the cost savings target. However, adjusted operating income growth at 3% was below our initial range of 6% to 8%. A major reason was the more rapid growth in international markets, but slower growth in more profitable U.S. businesses.

In other words, trends in the fourth quarter and the full year were pretty consistent. Sales are being pressured by increased competition in the U.S. consumer market, and weak end demand from its industrial customers.

A quick look at segmented revenue demonstrates how sales growth slowed down in 2014 -- particularly in the consumer segment. 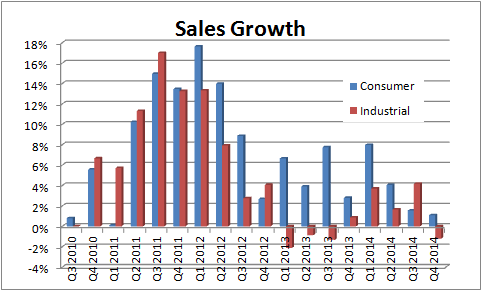 With this in mind, the slowing sales growth in the consumer segment is a particular concern. When speaking on the earnings call, Wilson outlined the competitive pressures coming from U.S. retailers "bringing smaller brands on the store shelves." It's a move that has differentiated the spice and seasoning market, because the smaller brands include "value priced products, ethnic brands and premium as well as organic items," Wilson said.

However, while sales growth is slowing, McCormick has managed to hold margins up in both its segments. Incidentally, the consumer segment has a sawtooth pattern -- something to consider. 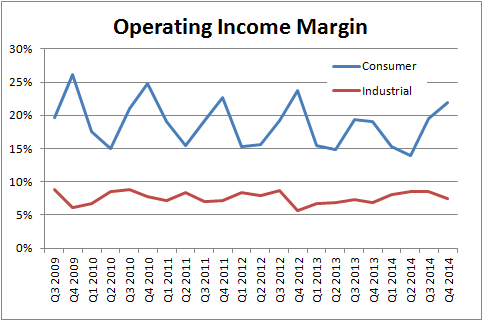 Innovation to the rescue
McCormick's management believes that product innovation is the key to maintaining and growing sales. Indeed, on the earnings call, Wilson said that "our 2015 sales growth projection includes a strong impact from innovation."

Moreover, he argued that the company was in "a much better position" than it was a year ago within the U.S. consumer segment. His optimism seems to be based on new product development, and the company's efforts to build brand awareness through marketing initiatives.

Innovation is a common theme across the board, as Wilson declared that 8% of 2014 sales (across both businesses) came from products launched in the last three years. Indeed, the industrial segment generated "much of its growth in 2014" from innovations in seasoning of chips, snack bars and crackers.

The bottom line
Putting all of this together, McCormick is a company that generated 3% local currency sales growth in 2014, but expects to grow local currency sales by 4%-6% in 2015. Moreover, much of its growth in 2014 came from innovation and investments in brands, while competitive pressures built up in its key U.S. consumer business, and end-demand weakened in parts of its industrial business.

Time will tell if McCormick hits its targets in 2015, and the success of its ongoing innovation programs will dictate matters to a large extent.