Tesla Motors (NASDAQ:TSLA) stock is down about 6% so far today after the company posted fourth-quarter results below market expectations and missed its own guidance for vehicle deliveries. Here's what investors need to know.

Tesla cited a number of factors for missing its guidance, including trouble with deliveries due to "severe winter weather and shipping problems (with actual ships)." This is the first quarter in the last seven that Tesla missed its guidance for deliveries. Demand, the electric-vehicle maker insists, was not the issue. In fact, Tesla said it entered 2015 with over 10,000 orders for the Model S and almost 20,000 reservations for its upcoming crossover Model X.

For a growth company such as Tesla, running its business close to non-GAAP loss on an annual basis as it invests gross profit heavily in growth measures, missing deliveries in a given quarter will inevitably create volatile headwinds on reported earnings. Tesla's non-GAAP earnings-per-share loss of $0.13 was well below below the expectation for a gain of $0.31. 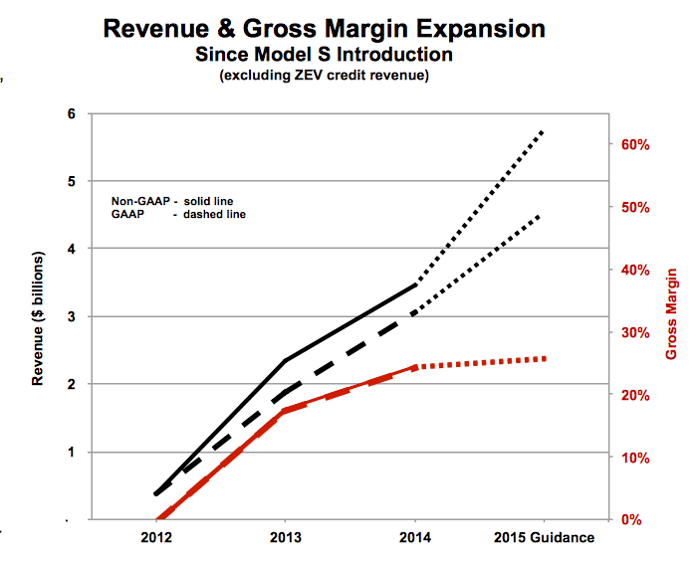 For 2015, Tesla said it expects to deliver about 55,000 Model S and Model X vehicles -- a projection in line with management's previous comments. The Model X, which is scheduled to go on sale in the second half of the year, would only account for a fraction of these sales as the company begins the initial ramp-up in deliveries.

What should investors make of the quarter?
The quarter was definitely worse than expected -- even worse than management anticipated. And it is Tesla's near-term execution that provides confidence in the company's ability to execute on its ambitious long-term goals. So, if anything, the quarter's news might be reason for investors to show a little more skepticism about Tesla's forward-looking growth story.

But in the grand scheme of things, Tesla is still proving it can execute incredible growth very well. Consider: Tesla's fourth-quarter deliveries rose 43% from the year-ago quarter, and its 2014 gross profit of $882 million was up $93% from the $456 million reported in 2013. Furthermore, construction of the all-important Gigafactory, aimed to support the production of enough battery packs for 500,000 cars by 2020, remains ahead of the initial schedule. Tesla said it will begin equipment installation in the factory later this year and start battery production, in partnership with Panasonic, by 2016.