The most severe oil crash since the financial crisis has sent oil companies and petro states reeling. 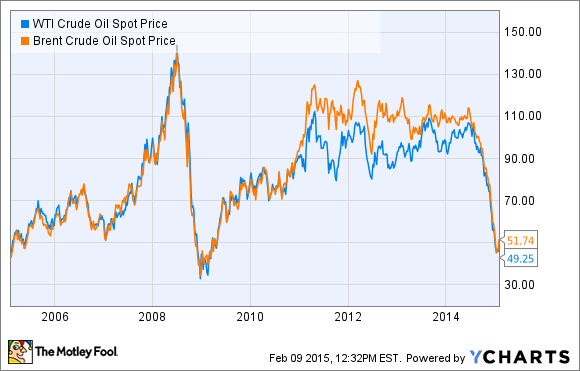 Recently Kinder Morgan Inc (NYSE:KMI) founder and CEO, Richard Kinder, stated his view that "OPEC has in effect abdicated its role as the force setting oil pricing in the world." Mr. Kinder went onto explain how he views America's role (and by extension, the role of his company, which operates the largest pipeline system in North America) as one of increased importance in a world where OPEC's power is in decline.

A free-market approach in the future, is a very interesting concept and I think will stand a lot of old assumptions on their head. One of those things is that I believe it will make the U.S. a much more important player in the role of setting worldwide prices and I think we are already seeing that today. -- Richard Kinder

Could long-term low oil prices really mean the effective end of OPEC's pricing power? More importantly are such predictions any use to long-term investors? History teaches us that the answer is most likely "No".

Why you should ignore such predictions
It seems like anytime oil prices either spike or crash a slew of "experts" come out of the predict that this commodity cycle is
"a game changer" and that OPEC is on its last legs. Yet history shows that tensions between members of OPEC, and waxing and waning pricing power for the cartel is nothing new.

For example, crashing oil prices produced similar economic hardships for petro states like Iran, Venezuela, and Nigeria back in the 1980's when oil prices declined to even lower levels. Similarly in 1998 Saudi Arabia led a price war against Russia that hurt many of its members and OPEC turned the taps on full throttle when oil hit record levels in 2008 just prior to the financial crisis. Each of these times analysts would come forth proclaiming the death of OPEC's influence on global prices. Yet as we saw with this current oil price collapse, it was OPEC's decision to stand firm on production in November that brought about a near free fall in oil prices. Thus it seems that analysts' views that each new commodity cycle price collapse or spike represents a "this time is different and permanent power transfer" is as cyclical as oil prices themselves.

OPEC's power rests almost exclusively with Saudi Arabia and isn't going away anytime soon
While I understand the general argument and that new investors might be in awe of the kind of wild price swings we're seeing in oil, I think declaring the end of OPEC is premature. Saudi Arabia is still the world's largest swing producer, with 2.8 million barrels per day of spare capacity.

In a world where a 1 million barrel per day oil glut can cause a 60% price collapse, Saudi Arabia's enormous spare capacity means it can have an enormous influence on world oil markets even if OPEC were to break up completely--which is highly unlikely. That's because smaller oil producers such as Venezuela, Nigeria, and Algeria are price takers. With no spare oil capacity to speak of and very shaky state finances that are overwhelmingly dependent on oil revenues, they simply can't afford to do anything but pump at full production most of the time. Only membership in a cooperative cartel like OPEC, which has enough market power to affect crude prices, gives them chance of affecting their economic well being.

Bottom line: OPEC tensions are nothing new and long-term investors should avoid speculating about the death of the cartel
Weaker OPEC members such as Nigeria, Venezuela, and Algeria may complain and lobby for production cuts to support higher oil prices, but in reality OPEC's ability to influence oil market prices rests mostly with its core members, especially Saudi Arabia. However, I'd urge long-term investors, especially those who haven't experienced the kind of wild volatility we're now seeing, to avoid speculating on oil prices in general, and the death of OPEC in particular.

Oil is a highly volatile commodity, it always has been and likely always will be. Experts, analysts, and an investment media hungry to fill the 24 hour news cycle have a vested interest in making bold proclamations about potentially historic, "game changing" events because it buys them publicity and increased viewership. The fact that their predictions are almost always proven wrong doesn't matter because there is almost never any follow up to see how accurate they were. In my opinion the best thing that long-term investors can do to profit on oil's eventual recovery is to focus on the tried and true fundamentals of investing because numerous studies prove that market timing and short-term speculation doesn't work for the average investor.

Buy quality oil and oil related stocks, especially when they are trading at fire sale prices. Use dollar-cost averaging to invest new discretionary cash if prices fall further, thus lowering your average cost basis and locking in a higher yield. Most importantly ignore the kind of media hype and speculative predictions and hold for the long-term. While this common sense approach may not be as exciting or offer the allure of "get rich quick" speculative schemes, history shows that it's your best chance to beat the market in the long-term.