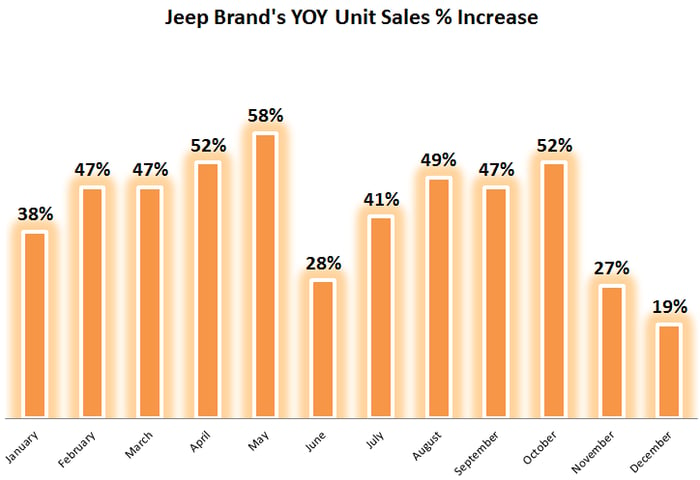 Overall, Jeep's sales rose by 41% last year and accounted for more than two-thirds of Fiat Chrysler Automobiles' 16% increase in U.S. sales for 2014. As Jeep is one of five Fiat Chrysler brands in the U.S., the fact that it nearly single-handedly powered the automaker's overall sales gain is impressive -- particularly when you consider that Fiat Chrysler's spike in year-over-year sales gains was higher than that of any other major automaker.

Thanks in part to Jeep's all-new 2015 Renegade, which will hit dealerships toward the end of this month, Jeep's sales figures should remain strong. Here's why.

Product gap
There's no question consumers love Jeep Wranglers, Cherokees, and Grand Cherokees. Those vehicles are adventurous, tough, and can even be sleek and modern, depending on the trim. One thing they're not, though, is cheap. Jeep knew it needed a less costly entry point for consumers looking to buy into the Jeep lineup. The automaker attempted that strategy with the Compass and Patriot models, but the products failed to impress and sales failed to move the needle.

Jeep believes it has learned from its mistakes and has improved the 2015 Renegade to offer a variety of powertrain options, similar to its Cherokee strategy. In North America, the Renegade will come with a 1.4-liter turbocharged inline four-cylinder engine that produces 160 horsepower and 170 pound-foot of torque and a six-speed manual. Another option is the slightly more powerful 2.4-liter inline-four that pushes out 184 horsepower and 177 pound-foot of torque.

With those engine options, fuel economy should reach 30 miles per gallon, and that's great, as fuel economy remains the most important factor for consumers looking to purchase a new vehicle. In addition to positioning the Renegade as an entry-level product, Jeep has also zeroed in on millennials as the vehicle's target consumer.

TrueCar projects that millennials will purchase 4.24 million, or nearly one-fourth of the estimated 17 million new cars to be sold in the U.S. in 2015. Those sales to millennials are estimated to be worth $135 billion in total revenue.

Of course, the Renegade will only serve a portion of that pie -- the subcompact SUV segment -- but it's a piece of the pie into which Jeep currently sells zero products.

In addition to the sales going into what is now a segment void for Jeep, the Renegade's starting price of $18,990 is the right price point for millennials. Now, the trick is for Jeep to attract my generation's attention -- a task that could prove difficult in today's world of ever-increasing marketing and advertising noise.

What's a marketer to do?
In an effort to lure my generation into Jeep showrooms, the brand is partnering with NBCUniversal to make a marketing push on social media and TV. Starting last week, NBCUniversal is airing spots on its Bravo, E!, and Syfy cable channels encouraging viewers to share photos of their "Renegade spirit" using the #RenegadeLifeContest hashtag on Twitter. Some early submissions depict cancer survivors and other adventurers. Using social media could be a great way to attract millennials to the entry-level Jeep Renegade.

"Social media remains an extension of our networks' brands, and we're excited to harness the audience reach and engagement to launch the all-new Jeep Renegade," said Alison Tarrant, executive vice president of the Client Solutions Group at NBCUniversal, in a press release.

Time will tell if Jeep can indeed lure millennials to its entry-level product, but it's clear the Jeep brand is incredibly important to Fiat Chrysler Automobiles, and the 2015 Renegade could play a critical role in roping in a new and younger consumer. The Renegade's launch also comes at an opportune time, with gas prices sinking and with easily available credit with which young consumers can make large purchases.

If Jeep hits a home run with the Renegade, expect investors to buy into FCA's stock and long-term turnaround story even more.