However, in Apple's (NASDAQ:AAPL) case, its share repurchase program has been an unqualified success that has dramatically benefited shareholders since its inception.

The best kind of plunge
With regards to how a share repurchase program ultimately affects shares outstanding, just take a look at how Apple's shares outstanding has plunged in recent years. In this case, plunging is a good thing for investors. 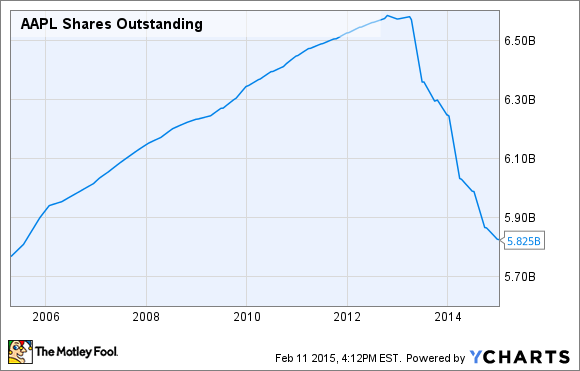 In just over two years, Apple has reduced its total shares outstanding by 12%, bringing its share count to levels that the company hasn't seen in a decade. That's how earnings-per-share growth has outpaced net income growth in recent quarters. For instance, last quarter earnings per share soared 48%, easily outpacing net income growth of 39%.

To date, Apple has repurchased nearly $73 billion in shares. That's an incredible sum that exceeds the market caps of most companies. Buying back that much stock inevitably reduces shares outstanding by a lot.

Apple is cheap
In the wake of last quarter, Apple continues to push higher into uncharted territory, hitting fresh all-time highs and just recently becoming the first company to ever top $700 billion in market cap. In fact, if Apple hadn't been repurchasing shares so aggressively, its market cap would be closer to $810 billion right about now.

Needless to say, Apple's timing on its repurchases has been quite successful. The company bet big on itself during the pullback that occurred in 2013, which has paid off handsomely. Apple has long been cheap by many traditional valuation metrics (even now Apple trades at a discount to the S&P 500), so it may have seemed like an easy call from management's perspective.

Perhaps the most badly timed share repurchase program in recent memory was Netflix's terrible trade in 2011, where the online video streamer bought back shares at $221 only to turn around and sell shares to institutional investors ... at $70 per share. At the time, Netflix was trading at 70 times earnings, calling into question how prudent the buybacks were. With shares now over $450, it's all in the rear view mirror, but Netflix did destroy quite a bit of shareholder value with its poor timing.

For now, Apple's share repurchase program has worked wonders for investors thanks to its sheer size and accretive effects. The company's timing has also been fortunate, taking advantage of the prolonged dip to invest in itself.